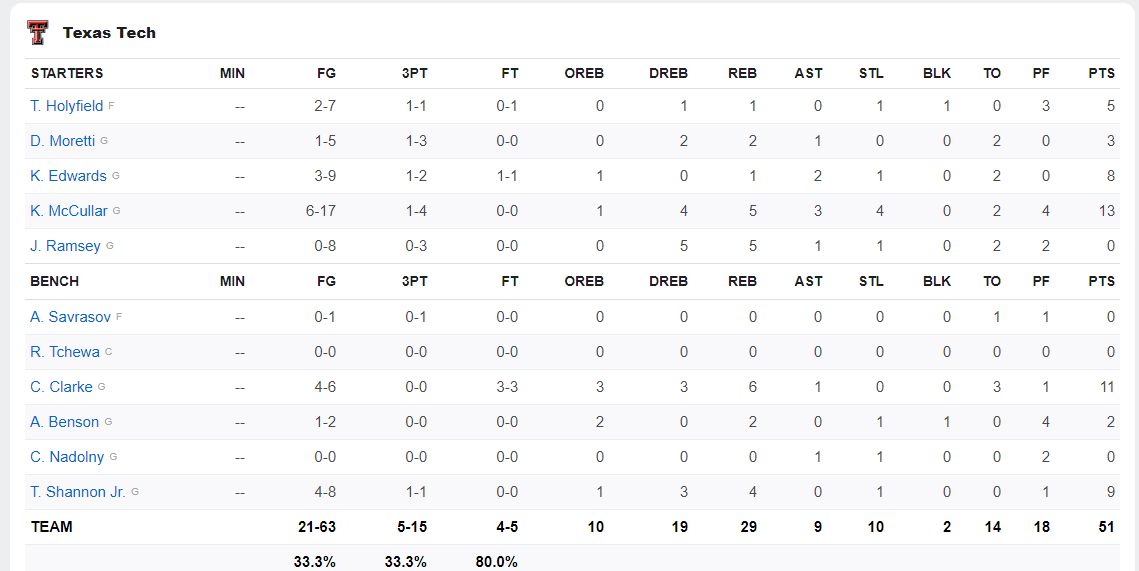 Player of the Game | I was thinking early on about giving this one to Clarke, but McCullar really played his butt off even if his shots were not falling as well as I’d of liked to see. Nobody was better across the board, or scoring a lot in this matchup. KMAC had a line of 13 points, 5 rebounds, 4 steals, and 3 assists. He was the best all around player of the game for TTU.

Stat of the Game | 33.3% shooting on 21-63 shots, with 5-15 three pointers seem to stick out the most. I was tracking the shooting percentage and around 10 minutes into the game the Red Raiders were just barely over 20% FG shooting with ZERO three point makes. At the half we were shooting a measly 28% and were 2-7 from downtown while down by 10 points. Also, I will get more to it in the game observations, yet Ramsey going 0-8 and having ZERO points was a stat that just sort of puts this game into perspective for how poor we shot the ball.

How the Game was Lost | We came out flat and looked sloppy from the beginning whistle. OU was bigger, stronger, and more aggressive than our team. Texas Tech knows how to play small ball, and can beat bigger stronger teams on most nights… but, I did not see the usual scrappiness and determination we have become accustomed to witnessing the squad play with. We plain and simply got our butts whipped by the Sooners from the get go. TTU could not get the buckets inside, and weren’t draining much from outside the paint. A terrible combination. It seems that the Sooners studied our frontcourt weakness and exploited it on both ends of the court all game long.

Just couldn't get anything to fall.