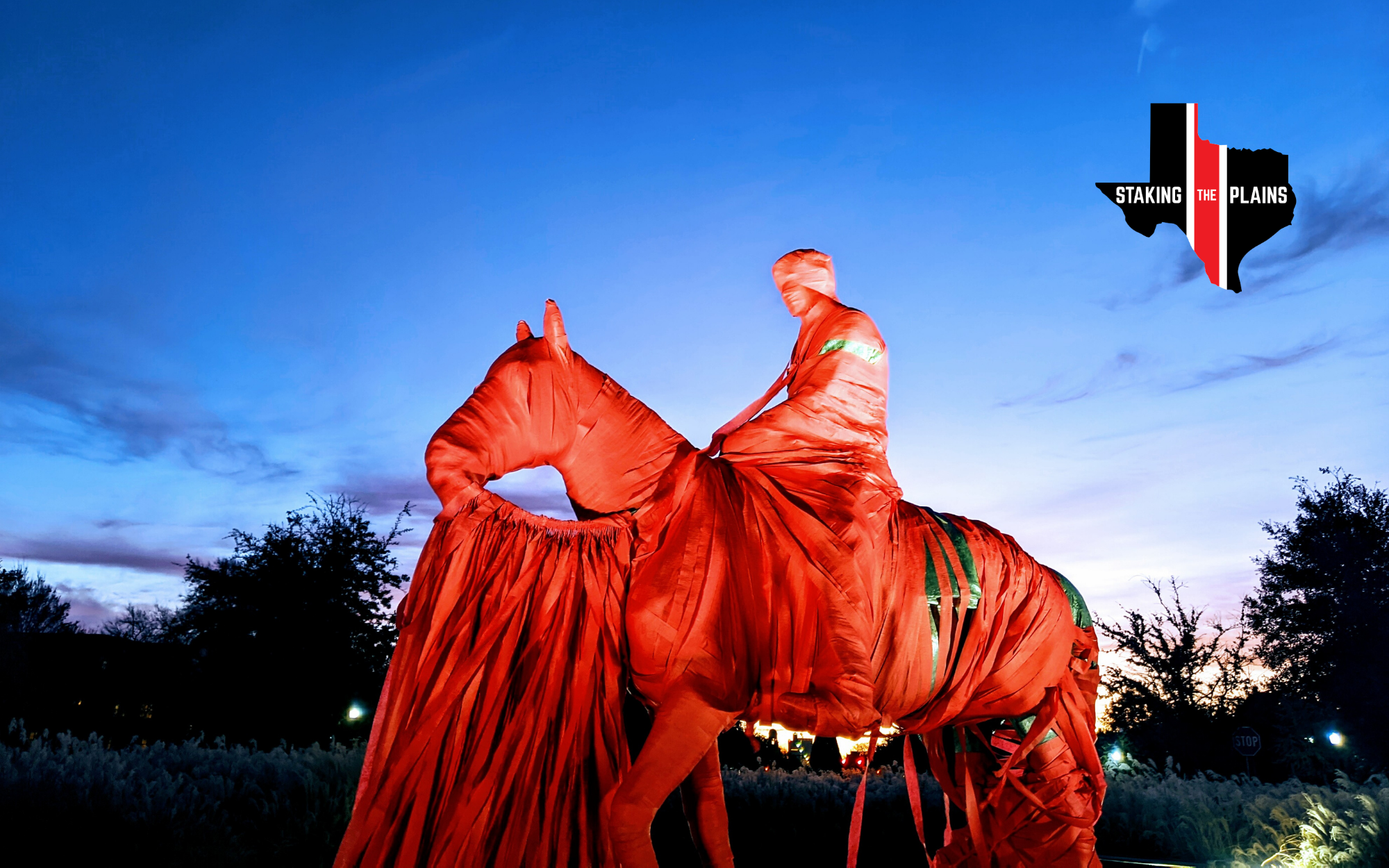 So far, we’ve asked what would have happened if Texas Tech had been left out of the Big 12 back in the 1990s or if they’d bolted to the Pac-16 in 2010. We also wondered what might have been if Rich Rodriguez was Spike Dykes’ replacement instead of Mike Leach, as well as if Leach’s replacement had been Ruffin McNeill instead of Tommy Tuberville.

Now let’s fast forward to that guy’s replacement. Texas Tech obviously needed to hire someone in December of 2012 after Tommy Tuberville dumped a recruit at the dinner table and crawled out the bathroom window so he could go yell at Cincinnati fans to go to hell and then run for Senate in Alabama (it’s been a strange decade for Tubs).

Texas Tech opted to bring home one of its native sons in Kliff Kingsbury, a move that energized and healed a fractured fan base. But then Clemson offensive coordinator Chad Morris was the other alleged finalist for the job. So let’s ponder, what if Texas Tech had hired Morris instead?

One of the first things that jumped to mind for me was Chad Morris’ connection to Lake Travis High School. Morris was the head coach there in 2008 and 2009. If Lake Travis rings a bell, it’s because it should. They won five straight state championships from 2007 to 2011 and won a sixth in 2016. They have churned out some serious quarterback talent over the years from Todd Reesing at Kansas to former Gatorade National Player of the Year Garrett Gilbert, who filled in for Colt McCoy in Texas’ national championship bout against Alabama before transferring to SMU. Lake Travis also produced brothers Michael (Texas Tech and Virginia Tech) and Charlie Brewer (Baylor).

In between all that, Lake Travis also produced some guy named Baker Mayfield.

If Chad Morris’ first year at Texas Tech (2013) coincided with Baker Mayfield’s freshman season, would Morris have offered Mayfield a scholarship before he ever enrolled? Davis Webb was the quarterback from that high school class, but other schools made a push for Webb once Tuberville left. Would Morris have politely recommended Webb move on and taken Mayfield as his scholarship quarterback for the 2013 class, assuming Mayfield had a recommendation from the coaches at Lake Travis?

Would Mayfield have ever transferred to Oklahoma? It’s less likely, and even if he did, there would be no “Baker Mayfield rule” about walk-ons not losing a year of eligibility for transferring within the conference. If Mayfield started at Texas Tech on scholarship and left for OU anyway, he would have lost a year of eligibility. That year would have been 2017, when Mayfield won the Heisman Trophy. Would Bryce Love, Lamar Jackson, or Saquon Barkley hoisted the trophy instead? Or would Kyler Murray have simply become the starter and Heisman winner one year sooner?

Would Baker Mayfield have stayed at Texas Tech and been a multi-year starter? If so, do we see any of Mahomes until 2017, or does Mahomes seek playing time elsewhere? Does Michael Brewer finish out his career as a Red Raider if Morris is his head coach? Does his younger brother Charlie enroll at Tech instead of Baylor? Does Baylor win 11 games this season without Brewer?

A lot of the college football landscape could have been altered due to one high school connection. I don’t like to think about the possibility that Pat never plays here…

Aaron Dickens from RedRaiderSports.com eloquently pointed out that Chad Morris’ next win over a Power 5 opponent will be his first. That’s through five seasons as a head coach. Let’s assume – since there is no other reasonable assumption – that Morris would have struggled at Texas Tech like he did at Arkansas.

In this reality, Texas Tech has already passed on fan favorite Kliff Kingsbury after a divisive coach in Tuberville splintered the fan base. Let’s assume patience is thin and Morris is on a tight leash. Let’s assume Morris is let go after two poor seasons in 2013 and 2014, and that Texas Tech is looking for his replacement during the ensuing coaching carousel.

Who would the realistic options be?

Let’s start with the obvious. How about Kliff Kingsbury? He probably would have stayed at A&M for Manziel’s redshirt sophomore season in 2013 or perhaps taken a head coaching gig at a Group of 5 school. If he’s at A&M in 2013, he’s surely gone in 2014 either as an NFL OC/QB coach or as head coach of a Group of 5 school. Either way, he is very much in play to get a promotion and become head coach of a Power 5 school, especially his alma mater.

But we’ve already lived in that reality, so let’s spice it up a bit.

Following the 2014 season, Ohio State offensive coordinator Tom Herman took the head coaching job at Houston. He was always going to use that job as a stepping stone and probably would have done the same thing to Tech. I’ll pass.

Will Muschamp was fired at Florida in November of 2014. His record there wasn’t great, but you don’t become head coach of the Florida Gators without being highly thought of in the industry. He became defensive coordinator at Auburn instead, but may have been lured away by a head coaching opportunity. Despite his three year stint as DC at Texas, he’s largely been an SEC guy for his entire career so may not have “fit” here. Again, probably passing on Muschamp.

Here’s where it gets really fun…

Bo Pelini was fired at Nebraska following the 2014 season. He was pretty darn solid in Lincoln, winning 9, 10, 10, 9, 10, 9, and 9 games in his seven seasons as head coach. It wasn’t enough for the Cornhuskers, who moved on and have only won nine games in a season once since then. Nebraska was in the Big 10 during the second half of his tenure there, but he had three seasons with them in the Big 12 on top of a couple seasons as DC at Nebraska and Oklahoma earlier in his career. All that to say, he’d probably be a decent fit in the Big 12 and recruiting the state of Texas. Consider me intrigued…

And now the finale, probably who I’d pick if I were AD (and it’s a good thing I’m not!). Gary Andersen, anyone?

His first head coaching stint was at Utah State for four years (coincidentally with Matt Well as his OC and successor). They started slow, winning just four games in each of his first two seasons. Then they graduated to seven wins in 2011 and 12 wins in 2012. Andersen left for Wisconsin, where he won 19 games in two seasons including an appearance in the Big 10 championship game.

He bolted for Oregon State due to academic standards at Wisconsin being too high to recruit many athletes. Andersen struggled mightily at Oregon State, going 7-23 in two and a half seasons. Now he’s back at Utah State as head coach.

Who knows why things didn’t work out at Oregon State? But in 2014, Andersen was a guy coming off 11, nine, and 10 wins in his previous three seasons and who was looking for a landing spot at a Power 5 school. I think Texas Tech is a better job than Oregon State, so if there was any sort of connection he may have been in play and considered a good hire.

But the connection is a question mark. Andersen has no Texas ties or Big 12 ties to speak of, so maybe it wouldn’t have been a smooth transition. Still, it’s an intriguing option.

Alright I’ve rambled enough. What say you? What do you think would have happened if Chad Morris were hired instead of Kliff Kingsbury?