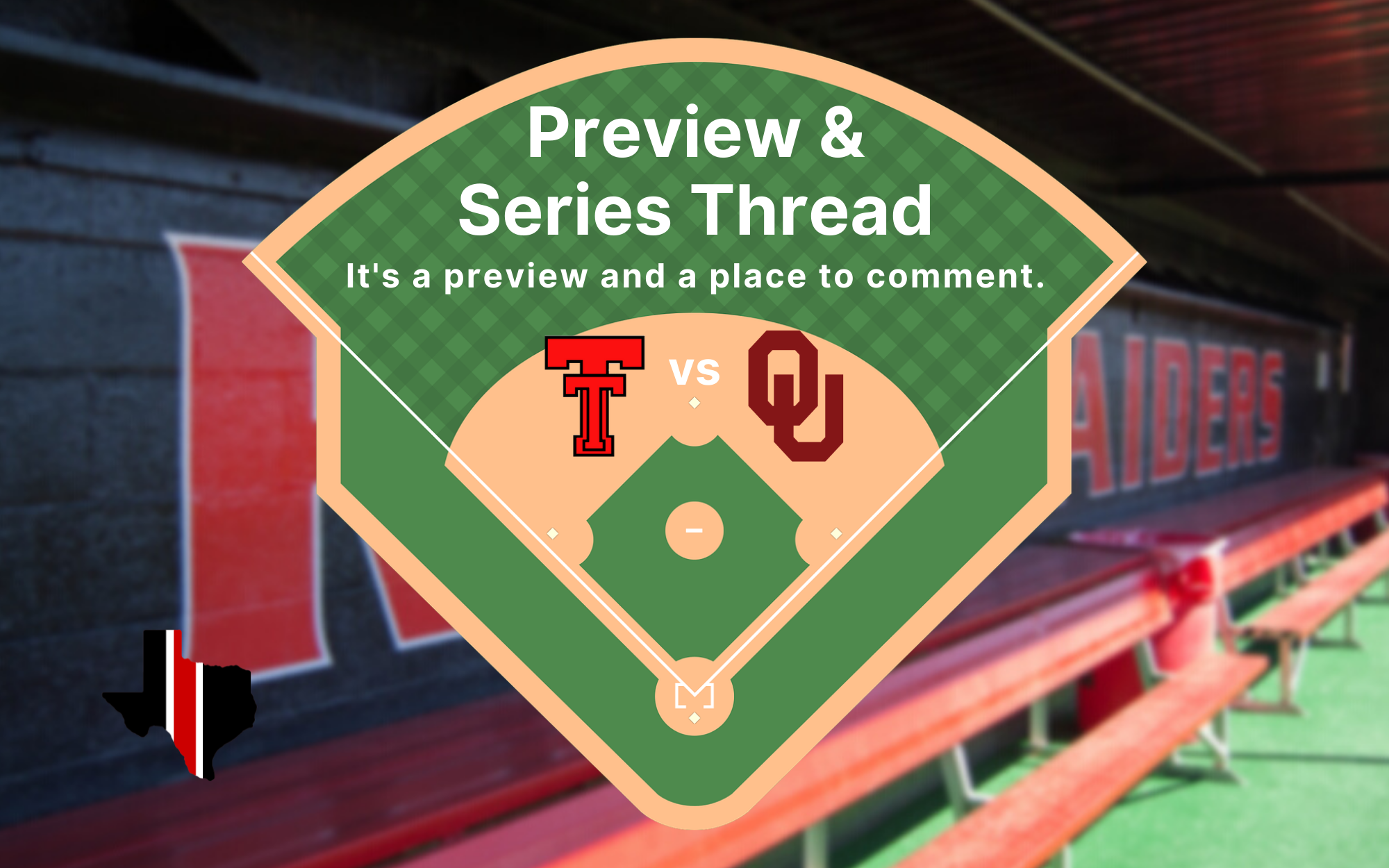 With two weeks remaining in the regular season, the Red Raiders are looking to make a case for a top-8 national seed as they head to Norman. Tech currently sits in third in the Big 12 standings, but boasts series wins over both No. 6 TCU and No. 5 Texas, the No. 9 RPI in the country and a higher strength of schedule (17th) than both the Horned Frogs (21st) and the Longhorns (22nd).

Friday’s matchup between the Red Raiders and Sooners will mark the 92nd all-time between the two programs and the eighth between long-time friends Tim Tadlock and Skip Johnson. Tadlock owns a 15-10 record against Oklahoma since his arrival in 2013. Under his watch, the Red Raiders have won 4-of-7 season series, including a road sweep in Norman in 2019. Tadlock is 5-1 against Johnson since he took over for the Sooners in 2018.

While Tech has been off for 10 days, Oklahoma has played four times. The Sooners went to Morgantown last weekend and earned a series win over the Mountaineers, claiming both games of a Saturday doubleheader (8-7, 9-1) to head home with the series victory. They turned around to play a non-conference game with Oklahoma State on Tuesday in Tulsa, falling 7-3.

Oklahoma scored the winning run on a wild pitch in the bottom of the 10th to claim a 9-8 victory over No. 7 Texas Tech baseball in the opener of a three-game series Friday night at L. Dale Mitchell Park in Norman, Okla.

Tech went yard four times in the May 4 midweek matchup with the Sooners and homered four times once again on Friday, including a grand slam from Cody Masters in the first inning to help Tech cash in on the only free passes OU pitching allowed on the night.

Oklahoma, however, answered with a five-run fourth, capped by a three-run blast from Jimmy Crooks that gave OU a 6-5 lead. The Sooners would then score each of their final three runs on wild pitches, getting one in the fifth to make it 7-5, one in the seventh to go up 8-7, and the game-winner in the 10th.

Dru Baker and Cal Conley hit a pair of grand slams as No. 7 Texas Tech baseball topped Oklahoma 15-2 on Saturday afternoon at L. Dale Mitchell Park in Norman, Okla., to even the three-game series at a game apiece.

Braxton Fulford added a home run as well for the Red Raiders (32-12; 11-9), who bounced back from an extra-inning loss on Friday and have now compiled three grand slams and seven home runs against the Sooners (25-24; 9-11) this weekend.

All nine of Tech’s starters scored Saturday as the 13-run win went down as the program’s largest margin of victory over the Sooners in the 93-game series history. The Red Raiders outhit OU, 14-9, and posted six-spots in the third and seventh innings.

Baker led four Red Raiders with multi-hit games as he finished 3-for-5 with a career-high six RBI. With Tech leading 4-0 in the third, he blew the game open with a two-out grand slam, doubling the score to 8-0. His six RBI marked a season-high for any Red Raider and also tied the most by any Big 12 player in a conference game this season.

No. 7 Texas Tech baseball continued its home run barrage at L. Dale Mitchell Park with five long balls on Sunday to run-rule Oklahoma, 13-2, in seven innings for the series victory in Norman, Okla.

It’s the third-straight Big 12 road series win for the Red Raiders (33-12; 12-9) as they outscored the Sooners 28-4 Saturday and Sunday after dropping a tough one in extra innings on Friday. The run-rule win was Tech’s third of the season and its first over OU since 2014. Tech has now won consecutive series in Norman and 8 of its last 10 against the Sooners overall.

Tech added five home runs to its tally to finish with 12 for the weekend. Dating back to its May 4 win over the Sooners in Amarillo, Tech has blasted 16 home runs against the Sooners while outscoring them 50-17.