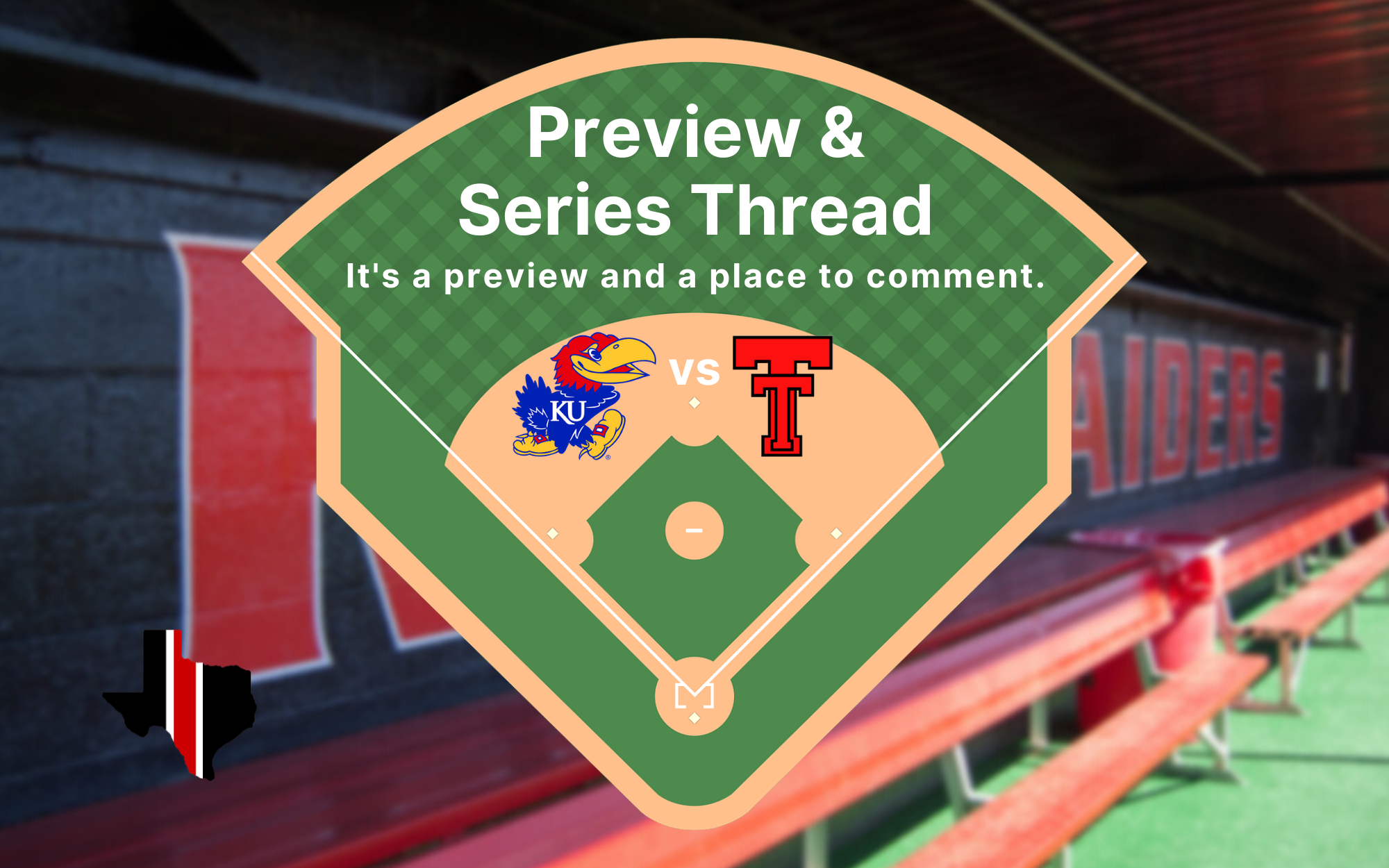 No. 5 Texas Tech baseball returns home for its final series of the regular season this weekend as the Red Raiders host Kansas for a three-game set Thursday-Saturday at Dan Law Field at Rip Griffin Park.

Earlier this week, the two clubs announced a revised series schedule that features a 6:30 p.m. first pitch for Thursday’s opener, a 2 p.m. start time on Friday, and a noon start on Saturday. Each game can be seen on Big 12 Now on ESPN+ and heard on the radio via the Texas Tech Sports Network.

The Red Raiders (32-11; 12-9) are looking for a strong finish to its regular-season resume with an eye on the NCAA postseason. Following last week’s road series win at Oklahoma, Tech enters the weekend solidly in third place in the Big 12 standings with the conference tournament on deck next week.

Kansas (29-24; 7-14) heads to Lubbock with momentum after earning the series win against in the Sunflower Showdown against in-state rival Kansas State. The Jayhawks shutout a potent K-State lineup in a doubleheader on Friday to claim the series. They won the opener, 2-0, and then no-hit the wildcats in a 10-0 run-rule victory.

Thursday’s matchup will mark the 73rd all-time between the two programs. Tech holds a 46-26 lead in the all-time series, including a 25-10 advantage in Lubbock. The Red Raiders have won five straight series against the Jayhawks dating back to 2015 and have been victors in 13 of the last 15 battles overall.

In the last time out, Kansas completed the Border Showdown season sweep with a 9-8 victory over Missouri at Taylor Stadium. Steve Washilewski earned the start before giving way to Ryan Vanderhei, who pitched two scoreless innings of relief and earned his first victory of the season. Jonah Ulane appeared in the eighth inning to close the door and earned his 10th save of the season.

Logan Williams earned the start behind the plate and finished with a walk and a single. Williams caught a MU runner attempting to steal for the final out of the game.

Skyler Messinger and Maui Ahuna both tallied four hits in the win with Ahuna tying his career high with two doubles. Messinger recorded a career-best five RBI, finishing 4-for-5 on the day.

Cole Larsen, Eli Davis and Everhett Hazelwood each are slated to make a start against the Red Raiders. Both Larsen and Davis earned wins over Kansas State in their last appearances with Davis’ pitching only the sixth individual no-hitter in program history. The accomplishment was also the first in Hoglund Ballpark and the first against a Big 12 foe.

Kansas scored five unearned runs in the seventh inning Thursday evening to erase a three-run deficit and hand No. 5 Texas Tech a 7-4 loss in the series opener inside Dan Law Field at Rip Griffin Park.

The Jayhawks (30-24; 8-14) took advantage of a pair of Tech errors in the seventh to score five runs and then added a pair of insurance runs in the ninth to keep the Red Raiders (33-13; 12-10) winless in home series openers during Big 12 play this season. Tech has bounced back to win two of its three conference series thus far at home.

No. 5 Texas Tech capitalized on seven RBI from the bottom of its lineup and six strong innings from Micah Dallas Friday afternoon to even the series with Kansas after a 13-4 victory inside Dan Law Field at Rip Griffin Park.

The Red Raiders, who clinched the No. 3 seed in next week’s Phillips 66 Big 12 Championships with the win, pounced on Kansas (30-25; 8-15) early, scoring each of their 13 runs within the first five innings, essentially erasing a two-spot from the Jayhawks in the top half of the first.

Kansas struggled with its command on the mound throughout the loss, issuing 17 walks to the Red Raiders (34-13; 13-10), which matched the Tech single-game record that was most recently set in 1999 versus Howard. It marked the first Big 12 contest where the Red Raiders drew at least 17 walks in a game as the only other two occurrences came in 1996 against Baylor and in 1995 versus West Texas A&M.

Freshman Chase Hampton carried a no-hitter into the sixth inning Saturday afternoon to help No. 5 Texas Tech shut out Kansas, 5-0, in the regular-series finale inside Dan Law Field at Rip Griffin Park.

The shutout marked the fourth for Tech this season and its first in Big 12 play as the Red Raiders had not previously blanked a conference foe at home since topping Oklahoma by the same score to open their 2016 series. The win clinched the series for the Red Raiders (35-13; 14-10), who now head to Oklahoma City having won their final three series of the regular season.

Hampton (3-0) had only allowed a two-out walk to Tavian Josenberger in the fourth before James Consentino broke up the no-hit effort with a leadoff single to start the sixth. He was erased just two pitches later as Hampton induced a 4-6-3 double play from Conner VanCleave and a liner to finish the inning, marking the longest outing of his still young career.