The Panthers were not very good.

I honestly didn’t know a lot about Florida International before starting this, but, well, they aren’t good at football? At least not last year. Let’s get to it. 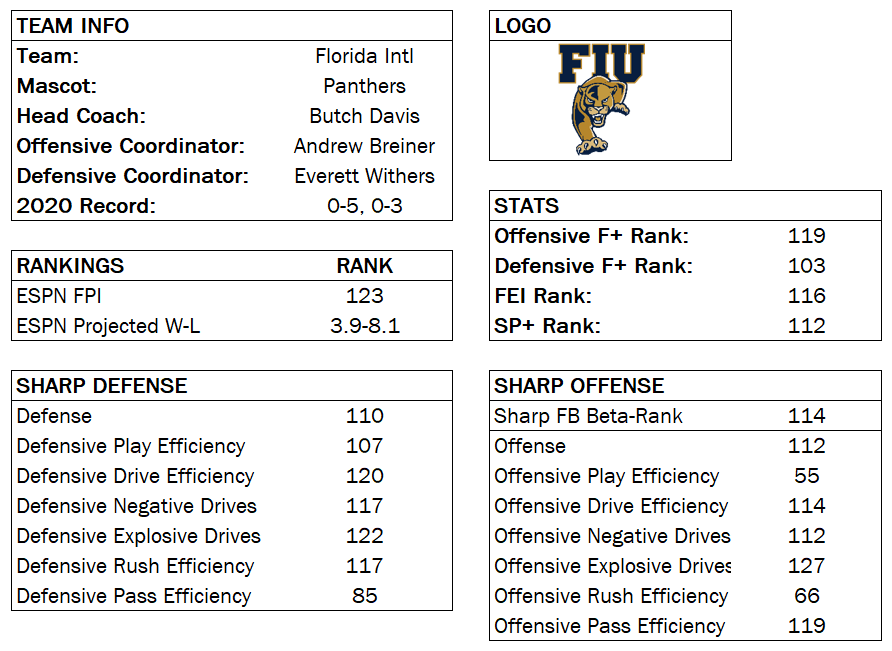 I’d pretty well forgotten that Butch Davis was still coaching and he is actually doing that at Florida International, but he didn’t win a game in the 2020-Covid season. To give some context, in 2019, FIU beat New Hampshire, UMass, Charlotte, UTEP, Old Dominion, and Miami (yes, really), so they are probably capable of winning games, but also in 2019, FIU didn’t win a game on the road, so that’s something.

As you can see, the ESPN FPI ranks don’t think that FIU will be very good, predicting 4 wins at most and the 123rd best team in the nation. The advanced stats also don’t look really very good at all, all are in the 100’s. The Sharp model thinks that they’ll be slightly better, 114th overall, but the offense and defense are both not looking really very great, in the 100’s in nearly every offensive category except for how the Panthers run the ball and on the defensive side of the ball, they might defend the pass reasonably well. 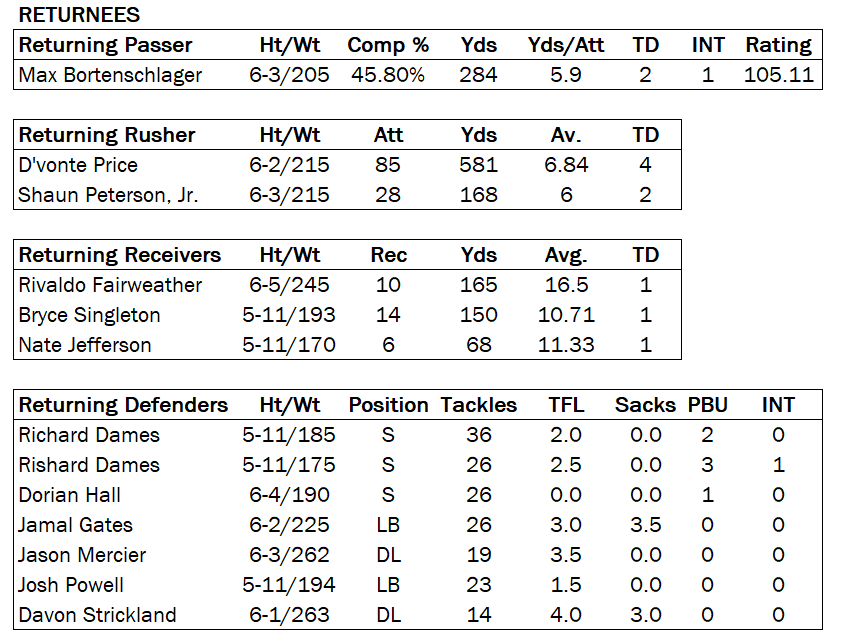 Getting a handle on returnees, especially with super seniors, but I believe that Bortenschlager is the returning passer, but that’s not exactly saying a ton, not a high completion rate and not a high yards per pass rate, so my thought is that FIU could look elsewhere, but there’s also probably a reason why he returned. Price appears to be “the guy” at running back and both Price and Peterson are big running backs, which should be interesting.

Fairweather is a tight end and at the very least, he is productive when he catches the ball and could be a significant threat. The other two receivers just didn’t get a ton of catches and my guess is that this is partly because the quarterback doesn’t have the biggest arm.

Defensively, it appears that the safeties all got a ton of run and teams were passing on FIU quite a bit. Gates appears to be the most disruptive defender and I’d also guess that Strickland is probably the defensive end that will rush the quarterback.

It seems as if everyone was in the market for a ton of transfers, but according to the 24/7 Sports transfer tracker, that wasn’t the case for FIU. Passmore is probably the best player on that list, but he really didn’t have a ton of stats.