A quick little caveat. I can’t say for certain who is on scholarship and who is not. This is a best guess on my part rather than anything definitive. 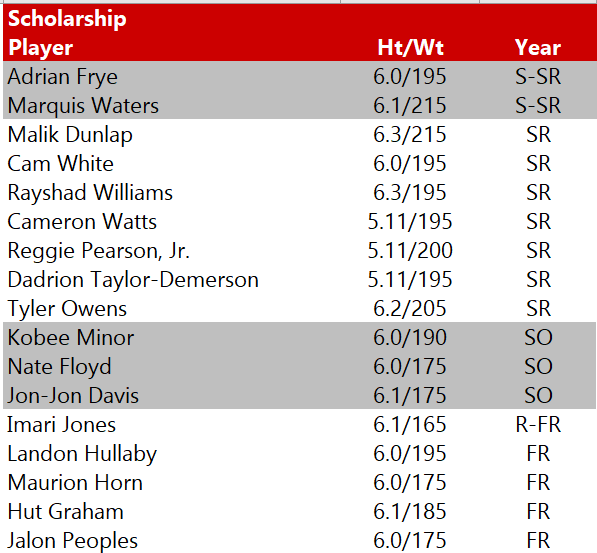 There are two super-seniors, Adrian Frye and Marquis Waters and you could probably pencil these two in as starters. I should also hope that Waters is fully healthy by the time the season starts. After these two, my guess is that Tim DeRuyter is probably going with a 5-man backfield and my guess would be that Rayshad Williams, Reggie Pearson, and Dadrion Taylor-Demerson are most likely your other starters with Tyler Owens getting a lot of playing time along with Malik Dunlap. I’ll also be really interested if this staff keeps Dunalp at cornerback or decides to move him to safety.

The problem at defensive back is that there are no, yes no, juniors and that’s sort of a problem and maybe indicative of what the Matt Wells era represented. He was going to HAVE to get older at defensive back and would likely be somewhat forced to pull in some transfers to help bridge the gap. Minor, Floyd, and Davis have never really played because they’ve had older guys in front of them.

The freshmen are obviously unproven, but Landon Hullaby was likely the top recruit of the 2022 class, then followed by Maurion Horn and Jalon Peoples. I’d say that it’s close regardless and trying to get a ton of snaps with that group of seniors is going to be tough. Graham played a lot of offense and so his transition may take some time, but who knows.

I can’t say I now a ton about these players. Whitfield and Jaramillo have been around for a while, and I remember Collins from Lovejoy, while Morris is the son of the former Red Raider footballer. Ortiz is also a redshirt freshman and I’m running out of time and don’t have time to correct that. Apologies. 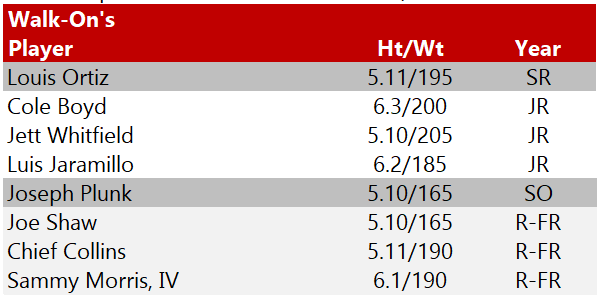