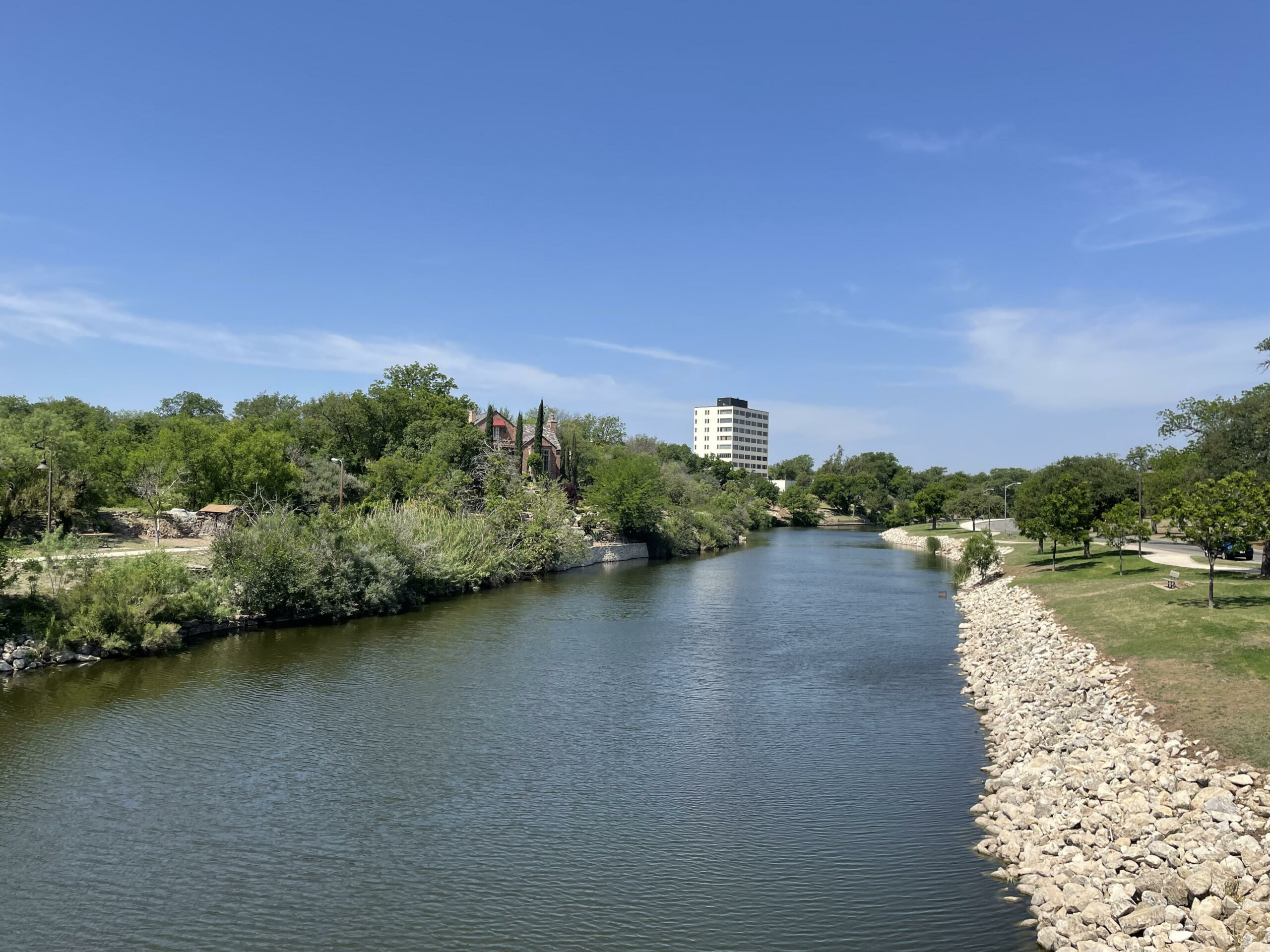 It’s been too long since I published anything on Staking the Plains. Between starting a podcast last summer, moving houses in October, and the birth of my daughter in March, it’s a hobby that I haven’t made enough time for like I should. So I’m hopping back up on the horse for a bit of a tribute to a fellow city in West Texas.

My wife and I are at the point as new parents that we’re both back at work and more or less in a typical routine. “Typical routine” plus whatever our two month old throws at us. This summer, we’ll both be traveling for work, family, and vacation, hopefully culminating in a trip to Raleigh for one of Texas Tech’s biggest non-conference games in recent memory. The North Carolina State Wolfpack are expected to be Top 15 in preseason polls; a win would begin the McGuire era with a serious bang.

Ahead of our summer travel, we thought it would be a good idea to take a practice run with our daughter. Go somewhere relatively close by with no agenda, no one to see. That way if the baby decides she isn’t ready for traveling just yet, it won’t feel like we’re missing out on anything.

We picked San Angelo. I had been for work several times but never had the chance to explore the town, and my wife had never been. Three hours from Lubbock was a reasonably quick drive, and we could stop in Big Spring for reinforcements if needed.  We found a list of “things to do” in San Angelo – most seemingly kid friendly, casual activities that we could try out.

I love all of West Texas. But I can admit most of it isn’t typically seen as a tourist destination for many. We found San Angelo to be a surprisingly refreshing oasis among the vast plains of our region.

Friday night we left Lubbock right at 5, and our daughter slept until the very last stop light before reaching our bed and breakfast in San Angelo. We couldn’t have drawn it up any better. It was a relief and proud moment for us as new parents.

We settled into a room at “The Inn at the Chicken Farm Art Center”. From what we learned, it’s a three acre compound with several artists who reside and operate art studios on site. Some of the studios used to be chicken coops, hence the name. There are three rooms you can stay in on the compound, and we were assigned the French Country Room. It was like stepping into your grandmother’s old house from the time machine; we loved it. The art all over the grounds at the Chicken Farm made it an extremely unique spot. 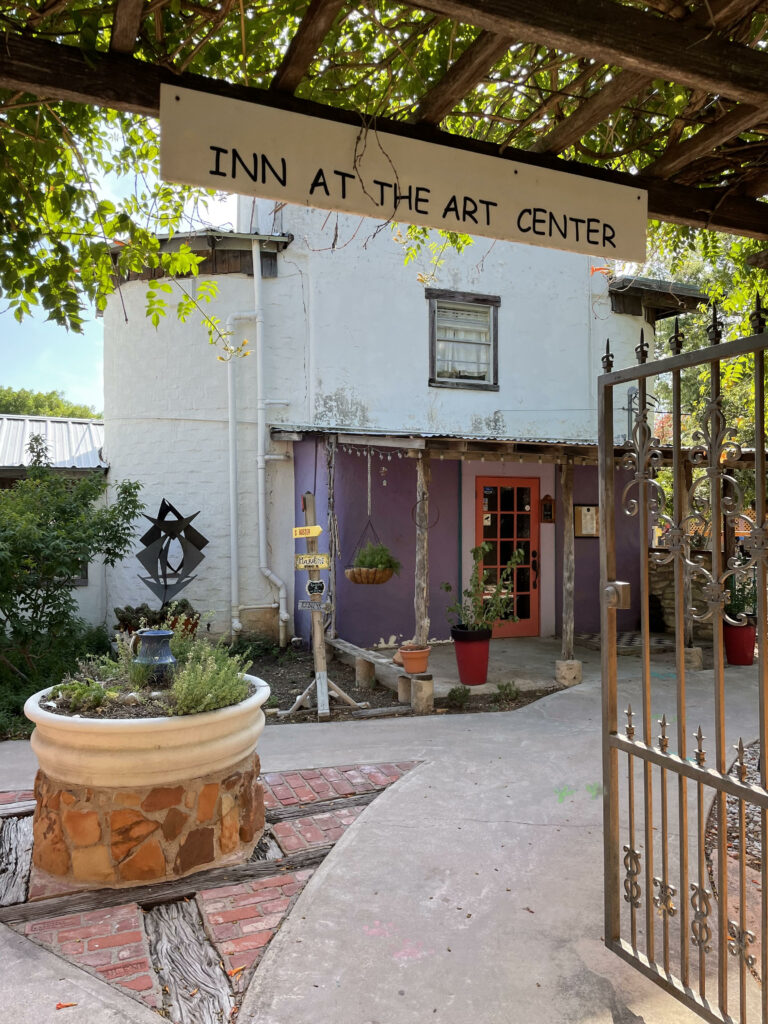 The Inn at the Art Center

I wish I could take credit for picking the perfect place to stay, but the reality is we planned it all on a whim. There were only three or four Airbnb options in all of San Angelo, and the generic hotels were more expensive than the Chicken Farm. We lucked into a stay at a special place.

Friday night of our West Texas vacation consisted of me making a sandwich run while my wife got our little one down for bed. Muted, I watched Texas Tech come up short in extra innings vs. K-State. Based on the NCAA selection committee draw, I’m not sure a win would’ve helped the Red Raiders’ seeding very much.

The next morning, we went for a long walk along the Concho River. It was an impressive place; well taken care of, clean, with tons of public art, business, and civic organizations lining the banks of the river. Yet again, our daughter was a champ and either slept through the walk or entertained herself while awake in the stroller (which usually just consists of chewing on her fingers). 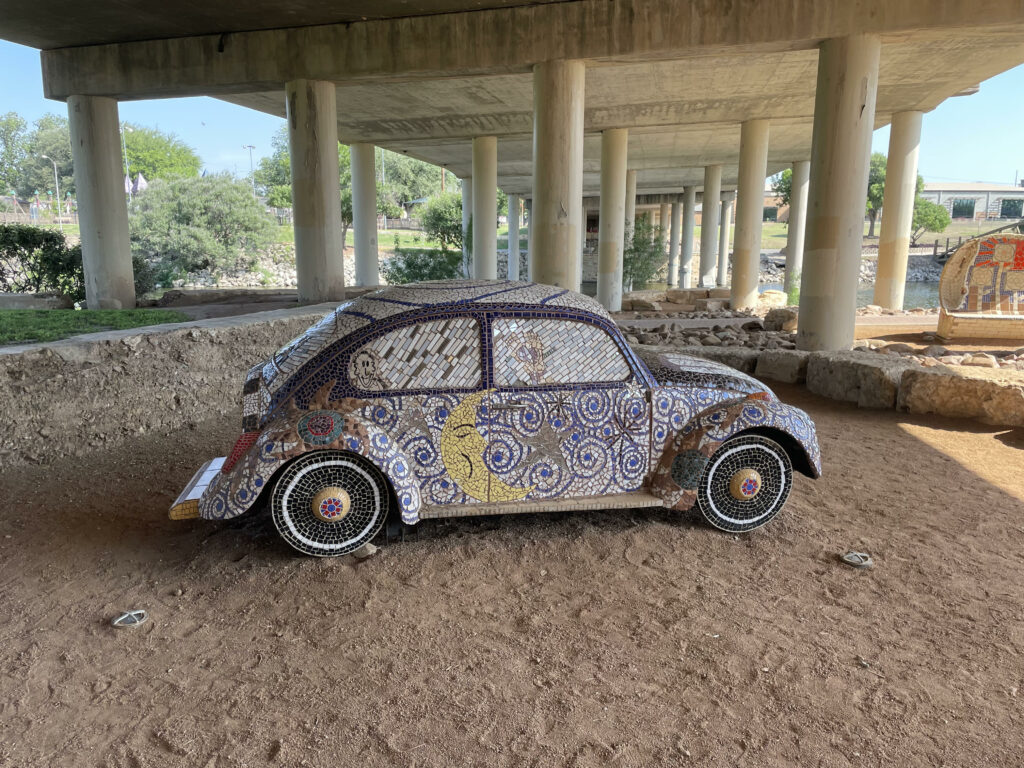 An old Volkswagen along the Concho River Walk. 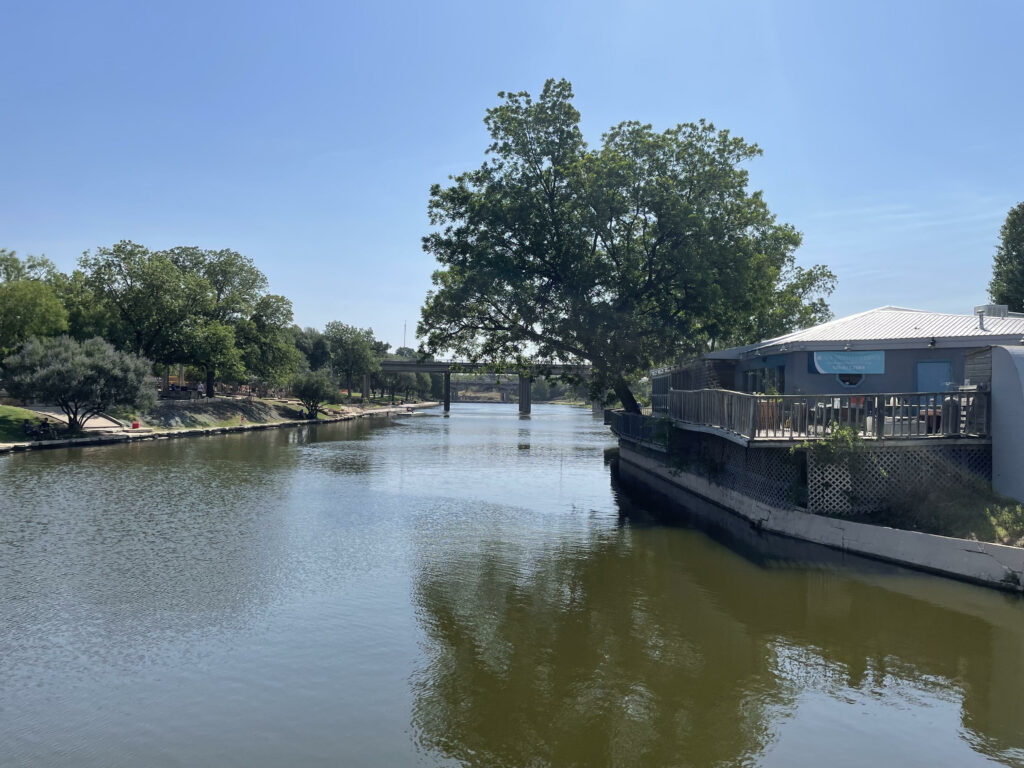 View from one of the many crossings along the Concho River, with a clubhouse to the right. 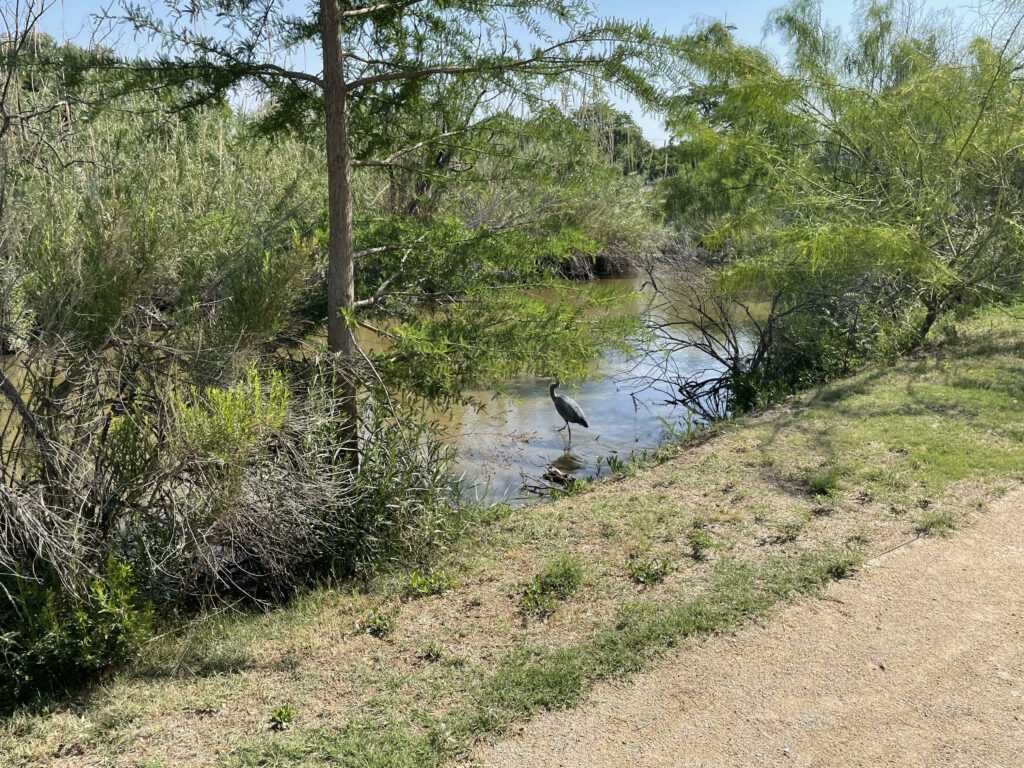 Wildlife along the Concho River Walk. 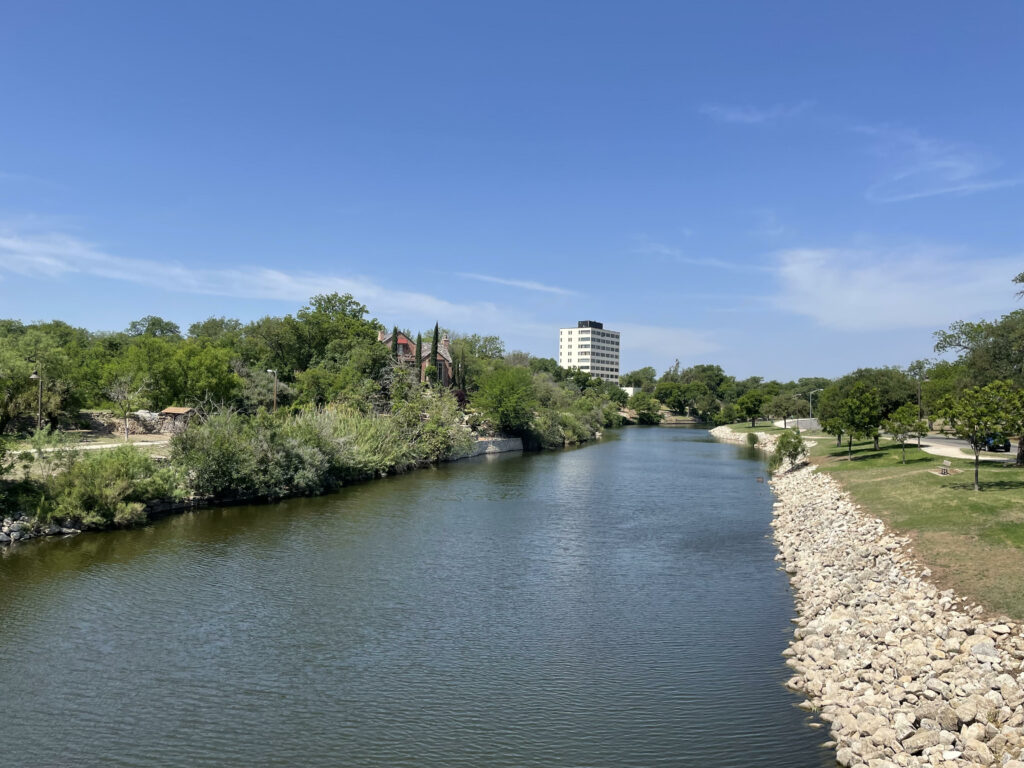 Another view of the Concho River, plus the house of my dreams along the left bank.

We went back to the Chicken Farm for a break, as the temperature was climbing pretty quickly. I got us some BBQ while my wife put our daughter down for another nap, which we enjoyed out on a large patio. The bed and breakfast was well stocked with free beer. Free beer is especially delicious with some barbecue when it’s 100 degrees outside and you’re surrounded by cool artwork.

The first half of Saturday felt like a huge exhale from the craziness of our lives the past few months, and a joint sigh of relief that our daughter was doing so well away from home for the first time. 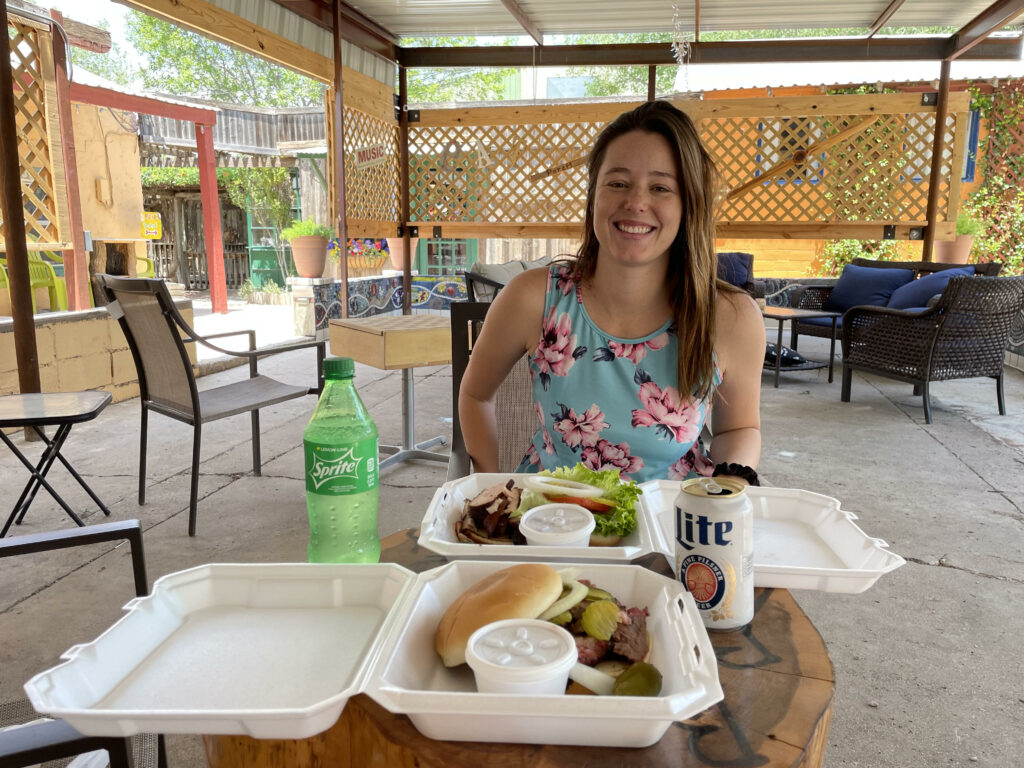 Lunch with a view.

As hot as it was, we tried to stay indoors for the afternoon. We went to San Angelo’s art museum. It wasn’t exactly my cup of tea, but it was air conditioned and free of charge, so I’ll count it as a win. Downtown San Angelo had a few general stores and antique stores that provided some fun window shopping. We also stumbled upon a bookstore with tons of literature about the history of West Texas. With several books on individual counties across West Texas, I highly recommend you pop in if you’re from the region and want to read more about the town or county your family is from. They had large, detailed county maps as well (no Lubbock County, unfortunately). 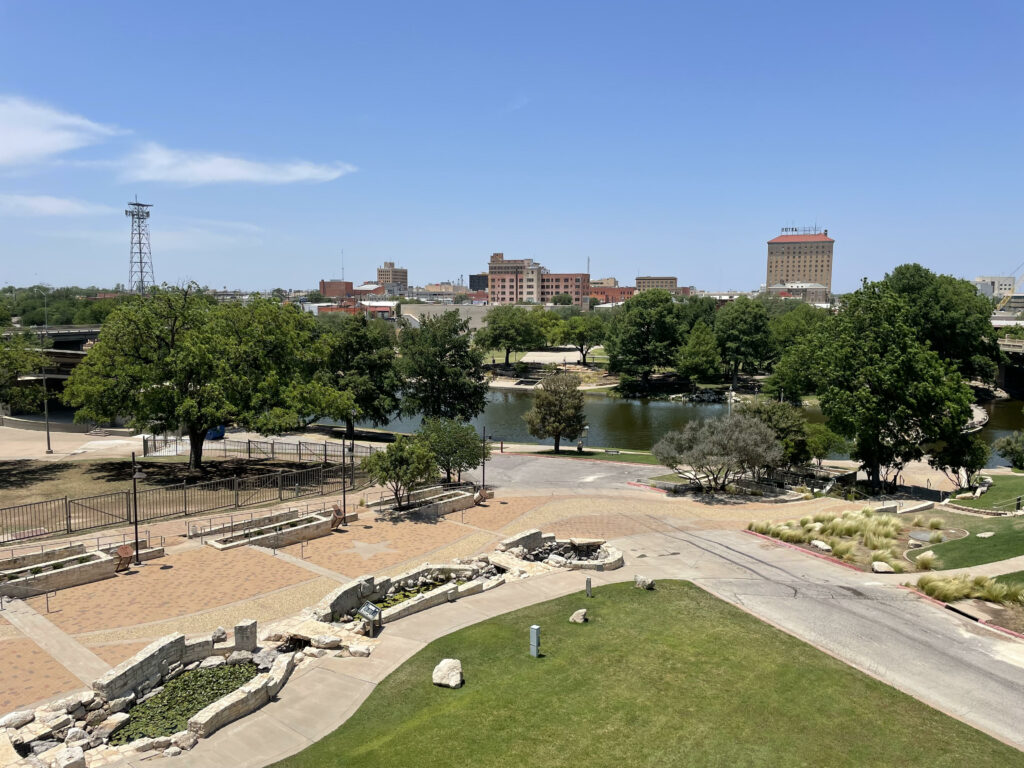 View of the Concho River and downtown San Angelo from the San Angelo Museum of Fine Arts. 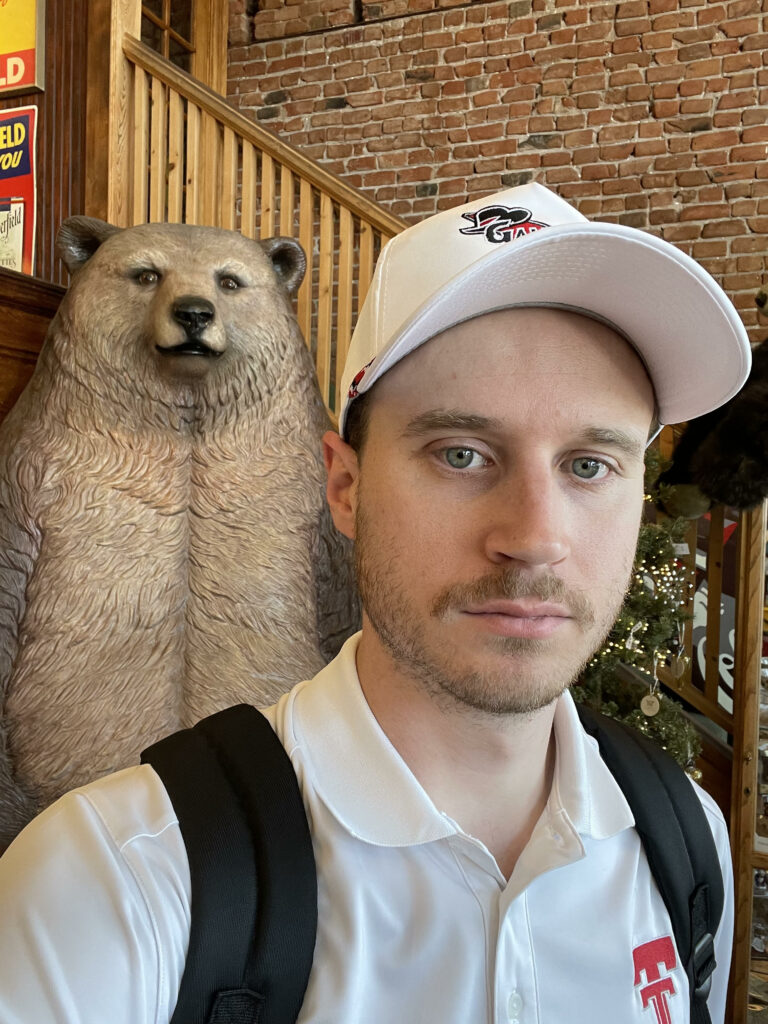 Eggemeyer’s General Store in downtown San Angelo. Some of my dad jokes have gotten so bad, I can hardly bear it. 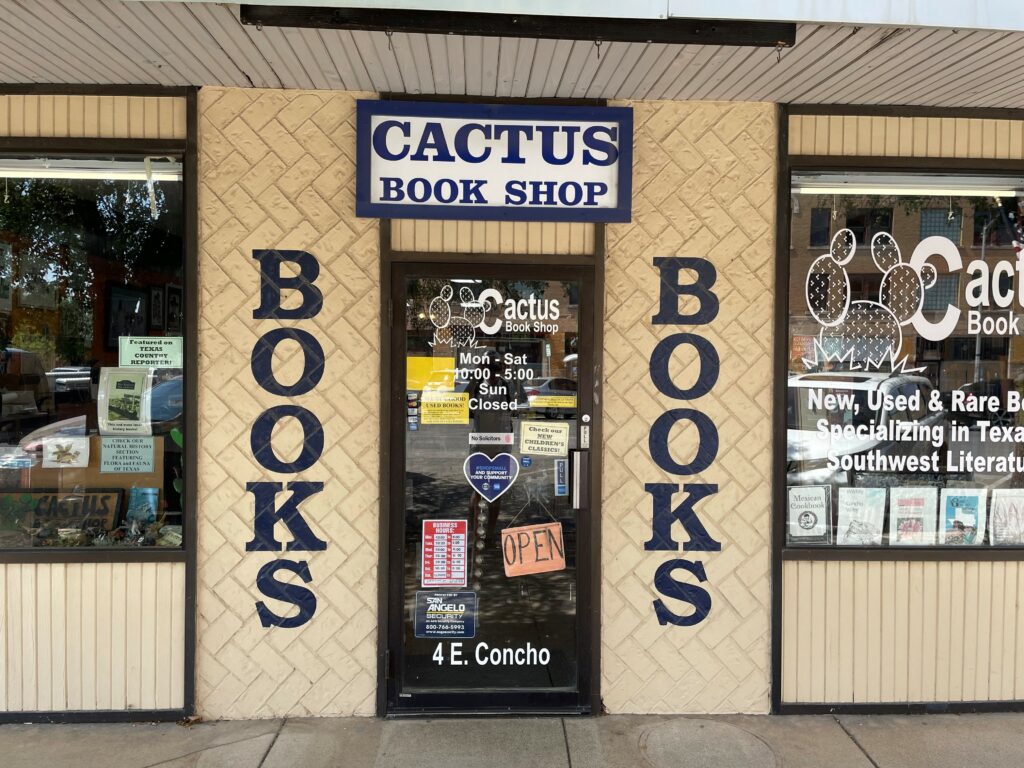 Then it was back to the Chicken Farm for another free beer and a walk around the compound to check out some of the studios. There’s a restaurant on the grounds of the Chicken Farm that was open for dinner, and that was an easy choice for us rather than loading up the car seat again. A bit overpriced for the quality, but still enjoyable. My wife had the pinot noir braised beef short rib, I went with the Texas bourbon charred tenderloin. The pomegranate duck breast was a close runner up. 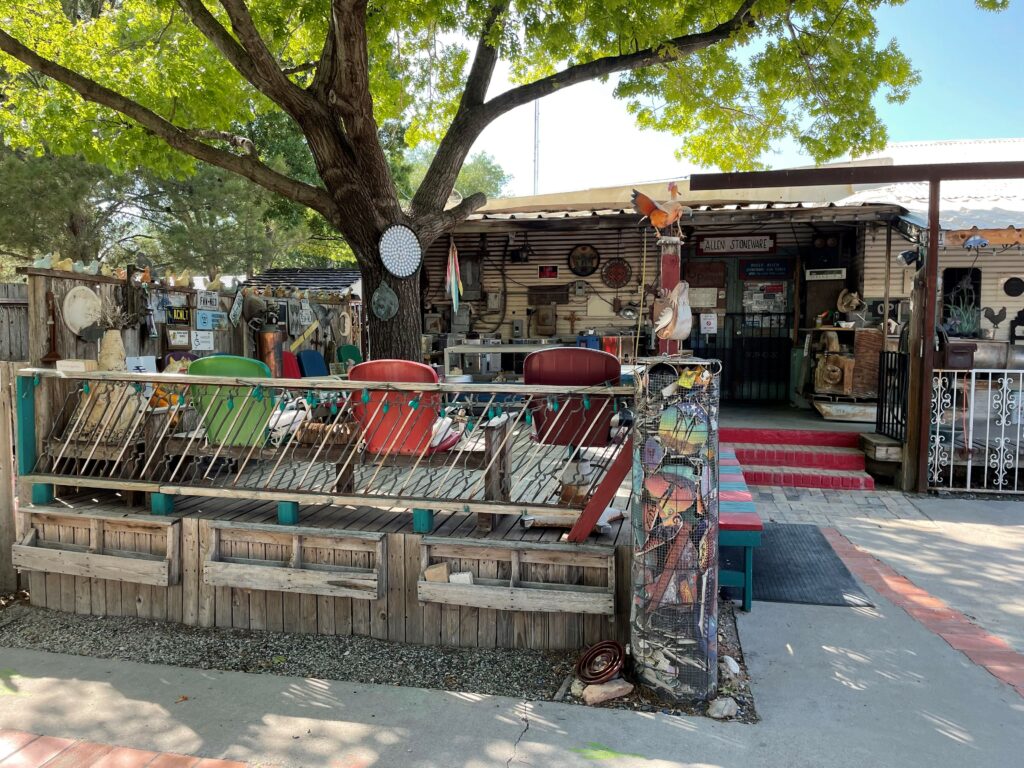 Another nap out of the way and the temperature cooled down as the sun started setting. We went back out to explore the International Waterlily Collection, which seemed random but was yet another activity we couldn’t do at home in Lubbock. And it was also free of charge. 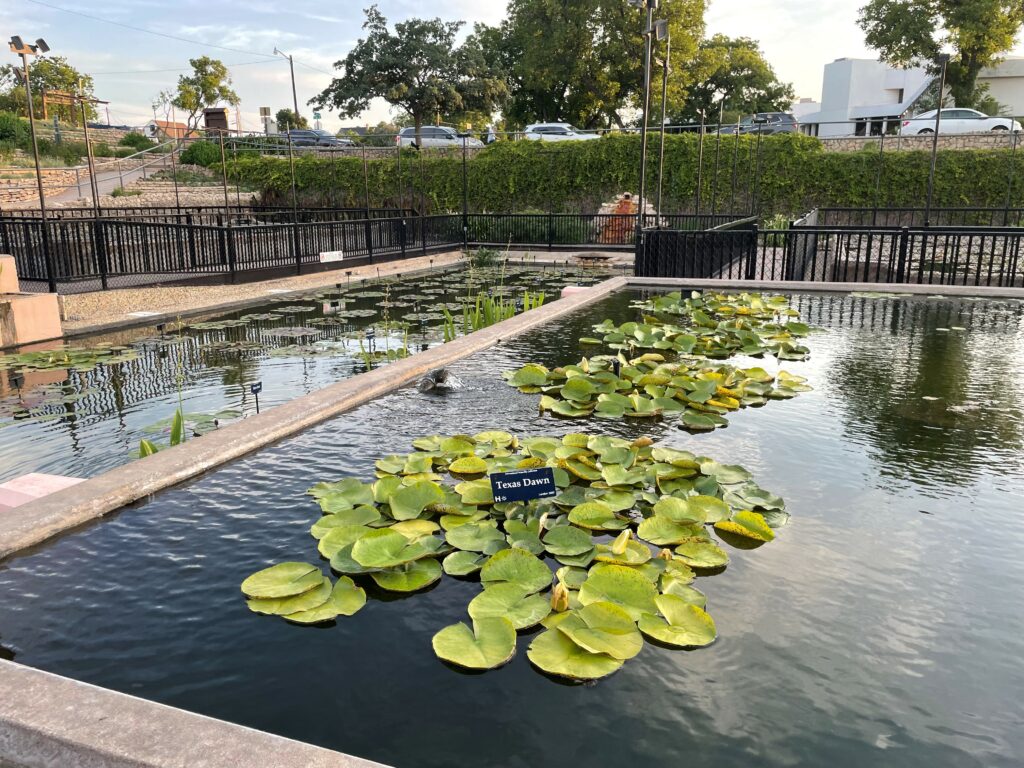 Sunday morning was uneventful. We slept in, checked out, grabbed brunch, drove around the campus at Angelo State University, then came back to Lubbock. Once again, my two month old daughter slept the whole way until about the final 10 minutes of the drive.

We weren’t sure what to expect from the city of San Angelo nor what traveling with our daughter for the first time would be like. Maybe West Texas was good preparation for fatherhood; both experiences can be a surprise, creating memories that exceed all of your hopes and expectations.