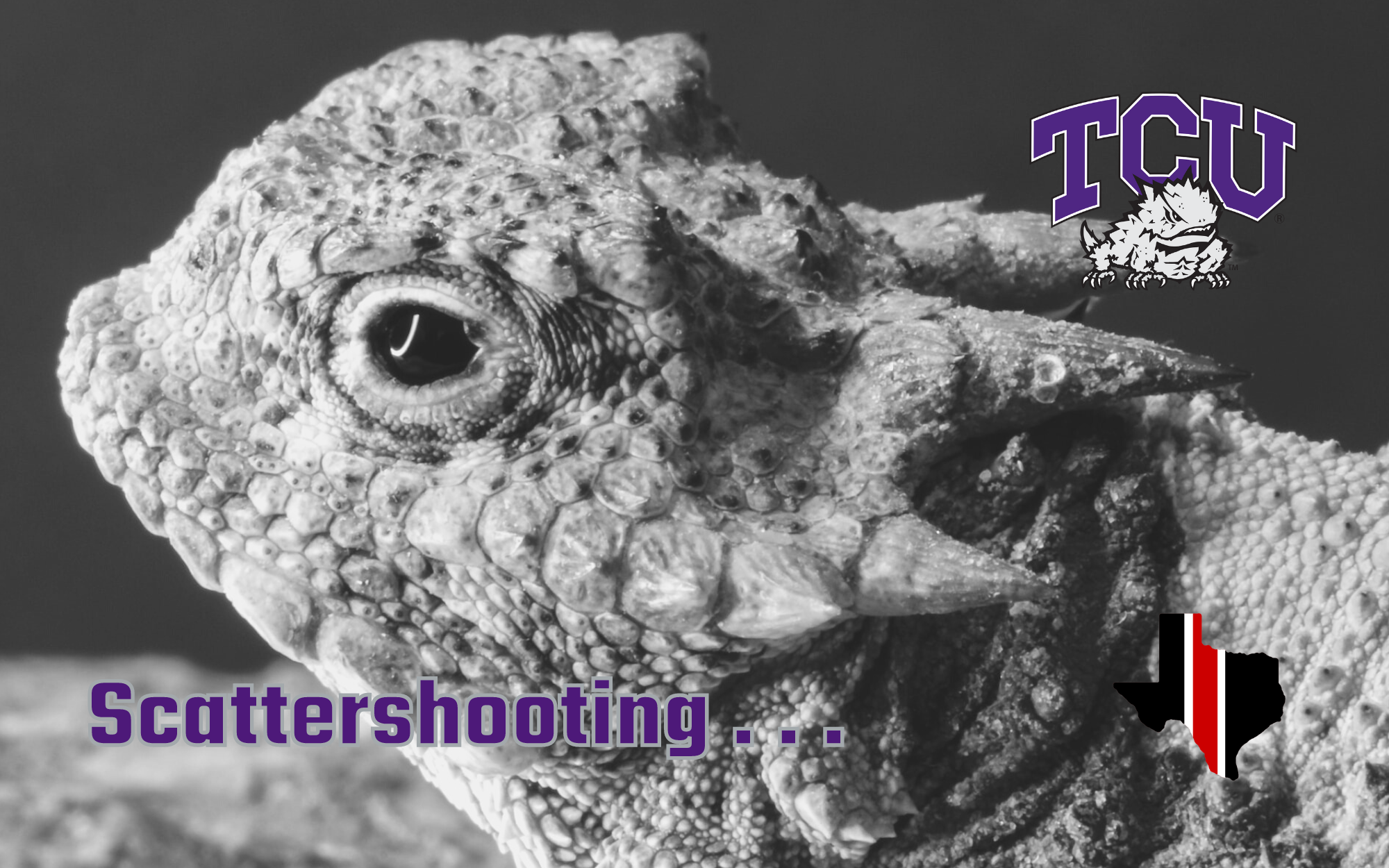 Don’t even know if that’s a horned frog.

Bob Lilly was born in Olney, but did most of his formative years in Throckmorton due to the drought in the 1950s. Lilly graduated from high school in Oregon because of family jobs for his parents. Lilly accepted a scholarship at TCU where he would end up being an All-American as a senior. Lilly was drafted in the first round, pick 13, by the Dallas Cowboys in 1961.

Lilly starred at defensive tackle where he was maybe the best defensive tackle in the NFL. Ever. Lilly was a 7-time All-Pro and made the All-Decade team in the 1960s and 1970s. I did not know that when Lilly retired he ran a beer distributing center in Waco, but he saw the impact of drunken drivers he sold out and opened up a landscape photography shop in Las Cruces, New Mexico.

Lilly moved back to Texas, to Graham where he still resides and is 83.

TCU Things. The thing I have a difficult time understanding is how Gary Patterson lost basically everyone at TCU and in walks Sonny Dykes into a program that was probably in as good of position as any in the Big 12 in terms of a rebuild or reload. I get that his personality was maybe grating and I think you have fans that are appreciative of what Patterson did, but there doesn’t seem to be a lot of people who are upset that he’s gone. With Texas Tech and Leach, it was pretty clear that the personalities were at odds, but you just don’t hear the rumors or discussions (or maybe I’m not reading the right things) about Patterson’s demise. I mean he has a statue in front of the stadium . . . OddsShark says that Texas Tech opened as 7.5 point underdogs and now that line is 10.0 . . .

Up & Down in the Big 12. TCU continues their undefeated season, beating West Virginia in Morgantown, 41-31. Now the Frogs return home to take on Texas Tech and I’m not feeling great about this. WVU kept things relatively close, but TCU poured it on late . . . the score that surprised everyone was Kansas State 48, Oklahoma State 0. The Cowboys were shut-out and a combination of Deuce Vaughn and Will Howard gave OSU everything they could handle. Never saw that score coming . . . Oklahoma handled business in Ames, 27-13. Iowa State still has issues putting the ball in the endzone and OU did more than enough, but their offense still has issues . . .

The Big 12 finally is back to a full slate of games, leading off with Baylor in Norman to take on Oklahoma, the Sooners favored by 3.0 . . . Oklahoma State is in Lawrence to face Kansas. I honestly don’t know what to expect from OSU as I thought the Cowboys were on track to get TCU in the championship game . . . West Virginia and Iowa State are in Ames, two teams with 1 Big 12 win between them . . . Texas is coming off a bye and playing maybe the 2nd best team in the Big 12, Kansas State in Manhattan, with the Longhorns favored by 1.0. I think would take the Wildcats . . .

Internet Things. I don’t know how anyone can even know this, but a 5-year old bar-tailed godwit (didn’t know that a godwit was a word or a bird) broke the world record for nonstop flight, 8,426 miles total, flying from Alaska to Tasmania without rest . . . this is the face of an ant . . .

Image from a horror movie? Nope. That’s the very real face of an ant.
An ant.
Now you have to think about that all night. pic.twitter.com/HOWLTlnfJ1

Other Observations. It’s Halloween, but I’m already pretty Halloweened out. On Friday, my wife’s school district opens up the junior high and the teachers hand out candy (that want to participate) after school and any teacher or employee in the district can go trick or treating inside the halls of the junior high. It’s great for little kids and and you end up seeing a ton of people that you normally don’t see and it’s not just teacher kids, but janitors, cafeteria workers, etc. On Saturday night, our neighborhood does a hayride where trucks and trailers with hay move along like a train to top at driveways to get candy. Also good for kids because there’s no traffic and myself and the boys didn’t ride on the hayride, I rode my bicycle and they rode a hoverboard and electric skateboard to make it a bit easier for us to get around. It’s not the actual day of Halloween and we’re pretty well out of candy since we’ve given candy twice so I don’t know if we turn off the lights and be one of “those people” or maybe put up a sign that says we don’t have any candy? I’m not sure what we’ll do..