First things first, this is sort of a recruiting roundup that goes a bit deeper into numbers and less deep into the actual players, mainly because I was curious about things. I do want to get to the sources, so I’m linking them here: Rivals; On3; 24/7 Sports; and ESPN. I’m also quoting the portion from ESPN, which is usually behind a paywall:

22. Texas Tech Red Raiders
ESPN 300 commits: 4 | Previous ranking: 22
Big 12 rank: 4 of 10
Top offensive commit: QB Jake Strong (four stars)
Top defensive commit: DE Dylan Spencer (No. 168)
New coach Joey McGuire has been known as a strong recruiter and brings a high-energy style to the Red Raiders. Now with a full cycle to work, this is a team to watch in recruiting. He struck big prior to signing day in his home state of Texas with explosive DE Spencer, who can really rush the passer. The foundation of the class is built on in-state talent, including quarterback Strong, a passer who has continued to improve throughout his high school career and has good arm strength and accuracy. To help protect Strong, the Red Raiders added several high-three-star OLs to develop in Daniel Sill, Dylan Shaw and Kaden Carr. Safety Brenden Jordan can be a sound tackler in the secondary, and edge defender Isaiah Crawford is a lengthy prospect with nice upside.

The point of this post for me was really the part where it listed the number of top players. I think we can safely say that as long as Joey McGuire is here, we’re not going to have to contort ourselves into the quality of a recruiting class. I’ve done that plenty, the idea that finishing 7th is just marginally worse than 4th and Coach X has said that player development is key.

With McGuire, he’s also said that player development is key, but he’s going to go out and get the best and most talented players possible. It’s not one or the other, it’s both. Thus, I wanted to take a look at how Texas Tech finished in the 3 major sites where it is easy to determine where a team finished in-conference. 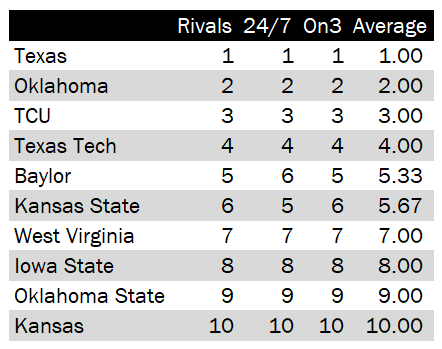 The chalk was pretty much the same with a little flip-flopping with Baylor and Kansas State.

Then I took the finish overall in the country, just not conference specific AND also included the new Big 12 (because why not). 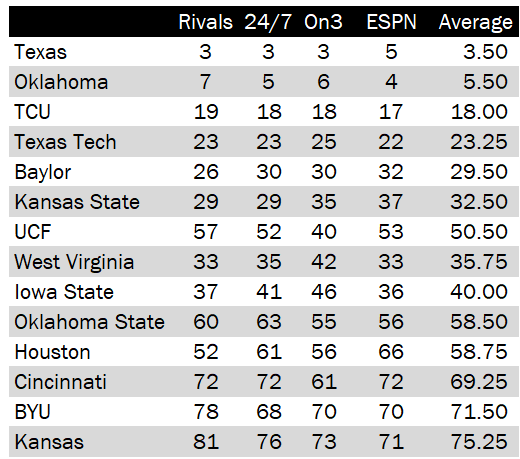 It appears to be very little discrepancy at the top. Most sites had UT finishing inside the top 5, while Oklahoma finished right outside, except for ESPN. TCU finished in that later teens portion and we’ll get to more on that in a minute. Texas Tech was obviously pretty consistent. The problem here is that the rest of the Big 12 isn’t really finishing all that well other than Baylor and Kansas State. To not really be in the top 30 isn’t really that great and I know that teams like Iowa State and Oklahoma State really do develop players, but teams are going to have to recruit better when Texas and Oklahoma leave. And I know that UT in particular does a terrible job of developing talent, but that won’t last forever.

Regardless, this is less about them and more about the rest of the Big 12.

This is a bit difficult to read, but I think being able to take this information in one chart is nice and we can dig into some details. 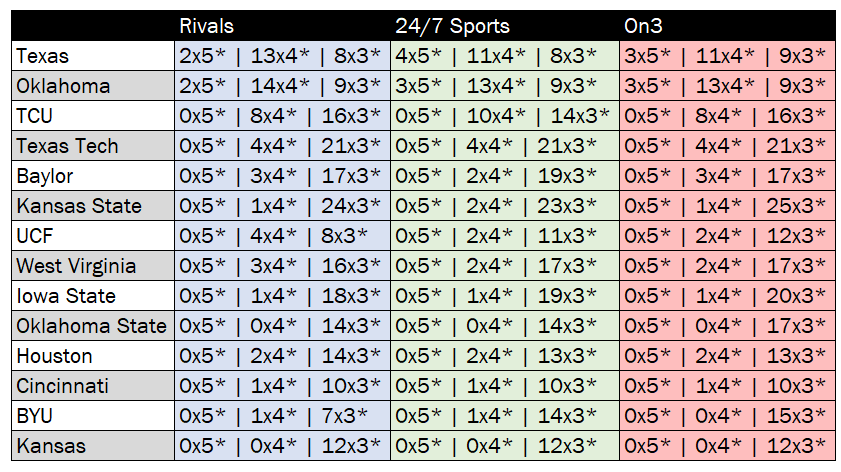 Now, if you want to do some contorting, then keep reading, otherwise feel free to stop here.

I only had time to do this with Texas Tech’s class, but with Texas Tech’s class, the 3-stars that make up 21 of the players, at least according to On3 are all better than an 85, so every single one of them is on the high-end of the spectrum rather than a player in the low 80’s. In fact, there were 4 players with On3 that were a single point away from being a 4-star player, and all of the 21 players were 86 or better. That’s pretty good and we’re not having to do a bunch of convincing to believe that the remainder of the Texas Tech 2023 recruiting class is closer to being a group of 4-star players than I can ever recall. And I’m sure that Baylor and Kansas Sate both have high-end 4-star players as well, or at least I would think so, but this is sort of new territory for Texas Tech. Texas Tech’s average was 88.388 for On3 and 87.77 for 24/7 Sports. And I don’t think that all of the 4-star players for Texas Tech were the same,

If you want to crane your neck a bit further. Texas Tech finished with 5 4-star players according to ESPN: Dylan Spencer, Brenden Jordan, Jordan Sanford, Isaiah Crawford, and Jake Strong. While On3 had Sanford, Daniel Sill, Spencer, and Ansel Nedore were the 4-stars. For 24/7 Sports it was Crawford, Jordan, Sanford, Anquan Willis, and Nick Fattig. Rivals had Crawford, Sanford, Spencer, Tyrone West, and Jmaury Davis. Thus, technically speaking, that’s 11 4-star players in the 2023 recruiting class for Texas Tech (I totally realize that this can be done between every team, I just don’t have time.

4-Stars Between All Services:

If you’d like to read more, On3 had additional thoughts on Texas Tech’s class:

4. Texas Tech (88.388)
0 five-stars | 4 four-stars | 23 three-stars | 27 total recruits
Top Commit: Post (Texas) EDGE Isaiah Crawford, No. 211 in On3 Consensus
Summary: Give Joey McGuire credit for what he has done with this Texas Tech program. He has helped turn around the Red Raiders and bring momentum on and off the field to Lubbock. He has emphasized in-state recruit and delivered this year with a class ranked 18 spots better than 2022.

If you had the ability build what the perfect wide receiver looks like, you’d probably come close to the receiver from Humble.

6-foot-2, 188 pounds, great hands, and can absolutely fly. West’s 100 meter time of 10.74 has him 7th among incoming recruits in the Big 12, and his 200 meter time of 21.39 ranks him 4th. This is an absolutely elite prospect who has his best football in front of him playing in Zach Kittley’s receiver-friendly offense.

In previous years, this is not a commitment the Red Raiders win against teams like Oklahoma State and TCU. Then you add into the mix late pushes by both Michigan and Washington, and the coaches pulled off quite the win here.

On the field, Sanford is an excellent combination of elite speed and talent at defensive back. In a league like the Big 12, you absolutely need a cover corner and someone who can limit what opposing offenses can do against your defense.