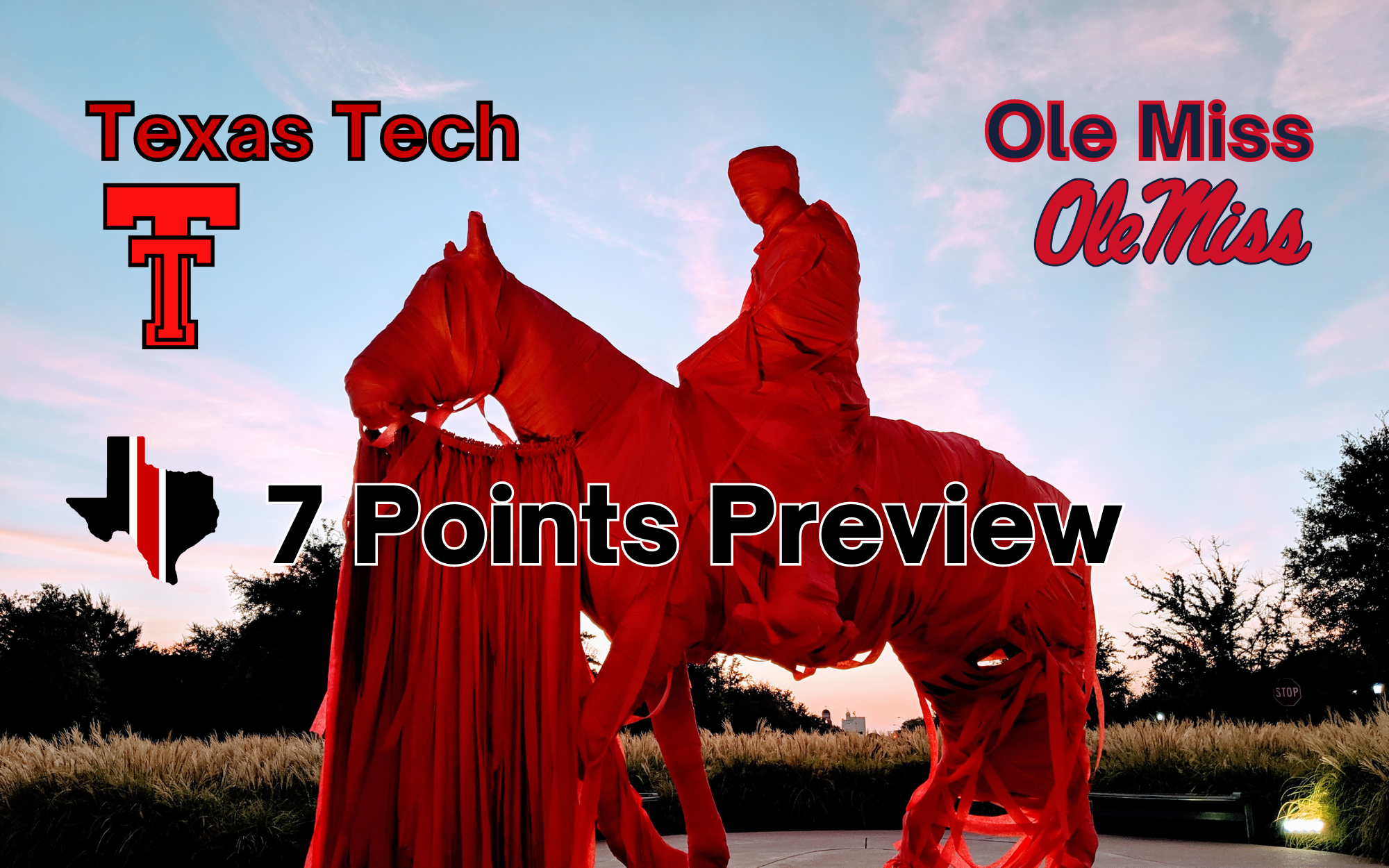 Last one of the year!

Advanced Stats: Sharp Football, we meet one last time with stats that are slightly better than what the rest of the country thinks regarding these two teams. 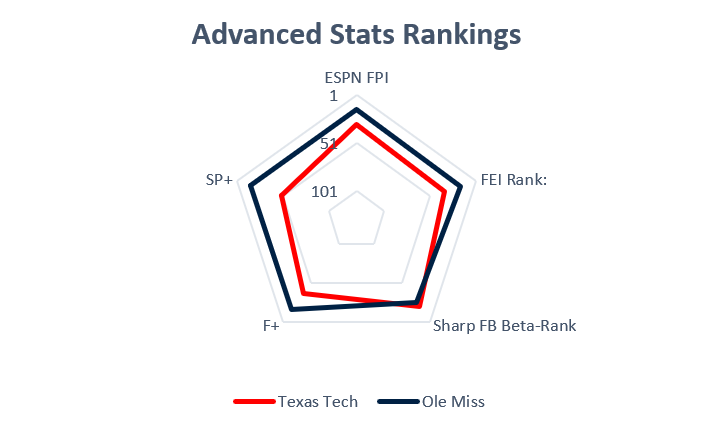 Texas Tech Offense vs. Ole Miss Defense: This is one of those times where maybe the stats of the Texas Tech don’t necessarily demonstrate where it is right now. With Tyler Shough sort of coming into his own the last few weeks, it’s a bit different. Passing is still a strength and having highly efficient drives seem like a hallmark and it also seems like things that the Ole Miss defense isn’t good at, which is a positive for Texas Tech. 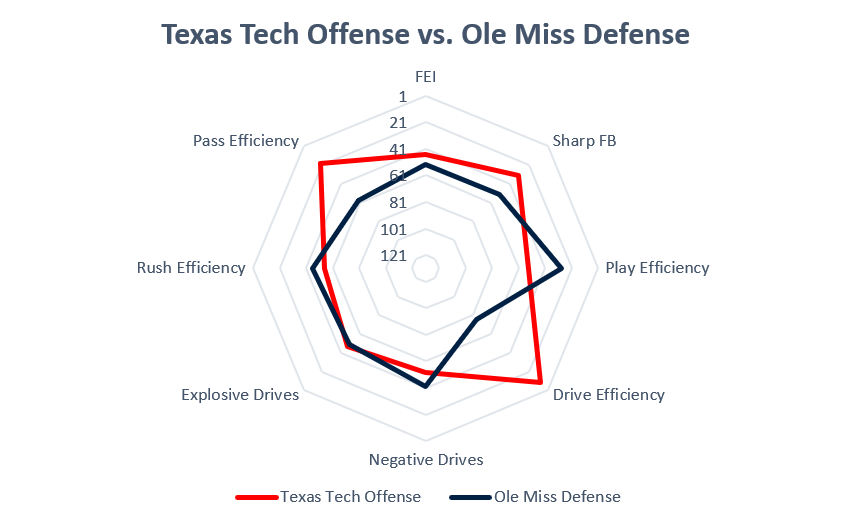 Texas Tech Defense vs. Ole Miss Offense: So, the Ole Miss offense is pretty great! The thing that bothers me is that they are one of the best rushing teams in the nation AND also incredibly explosive AND they hardly have any negative drives. That seems unfair. I think I heard Lane Kiffin say that the running game is really a pro-style running game with some Baylor passing concepts. Lane basically borrowed (stole) from Kendall Briles when he was the OC there. 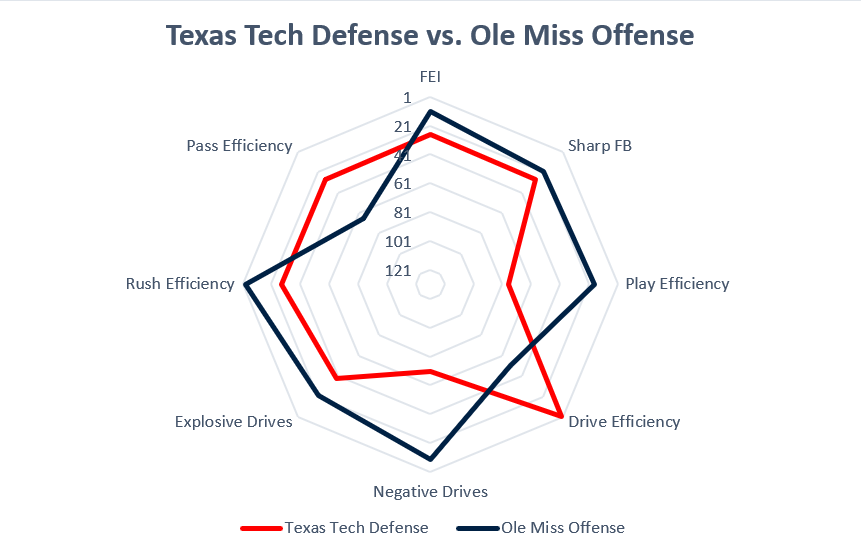 QB #2 Jaxson Dart (SO | 6-2/220): Dart is the former USC signal caller who arrived in Oxford. Dart completes 63% of his passes for about 218 yards a game, about 8.1 yards per attempt, with 18 touchdowns and 8 picks. Dart averages about 10 carries a game, so he’s going to run the ball and nearly 5 yards a carry. Those interceptions aren’t something happening in a bundle, at most he has 2 and that was against Vanderbilt back in October. He’s pretty darn careful.

Key #1: Rushing Offense Makes the Total Offense Great: One of Mississippi’s best advantages is that they are running the damn hell out of the ball, 3rd in the nation in rushing offense with 262 yards a game, which has allowed the Rebs to be 9th overall in total offense at 491 yards a game. We’ve gotten to the running back above, but the other key is that Ole Miss is 126th in time of possession, which means that despite the fact that they are running the ball, they are absolutely scoring quickly and efficiently.

Key #2: When You Run You Convert: Ole Miss is 12th in the nation in 3rd down conversions and they only have 14.5 conversion opportunities per game, while converting 48% of those opportunities. Compared to Texas Tech, where the offense has 16 attempts and only converts 37% and is 94th in the nation. My guess is that Ole Miss is rarely in a bad yardage situation because they’re running the ball so much and as a result, they have a lot of 3rd and shorts rather than third and 5+ yards.

Key #3: Defense Is Susceptible: The defense is okay, but not great. The advanced stats sort of show the same thing, but statistically, the defense is 68th in the nation in total yards allowed and 82nd in passing efficiency defense, which bodes well for Texas Tech. Additionally, the defense isn’t necessarily stopping teams on 3rd downs, 70th in the nation overall, and 121st in red zone defense. Get the ball in the red zone and good things will likely happen.

How do you eulogize Mike Leach?

How do you eulogize someone that’s not supposed to be gone? Like a lot of you, I wasn’t prepared for the news when Mike Leach passed away.

And that was Leach. He persisted. His offense was that of persistence, the same thing over and over again because a person that can do a thing perfectly will likely be better than the person who cannot. And it was that persistence that created the Air Raid. It created accurate quarterbacks. It created receivers who always caught the ball.

And all of this doesn’t even include the human impact he made along the way. That’s significant and a way that I can’t really comprehend because I that’s the human aspect and the connections he had with his wife, his kids, and grandkids that we’ll never know about.

A salute to Mike Leach, a life well lived and without a doubt, he contributed in ways beyond my words. Rest in peace.

Odds are that Ole Miss wins, but if Texas Tech can tighten up some fits to stop the Rebel rushing attack, I think Texas Tech can pull off an unlikely win. It wouldn’t be a huge upset, but enough to be an upset. Shough’s been really good and tough, the exact sort of quarterback you want and it will be fun to watch these two offenses go at it for a full game. I’ll take Texas Tech and those points. Let’s go.