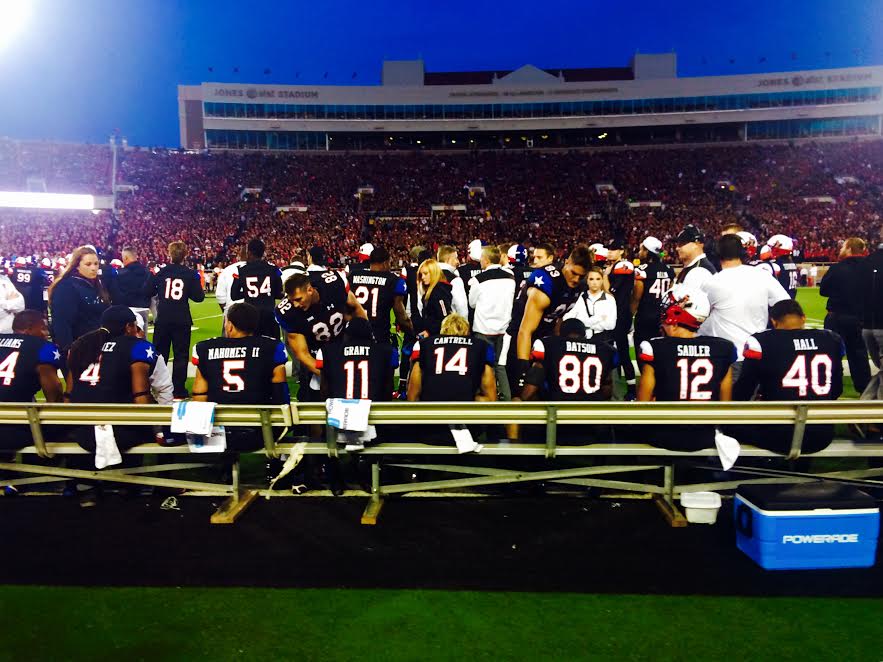 In The Morning Stake, we have a new look for Staking The Plains, so don’t be afraid. Baseball takes the rubber match against San Diego State, and we have a bunch of updates on recruiting as Rivals in Austin and Nike in Dallas both held camps this weekend with lots of Texas Tech mentions.

New Look for Staking The Plains.  Don’t be alarmed. I changed the theme of Staking The Plains yesterday afternoon.  This is the look that I originally wanted and I couldn’t find the right theme to make it happen.  Well, I found the theme that I was happy with over the weekend, so here we are.

I also wanted to mention that if anyone has any photographs of the llano estacado or some beautiful shots of Texas Tech sports that you took (yes, you must be the person that actually clicked the shutter) and you wouldn’t mind if we used some of them, that would be great.  You can send them to stakingtheplains@gmail.com.

“Over a long career, John Scovell has left an indelible mark on the game of college football,” said NFF President & CEO Steve Hatchell. “He developed his leadership qualities on the field, quarterbacking the Texas Tech Red Raiders while being named an NFF National Scholar-Athlete in 1967. The lessons Scovell learned on the football field have contributed greatly to his business and civic leadership, which includes serving as a past chairman of the Cotton Bowl and currently as President & CEO of Woodbine Development Corporation. He is truly an embodiment of the good in the game of football, and we are extremely proud to honor him”

Weekly Red Raiders. Continue to get your fix while you can (i.e. while it is free) as Wreck’Em 24/7’s Michael Labarre has his weekly Red Raider feature, although there isn’t all that much news right now. I think that will change the further along we get in the spring and early summer.

Recruiting Stuff.  There appeared to be a couple of competing camps, but in different cities, in Texas.  In Austin, you had a Rivals camp and in Dallas you had the Nike Camp.  Matt Clare, who also writes for Red Raider Sports, help out with Kynon Cordington to recap the Rivals combine in Austin.  This includes notes on newly offered WR Jordan Brown (6-1/200) from Stillwater, who only holds one other offer, from Navy. Also, Matthew Yarborough (6-0/245) from Sachse, who Texas Tech hasn’t offered yet, but is recruiting at defensive end and defensive tackle.  Yarborough traveled the state during spring break, including Texas Tech.

In Dallas, 24/7 Sports Ryan Bartow recaps the Nike camp, including that Tristan Wallace says that TCU now leads, but has a top five of Texas Tech, Baylor, TCU, Ohio State and Texas.  A couple of notes from there is that West Mesquite tight end Donte Coleman (6-4/219) says that Texas Tech and TCU are recruiting him the hardest, and receiver Camron Williams (6-3/210) from First Baptist Academy also said that TCU and Texas Tech are recruiting him the hardest, but TCU wants him at linebacker.

You should also check out our friends at The Football Brainiacs.  And yes, they’re our friends believe it or not. One of the few blogs that has reached out to me after moving from VTM to STP to wish me luck and assistance if I need anything.  They have some looks at three different quarterbacks, Chandler Garrett (6-4/210) from Mustang, Oklahoma; Nick Starkel (6-3/185) from Argyle, but played at Liberty Christian; and Patrick McKaufman (6-4/179) from Oklahoma City, Oklahoma.  Both Garrett and Starkel are your prototypical pro-style quarterbacks, while McKaufman is a dual-threat quarterback.  I’d watch news on McKaufman given the guys that Texas Tech is considering and offering, although FB says that Texas Tech has been in contact with Garrett.