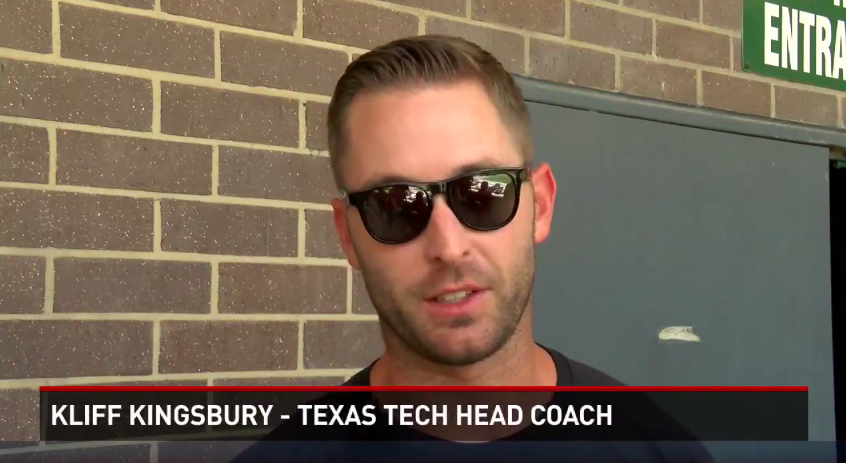 Texas Tech was in Longview yesterday for their camp in the East Texas area and there are few places that take their football as seriously as East Texas, where the coverage is really well done.  From the video below, check out head coach Kliff Kingsbury discuss the importance of holding a camp in East Texas and the pipeline of players that Texas Tech has developed from the area.

We also are lucky to have a ton of coverage, namely from ETSN’s Mike Graham (former writer for RedRaiderSports and Red Raider) who has a huge notebook. Seriously, I can’t blockquote everything that’s there, so go check it out. In any event, Kingsbury talked about the importance of these camps:

“Even with all the sites, like Rivals.com and Scout.com and all those things, there’s guys that slip through the cracks,” the head coach said. “That’s why these camps are very helpful. They get us out around the kids and we can see what is all out there. We’ve had great turnouts at all the camps, particularly this one. Every year, you find a diamond in the rough.”

Kingsbury also talked about the type of players they find in East Texas:

“We think the kids are some of the most talented,” Kingsbury said. “But more importantly, some of the most hard-working and appreciative that we deal will. Obviously, our team is starting to have more and more players from this area. A bunch of starters who are emerging from East Texas. We’re trying to hit it harder and harder. This place has really grown on us and we’re going to try to get as many players from this area as we can.”

Graham also has quotes there from Kingsbury about Pete Robertson, Patrick Mahomes, Keke Coutee and Broderick Washington. A ton of stuff there, so go check it out.