The Texas Tech defense has typically been categorized as a bend-but-don’t-break, keep-everything-in-front-of-you, force-the-opponent-to-execute-all-the-way-down-the-field zone defense. A running quarterback has always been a thorn in the side of the Texas Tech Red Raiders because they eat that kind of defense for breakfast. The issue seems to be compounded when the offense is running some sort of zone read.

The standard method of defending such a QB (and the read option) is to commit a defender to him, every snap. The only problem is, you’re now limiting your pass rush or pass defense. We saw this two years ago when Tech hosted TCU when Matt Wallerstedt committed Pete Robertson to “spy” the Trevone Boykin. It was marginally effective in this game because, at the time, Boykin was not that great of a passing QB.

Which brings us to this past weekend. Tech was facing Jared Johnson of SHSU, not a prolific passer, but good enough to beat you through the air if you didn’t force the issue with a good pass rush. He was also pretty capable of gaining yardage on the ground with both, designed QB runs and scrambling when the play broke down (or pass coverage limited his options).

The play we’re looking at came in the second quarter. Johnson had already displayed his ability to run on the Tech defense and the SHSU coaches started calling more designed QB runs and options. So on a 1st and 10, SHSU called an speed option to the left behind two wide receivers and their H-back/fullback/TE. 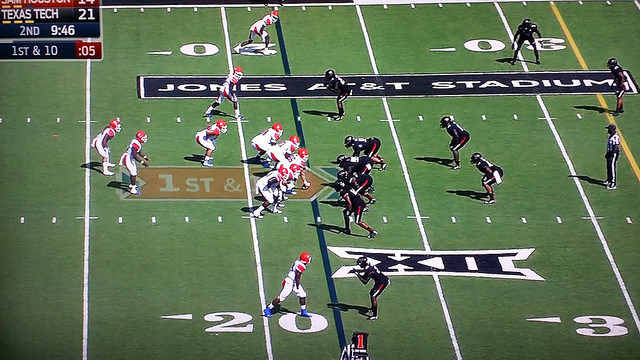 You can see Tech is in their nickel defense with three corners and two linebackers. We’re really going to be following Tevin Madison, who is covering the slot receiver and is lined up tight on the line of scrimmage, and linebacker Malik Jenkins, who is lined up close to the right hash (and will come all the way across the formation to make the play). 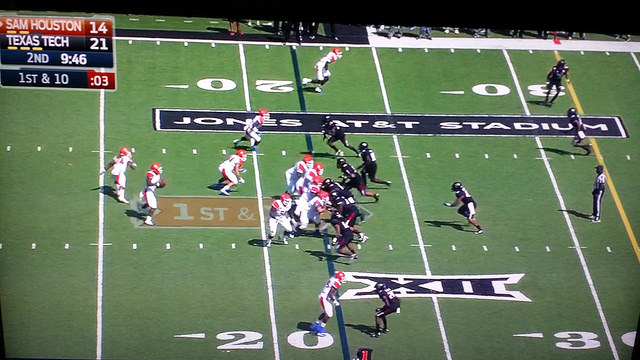 Right after the snap, you can see the Tech defense reading this play and flowing to the left. Middle linebacker Micah Awe is attacking the line of scrimmage to the play side, and Tevin Madison is breaking to the inside of his blocker. Jenkins is following the play to his right and you can see that play side safety already coming down into the box in run support. It appears the SHSU offensive line is letting Awe through as the read man, or to be picked up by the full back. 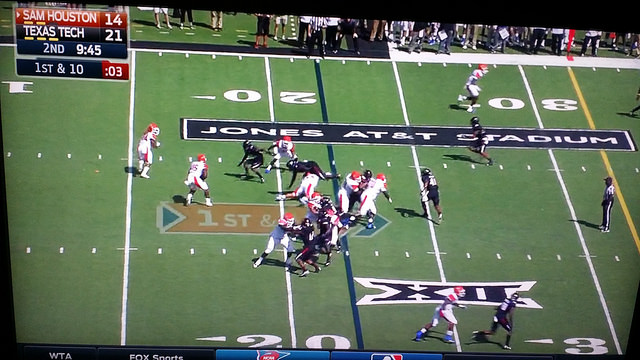 Talor Nunez is occupying two offensive linemen, allowing Jenkins to flow across the formation unblocked. Awe is being cut by the full back and Madison has beaten his blocker to the inside to force the read to happen sooner than anticipated.

As mentioned before, the way to defend a running quarterback and the option read is to commit a defender to each, the QB and the pitch man. You can sometimes get away with using your read man to defend both, but he has to be super disciplined and run upfield to the mesh point and not either the QB or running back (which doesn’t work on a option pitch play, like this one). But as you can see in the screenshot above, Tech doesn’t have two players defending the option, just one – Madison. In this instance, most defenders are advised to cover the pitch man, to force the QB to hold the ball and go back inside towards the rest of the defense, with the added bonus of hitting the opposing QB. But Madison is not in the best position; off balance and caught between the two offensive players. What he does is highly aggressive as he shoots the gap between the two when the QB starts the pitch motion. 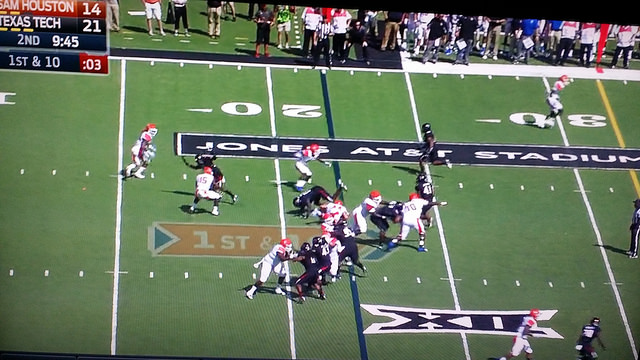 Had the QB pitched the ball, Madison was in position to deflect the pitch or possibly even intercept it and walk into the endzone. The QB held the ball and cut upfield back toward the middle of the field, which was the ultimate goal. At this point, you can see the playside safety (Ward) and Jenkins approaching the line of scrimmage. The RB is out of the play and can’t cut back to pick up a block and the slot receiver is looking towards Jenkins as a secondary blocking responsibility.

Here, the slot receiver has turned back to the outside to pick up Ward and Jenkins is approaching the QB. Awe is back on his feet and the Tech defense appears to have the runner surrounded.

Here, you can see Jenkins has grabbed the QB and is working on stripping the ball with other defenders closing in to help finish the tackle. In the end, Jenkins finishes the tackle at the line of scrimmage for no gain.

You may scoff at stopping a run play for no gain as being an outstanding play on defense, but when you consider how terrible Tech has been historically at stopping the option and QB runs, and how many opportunities there were in this play for Tech to break down, stopping a running QB on an option play for no gain is a welcome progression. You can certainly feel good that the defense is being taught good fundamentals and is making progress.