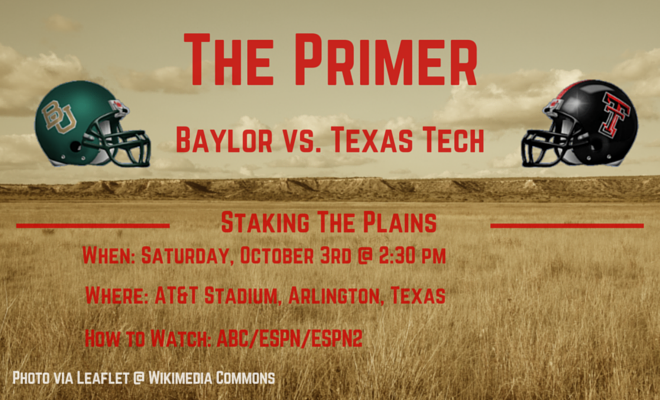 We’re getting you ready for Baylor, including odds, when, where and how to watch the game, key players for Baylor and a recap of their season.

What’s at Stake: This is Baylor’s first conference game of the year. Prior to the Rice game, they had an off week, and they tuned up against SMU and Lamar. Both of those games were obviously wins, but there was some criticism that Baylor in general didn’t see as on point (I didn’t watch a second of any of their games, just trying to give the general vibe). For Texas Tech, they don’t want to fall to 0-2 in the Big 12 conference and most Texas Tech fans knew that this three week stretch of Arkansas, TCU and Baylor would be incredibly tough and have come away with a win, a near-win (which is a loss) and now Baylor.

Miscellaneous: Baylor was roundly criticized for it’s first two games against SMU and Lamar, largely because the wins were lackluster overall, but there was a big emphasis during their bye week prior to the Rice game about how they needed to be more focused and that’s exactly what happened . . . I thought that Baylor wouldn’t beat the spread against Rice (I can’t recall what it was, but it was heavy) because Rice runs the ball quite a bit and I thought they would control the clock quite a bit . . . that didn’t happen as Baylor pounced immediately on Rice and never let up . . . the offense was criticized more, but the defense wasn’t exactly playing up to par, but that also changed against Rice, where they limited the Owl running game to less than 200 yards . . . Rice, though, is fairly one-dimensional, although they did manage 5 sacks against a team that favors the run significantly more than the pass . . . Baylor allowed Rice to convert only 4 of 13 on 3rd down and Rice only completed 11 of 21 for 152 yards passing, while only allowing 94 yards on the ground . . .