This week, we look at how misdirection with Jakeem Grant opened up some space on a critical fourth down run.

In the opening drive of the game, Tech threw a quick sideline screen to Jakeem Grant and three or four West Virginia defenders absolutely collapsed on it to stop Grant for a minimal gain. It appeared this was the game plan for the Mountaineer defense as Grant only had seven yards on five catches in the first few drives for Tech. I actually mentioned this to the rest of the STP staff that the WVU defense crashing in on Grant’s motion was absolutely the best thing from Tech’s opening drive where they ended up punting because it’s setting up an easy misdirection play where you put Grant in motion but the ball goes elsewhere.

I thought Kingsbury would take better advantage of their over pursuit of Grant, but he saved it for a key fourth down run.

On fourth and 1 with ten minutes to go in the game and Tech down by 10 points, the offense needed to stay on the field and score points.

This is an unusual formation for a spread offense like Tech. Mahomes actually fumbled the snap from a formation like this one in the previous game against Oklahoma State. 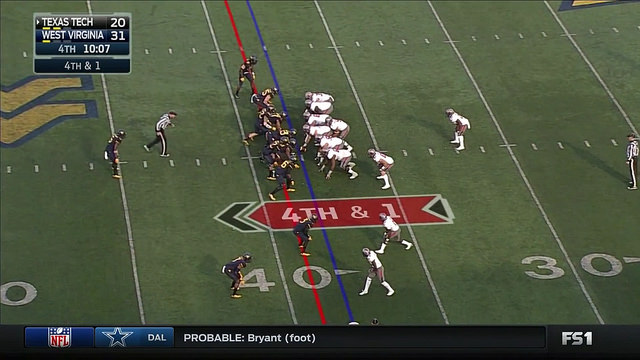 In the formation, you’ve got two wide receivers, two blocking tightend/H-backs (Tyler Scalzi on the LOS, and Brad Pearson in the backfield) and one running back. Mahomes sends Grant in pre-snap motion across the formation and through the backfield. 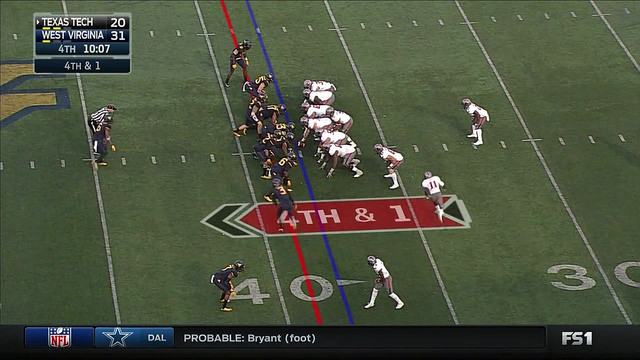 The defender responsible for Grant races across the field to mirror him and the man on the end of the line of scrimmage crashes in immediately after the snap to contain Grant should he have gotten the ball. At first glance, you would think Tech would have some difficulty running from this formation and defensive alignment with 9 defenders on the line of scrimmage, but this is where the motion pulls the defense away and opens up some space for DeAndre Washington. 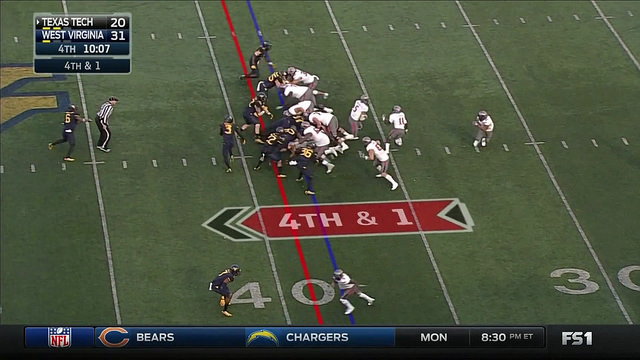 Mahomes times the snap to line up with Grant’s motion through the backfield to give the defensive the impression that the ball is going to Grant on a sweep, hoping to get him to the edge with the ball while he’s full speed. 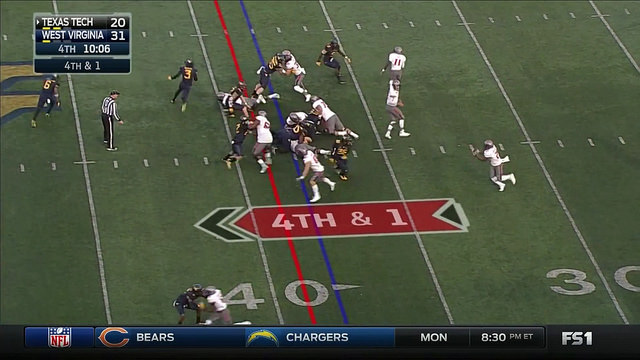 As Mahomes is making the pitch to Washington, the deep safety, the defender trailing Grant and the defender on the backside of the line of scrimmage are all focused on Grant. The offensive line does a decent job of blocking, although Pearson misses his man (he also crashed in following Grant) who is already in the backfield, although he’s got a lot of ground to make up to hope to make this tackle. 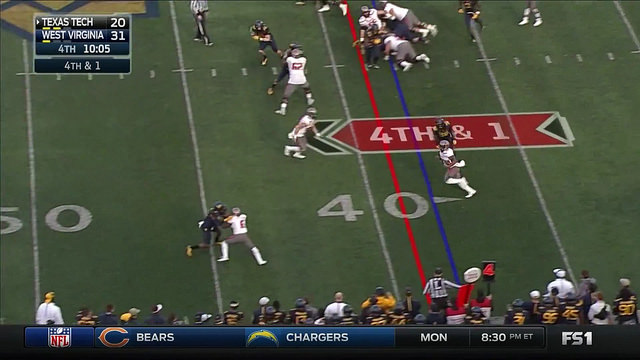 Washington receives the pitch and scoots around the edge where there is nothing but green grass ahead of him. Had Pearson not turned around and picked up the defender who is coming off the line of scrimmage and had Washington remained running towards the middle of the field, Washington could have scored on this play. Lauderdale holds his man up and Washignton ends up tripping on Lauderdale’s legs as he was trying to cut around that block to the outside.

If defenses are solely focused on taking a single player away like Grant, Kingsbury has shown he can call plays to take advantage of their over pursuit and gash them with plays to the space they desert.