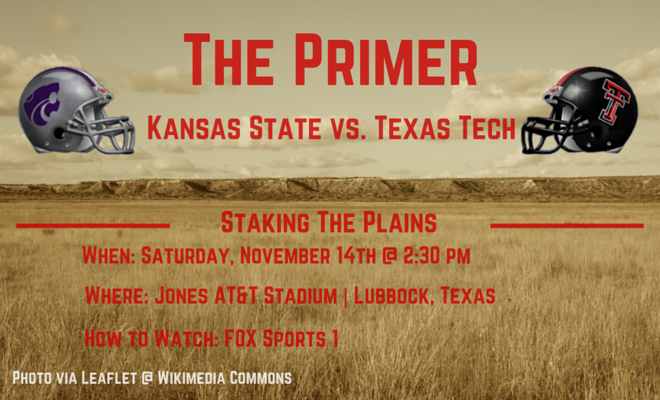 We get ready for Texas Tech to host Kansas State in the last home game of the year. When, where and how to watch the game, key players and more.

Last Week: Kansas State lost a close game to Baylor on Thursday night, 31-28 (ESPN box score). Of course, a Thursday night game means that Kansas State has had a few extra days to prepare for Texas Tech and get healthy. It was a solid performance from Kansas State, Joe Hubener was the star of the game, throwing for 151 yards and running for 153. Yes, you have to worry about the running threat of a Kansas State quarterback. Charles Jones ran for 76 as well. The Kansas State defense gave up a ton of yards early against Baylor, 420 yards passing, but only 103 on the ground.

What’s at Stake: Kansas State is looking to win their first Big 12 game of the

Miscellaneous: It’s ben a rough go at it for Kansas State in conference play, as they’ve faced Oklahoma State, TCU, Oklahoma, Texas and Baylor . . . the offense has struggled mightily, only 117th in total offense and the defense has been surprisingly bad, 93rd in the nation in total defense, but I think the Wildcats have had a ton of injuries to deal with on the defensive side of the ball . . . one thing to be worried about is the fact that Kansas State is great in the red zone, 14th in the nation, if they get there they are scoring . . . the defense has struggled to stop teams on third downs . . .