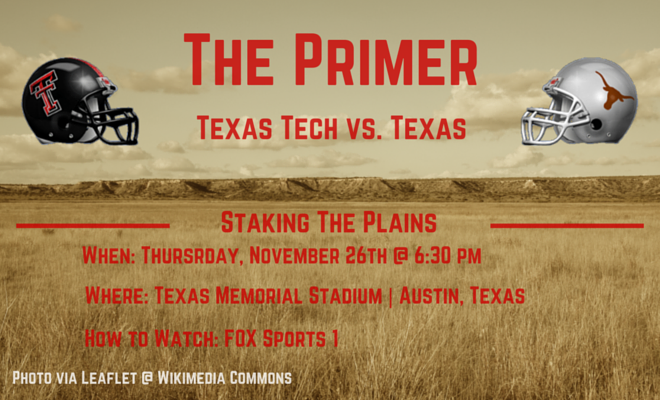 All you need to know for the Thanksgiving day game as Texas Tech travels to Austin to take on the Texas Longhorns.

Last Week: Texas lost to West Virginia, in Morgantown, 38-20 (ESPN box score). D’Onta Foreman was really good, carrying the ball 18 times for 147 yards, averaging 8.2 yards per carry, while Johnathan Gray carried the ball 14 times for 56 yards. Jerrod Heard was 11 for 18 for 162 yards, a touchdown and 2 interceptions. That’s actually a pretty good yards per attempt, 9.0, for Heard, which means he’s looking deep. The Texas offense rushed 54 times for 277 yards total, so they are going to run the ball. The Longhorn defense gave up 256 yards on 51 carries to West Virginia and the Mountaineers only passed 12 times for 122 yards. Seriously. Texas’ biggest problem was that they turned the ball over 5 times. Yes, 5 times. Losing 3 fumbles and the 2 aforementioned interceptions. Statistically, Texas won pretty much every category except for the turnover battle.

What’s at Stake: The Longhorns must win their last two games on the schedule to become bowl eligible, and the (bowl eligible) Red Raiders are the first step. Sadly, the Horns should have a bit of confidence in doing this, as Texas Tech hasn’t beaten UT since Crabtree’s catch in 2008, and haven’t won in Austin since 1997 (!). Basically, UT is playing for a tangible reward and Tech is playing to exorcise a long-lasting demon. Oh, and for the Chancellor’s Spurs. Remember those? . . . Yeah, most people don’t.

Miscellaneous: Texas Tech hasn’t beaten Texas in Austin since 1997 . . . the Texas offense is 94th in the nation overall and they have the 93rd defense . . . one of Texas’ biggest problems is third downs, where they are 112th in giving up third downs and 84th in converting them on offense . . . even though Texas doesn’t have the best offense, they are a top 25 rushing team, averaging 214 yards a game . . . and despite having a terrible day against West Virginia, where the Longhorns had 5 turnovers, the Longhorns are 31st in turnover margin at plus 0.50 . . .