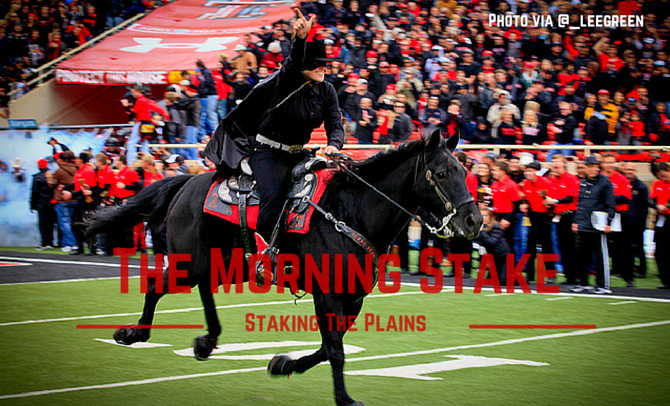 Le’Raven Clark and Jakeem Grant are named as second team All-Americans while Graham Harrell is to be named the offensive coordinator at North Texas.

The Red Raiders gave back to the Lubbock community and brought the holiday spirit to Covenant Children's Hospital pic.twitter.com/S0PF3skfZW

Kingsbury Media Availability. Head coach Kliff Kingsbury was made available after practice yesterday and there wasn’t anything ground-breaking that the media discussed yesterday. Don Williams did ask about firing his friends, Mike Smith, Trey Haverty and Kevin Curtis.

. . . Haven’t had a ton of time to look at them as been recruiting . . . Tremendous athletes and running back . . . Seemed like everyone is excited to be out there, energy was good and pretty crisp . . . Having in played an SEC West team, we know what’s coming, they were a top team in the country . . . Just excited for Jinks, an incredible job the AD did in finding Jinks. Just very happy for him . . . Their AD must be really good to find a coach, the type of man he is, found him a winner . . . Still sorting who will be on the field, start after the dead period starts on Sunday . . . We always try to find ways to get him the ball, he’s a super talent and has the ability to make people miss . . . Good start with guys like Jah’Shawn and Fehoko getting noticed as honorable mentions for Big 12 . . . It wasn’t comfortable, but we’ve moved past it and getting ready for this bowl game . . . They all three did a great job and appreciate what they did here.

Player Reactions to Coaches Moving On. LAJ’s Don Williams writes about the players’ reactions after Mike Jinks moving on to Bowling Green and the defensive coaches getting fired. As an aside, Jinks will stay with Texas Tech through the bowl practices. In any event, Kliff Kingsbury and CB Tevin Madison spoke about losing the coaches and Madison, in particular about Curtis:

Smith, Curtis and Haverty were part of the staff Kingsbury put together three years ago, so it’s a major shakeup for many Tech players.

“Oh man, guys are really unsure right now,” sophomore cornerback Tevin Madison said. “But we’re going to believe in what coach (David) Gibbs is doing and coach Kingsbury is doing, taking this program to the next step.”

Kingsbury is a robot.

Duffey on TV. If you’d like to watch Texas Tech signee Jett Duffey (and you live in the DFW area, just not sure about other areas) but you can watch Duffey on channel 21 KXTA in Dallas at 7:30 pm tonight. The game is being played at Birdville Fine Arts Complex, which is in North Richland Hills. The DMN talks with Duffey’s head coach about the system he runs and how Lake Ridge went from 0-10 to 14-0. The DMN also has a preview of today’s games.

Big 12 Things. Sports On Earth with the news of TAMU QB Kyle Allen transferring from the Aggies. The reason this is a big deal is that Allen may land at Oklahoma . . . via 24/7 Sports reported that Texas has hired their offensive coordinator in Sterlin Gilbert, the co-offensive coordinator at Tulsa. And surprise, surprise, Texas will not retain QB coach Shawn Watson, OL coach Joe Wickline and RB coach Tommie Robinson . . . via the DMN, Oklahoma QB Trevor Knight has been given his full release and will transfer from Oklahoma . . .