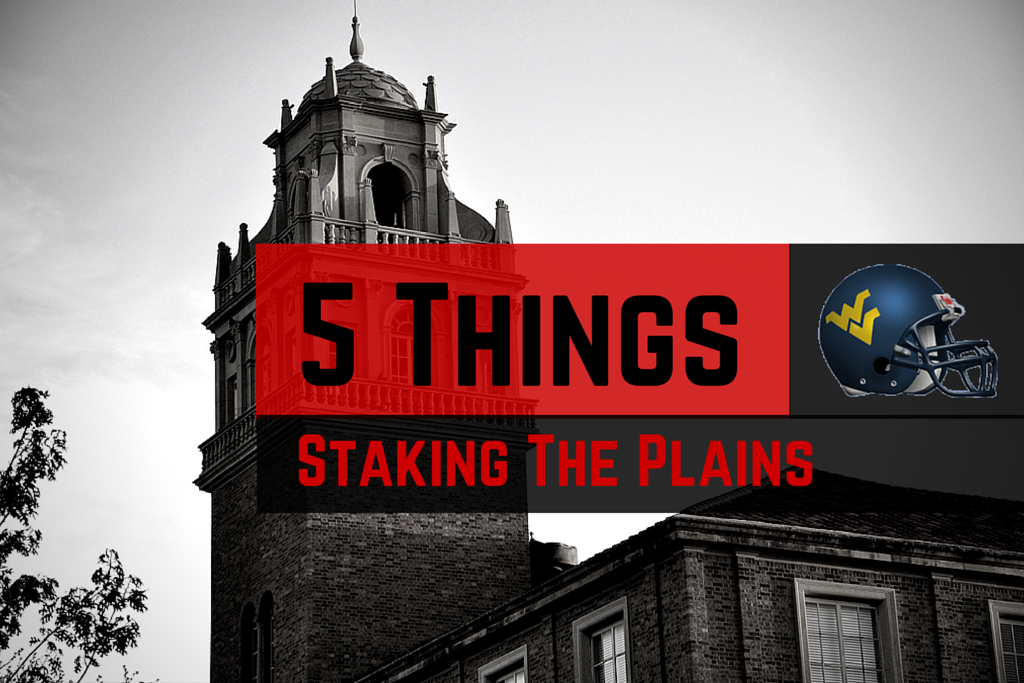 We check out the West Virginia Mountaineers, which is the 6th game of the year for the Texas Tech Red Raiders.

Lots of good pieces return on offense, starting quarterback Skyler Howard returns and although he wasn’t perfect, he really didn’t need to be because West Virginia was so good running the ball, which Howard had a hand in as well. From the outside looking in, Holgorsen seemed unhappy with Howard for his limitations in the passing game, and he certainly has some, but he seems to make up for it with his legs. By no means perfect, he causes opposing offense problems and coupled with some productive running backs, it’s difficult to stop West Virginia.

Leading rusher Wendell Smallwood went off to the NFL and led the team in rushing, although it has always seemed that West Virginia has had little trouble replacing their running backs. They seem to always find someone who can play. The best candidate might be Rushel Shell (5-10/220), who ran for 708 yards, 8 touchdowns and about 54 yards a game. The problem for West Virginia is that the other candidates are pretty much all redshirt freshmen or freshmen, the lone non-freshman being Justin Crawford, who is a JUCO commit from this past year who happened to be the NJCAA offensive player of the year and ran for 3,161 yards in two years averaging 6.7 yards per attempt.

One thing that WVU hasn’t really done is produce another high-profile receiver, some of that is the quarterback, but I’d guess that some of that is them as well. Shelton Gibson is the leading returning receiver, having caught 37 passes for 887 yards, which is about 24 yards per catch (that’s flipping terrific) and 9 touchdowns. Gibson is a true home run threat and he’s going to be a junior this year. Daikiel Shorts, Jr. caught 44 passes for 511 yards and 5 touchdowns. Javon Durante, Ka’Raun White also return and I would guess that this position group will be just fine for 2016. It’s a relatively experienced group that’s probably only going to get better.

There’s a lot to replace here, especially in the back seven. The defensive line returns Noble Nwachukwu and Christian Brown, both defensive ends and both productive, but especially Nwachukwu. They’ve got plenty of bodies there to fill in the gaps, with just one guy really needing to fill in at nose guard since West Virginia plays a 3-3-5. The most likely replacement at noseguard is probably Darrien Howard (6-1/297)

Gone are all three starting linebackers, Nick Kwiatoski, Shaq Petteway and Jared Barber, plus a large portion of the secondary, KJ Dillon, Daryl Worley and Karl Joseph. That’s a lot of production.

At linebacker, the likely candidates are Xavier Preston at the strongside, Al-Rasheed Benton in the middle and Sean Walters at the weakside linebacker spot. Holgorsen noted during the spring that he’ll be replacing the three defensive backs guys with upperclassmen, especially the secondary guys. Jarrod Harper and Jeremy Tyler will combine with Dravon Askew-Henry at safety and at cornerback is most likely Rasul Douglas and Antonio Crawford. There’s really not a lot of significant stats from these guys, although Askew-Henry had 59 tackles last year, an interception and 4 passes broken up and Harper filled in for Joseph, and had 36 tackles, 3 tackles for loss and 4 passes broken up.

West Virginia really was spectacular on defense last year, allowing just 24.6 points a game last year in the Big 12 is nothing short of spectacular. That was about 2.5 points behind Oklahoma and the one thing that held West Virginia back was the offense. Still though, with a middle-of-the-road offense, the Mountaineers still won 8 games and they had a really tough stretch at the beginning of Big 12 play, having to play at Oklahoma, then hosting Oklahoma State, then being on the road against Baylor and TCU. That’s got to be tough for a team like WVU that has to travel so far. A large part of the equation was turnovers for WVU and they were the best in the Big 12 in rushing defense. Those linebackers and safeties were so important in limiting opposing defenses.

Should also note that the new offensive coordinator is Joe Wickline who is now free from the Texas Longhorns. I thought that Wickline would be terrific in Texas and make that offensive line even that much more dominating, but that never really happened. Wickline might be a bit cantankerous, which should fit in really well with Holgorsen. I don’t mean that as a shot, but more of Holgorsen is cantankerous as well and seems like a strong personality and won’t take anyone’s flack.

Somewhat strange to think, but it seems like a lot of publications are putting Holgorsen on the hot seat, but it seems that much of that is driven by the fact that Holgorsen and WVU broke off contract negotiations in February of this year. None of the assistants have been granted extensions and it would seem that second year athletic director Shane Lyons may want to eventually look somewhere else. Holgorsen is set in Morgantown through 2017 and that’s it, meaning he’s really just got this year and next year on his contract. This is really a pretty bold move by the AD and pretty much out of the norm. Most coaches have 3-5 years on their contracts to entice recruits to want to come to the university.

Of course, this really has nothing to do with the matchup between these two teams, but I do think it’s important. I would imagine that the players, coaches and Holgorsen are all aware of the implications for every game this year.

The key for Texas Tech is stopping the run and that’s probably it. It was a close game last year and it was one with a bad penalty on an important down near the end of the game and it felt like WVU just laughed as they ran out the clock on drive after drive keeping the ball away from the Texas Tech offense. We’ll have a pretty good idea whether or not Texas Tech can stop a rushing attack having played Kansas State in the previous week.