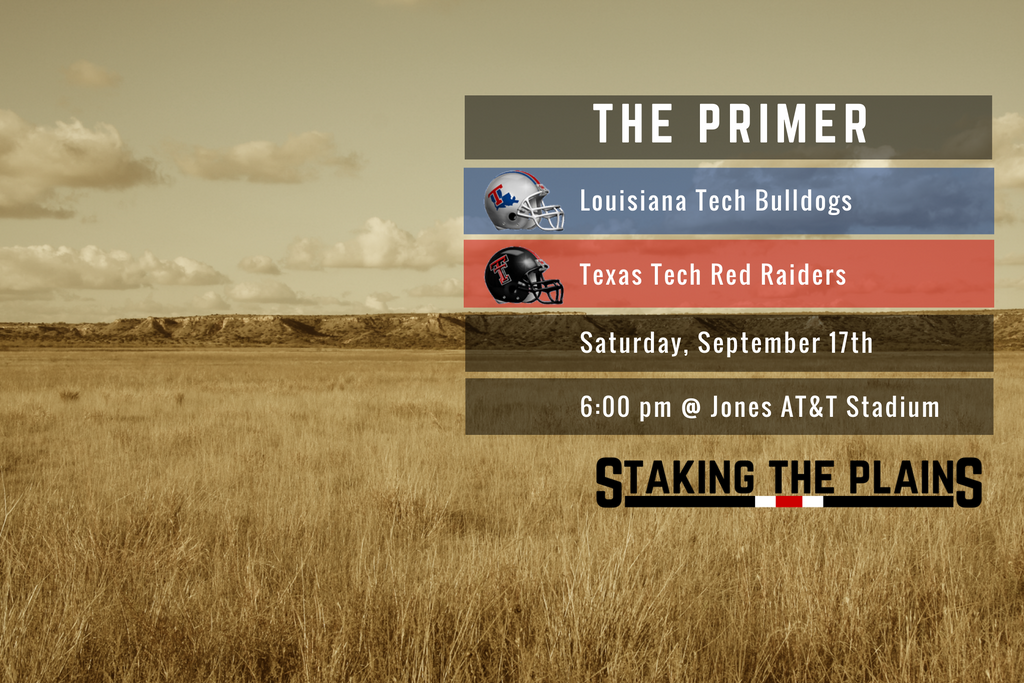 Our first post of the week as we get you ready for Louisiana Tech to visit Lubbock Texas for Texas Tech’s third game of the year.

Louisiana Tech narrowly lost to Arkansas, 21-20, with a freshman quarterback. Louisiana Tech wasn’t it’s normal offensive juggernaut, but they kept things close and almost pulled off the upset in Fayetteville. And then last week, Louisiana Tech laid it to South Carolina State, winning 53-24. The biggest difference in these two games was that their starting quarterback sat out against Arkansas, Ryan Higgins, and they played a freshman signal caller. The offense opened up quite a bit with Higgins at the helm.

1. QB Ryan Higgins (6-2/207): Higgins was suspended for the first game against Arkansas with an offseason DWI arrest (or DUI, I can’t remember right now), but he played on Saturday and he completed 34 of 52 passes for 409 yards, 4 touchdowns and 2 interceptions. That’s only good for 7.9 yards per attempt, which is just fine, but look for Higgins to try to pick apart Texas Tech this week.

2. WR Trent Taylor (5-8/178): Taylor had a relatively quiet week 1 against Arkansas, 8 for 78 yards and no touchdowns, but he exploded against SCT, catching 11 passes for 178 yards and 3 touchdowns. He’s a difference maker.

3. LB Dalton Santos (6-1/260): Santos is the former Longhorn, now playing for Louisiana Tech for his senior year. He has 14 tackles and 1.5 tackles for loss on the year. I’m shocked that they have him listed at 260, that’s huge for a linebacker and I’m also surprised that he’s able to move around in space to make plays at that weight. It would seem that this would be an area to exploit for Texas Tech.

4. S Xavier Woods (5-11/197): Woods is a dude, physical and active at safety. He has 15 tackles on the year to go along with 1 tackle for loss, a sack and an interception. Don’t forget that Kevin Curtis is now coaching defensive backs for Louisiana Tech and I’m sure he’d like to show up just a little bit against Mahomes.

Via OddsShark, the line opened at Texas Tech -12, but has moved to -11.5 in some books. I’ll be interested to see how this line unfolds this week.