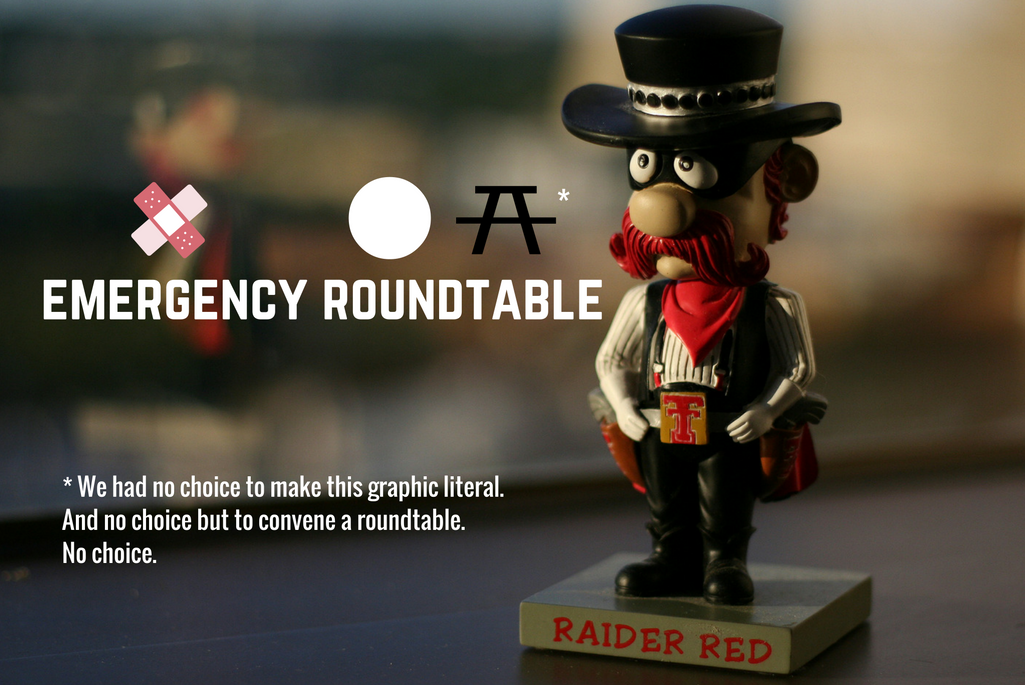 The gang convenes yet again to tackle the toughest issues.

seth: Alright, we’re ready to convene for round two of the STP roundtable. First up is something that you all brought up last night, which was an article about how it is Kliff Kingsbury is the one that needs to tell the students about not saying the f-word. So yeah, that’s going to go over well.

briandc: On one hand, I understand due to the fact that teams can be penalized for unsportsmanlike conduct from fan’s behavior. On the other. . . well, coaches have enough on their plate, and I’d prefer Kliff not have to babysit students on top of everything else. Full plate as is, let Hocutt & the athletic department figure that out

I’ll also say I have no idea how to get students to stop doing that. We still have them dressing up like Heath Ledger’s Joker in the stands for some reason, so it’s sometimes hard to let go

seth: Didn’t Mizzou have a big problem with this? I think the Antlers or something, where they were incredibly profane, to the point that the Antlers had to be disbanded.

Oh, they even have their own Wikipedia page.

And they were eventually kicked out of a game.

meestahrogers: Kingsbury making a comment about it and saying he thinks we (the fans) need to be above that is about as far as he needs to go. No special projects, or videos, or ads placed in the DT. The fans that were involved, which I’m assuming was mainly/only students, need to be better.

He’s said and done all needs to do. We as fans need to hold ourselves to a higher level if we’re expecting anything to change (assuming we feel the need to change at all)

seth: Isn’t that the key though, that the students somewhat have to take some responsibility and I think the university has made attempts to work on this, but nothing has really worked. I don’t know why Kingsbury would be any better. As my wife often tells me, “You’re not the boss of me” and I can just see the students yelling at old man Kingsbury and telling him to get the hell out of here.

meestahrogers: Wasn’t the “Silent Scare” dreamt up years ago an attempt at curbing some booing or whatever as the opposing team took the field? And what happened after they put all that effort into that campaign. The students booed louder and harder (is that a thing?) than ever

briandc: I feel there’s a deeply rooted rebelliousness in the fanbase that’s picked up like a mantle with each successive year. I don’t know how far back, exactly, but at least the 90’s with the tortillas, then Leach coming in and having his personality become the id of the students. Then with the perception of what UT and A&M are, Tech kind of settled into this aura of “screw you we’re out in Lubbock and it’s alien to you and we love it” and the Jones became this blackhole where teams dreaded playing at night. I don’t know, all these things seem to have compounded into something incoming students expect to step into, they buy into that sense of the other sometimes to a fault, much to the chagrin of alums

seth: I think this is exactly it Brian, taking on that rebel with a cause sort of thing (or maybe it’s without a cause in this instance).

briandc: As a student during the peak Leach era (class of ’09), I know how intoxicating that atmosphere can be. I always tried to be aware and courteous of opposing fanbases but I did some things I’m ashamed of and would definitely take back. Some may still think “oh that’s not bad people are just too PC,” but if you think about how you want your university to be represented, I don’t think what I did lines up with it. Would you rather be offensively funny to some or mischieviously inclusive?

michael: I’m late to this party, but I feel the same way about Kingsbury’s responsibility in all of this. The young men on the sideline are his main focus, as they should be. I saw a local media personality (Ryan Hyatt) on twitter actually say “it’s on Kliff because he can effect the most change.” That is unfair, and completely out of line with what Kingsbury is already tasked with doing. He’s not leading chants on the sideline and asking for the crowd to spew f-bombs at former quarterbacks. He’s coaching a damn football game or coming up with how we’re going to score 50 points next week while, hopefully, only allowing 49. He’s watching Narcos. All of these things are of more importance than his attention to the student body’s shenanigans.

As Brian said, it’s up to Hocutt or someone else within the faculty to determine how to curb this trend. I did plenty of stuff in the stands as a student that I’m not proud of, so like most of us, we can see it both ways. Yes, they’re doing what we did, too, but it doesn’t mean we have to like it. I think the only way to incorporate a change is to start with the youngest students and maybe really reiterate it during freshman orientation. Since I was a lowly transfer, I missed out on orientation. As a result, I just picked up everything that the students in the stands were doing and went with it, good or bad. (edited)

seth: Okay, so to switch topics here a bit, this was from Don Williams notebook from yesterday and it certainly raised my eyebrow.

Kingsbury said last week the Red Raiders were having more physical practices, but he didn’t attribute Williams’ and Hinton’s injuries to the changes.

“I wish I could say it was from instances of their being overly physical, but that was not the case,” he said.

So, are we about to see the transfer of D’Vonta Hinton? And if so, have you given up trying to figure anything out at this point?

Oh, and I think Chris Level said that Hinton and Williams weren’t even on the sideline.

meestahrogers: I didn’t even make that connection between those players missing the game due to injury and possibly transferring. It does make you wonder how they got hurt since he didn’t attribute it to practice and didn’t elaborate

briandc: I don’t know, I feel that we as fans like to read between the lines way too much, especially when it comes to reading the tweets of players that are just barely out of their teens. Could it be smoke that leads to fire? Maybe. Or maybe Williams & Hinton were doing something dumb and there actually was an injury or it was stupid to the point of punishment. I don’t think we’ll know until something actually happens

seth: When Level talked about it, it was one of those deals where he didn’t comment really at all. At this point, maybe it’s me reflecting the somewhat depressed state that I’m in in covering this team. Depressed is too strong of a word, but it certainly feels like this team really can’t catch any breaks and if the defense could just show some marginal signs of improvement.

And maybe this is something where we have a more in-depth discussion after the end of the year, but what do you do about David Gibbs? Does he get a new contract or does Kingsbury try to find someone else?

briandc: I think not giving Gibbs another year would be foolish, as coordinator attrition is a massive part of why we’re in the situation we’re in. Next season the defense will be full of “his” guys, so if he can’t do anything then, you have to look elsewhere. This defense was a massive rebuild project

michael: You all know this, but Texas Tech is last or near last in about every defensive statistical category. I don’t know what to do from here. I’m usually one to go with the consistency aspect of things (keeping Gibbs), but part of me feels like this is an impossible job that even Buddy Ryan couldn’t fix. It feels like a hopeless endeavor no matter who is trying to man the ship. Deep down, Gibbs has to feel the same way, right?

michael: Sorry… I blacked out for a second. I didn’t type anything too depressing, I hope.

briandc: I’m still not convinced we’re under a curse, and it will take many sordid occult rituals to lift it. I think we need to go to New Orleans and do some research

We’re not* under a curse

michael: Let’s make a road trip out of it and head on over to Savannah, just in case. 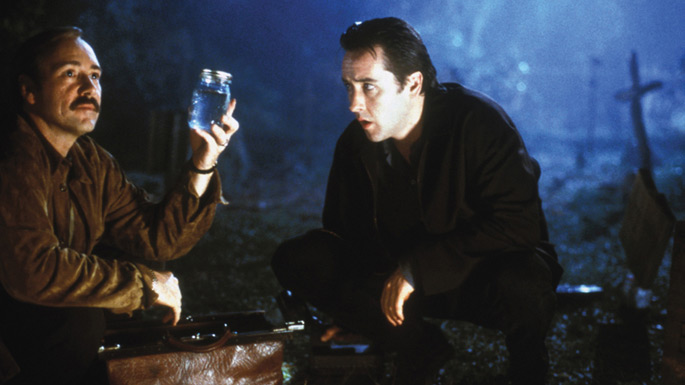 meestahrogers: Convince myself that Gibbs is the answer. We’ve beaten the drum about needing to be consistent with our staff and let them have a chance. But we’re starting to see the hole in his philosophy of forcing turnovers, that when that’s not happening, what’s left is a very soft defense. And I’m not sure we need to wait until Gibbs has “his” guys (because that would take 3 more years if we give him the same amount of time to get his players as we’re trying to give Kingsbury). There are more of Gibbs’ players in there this year than last and this thing is somehow getting worse