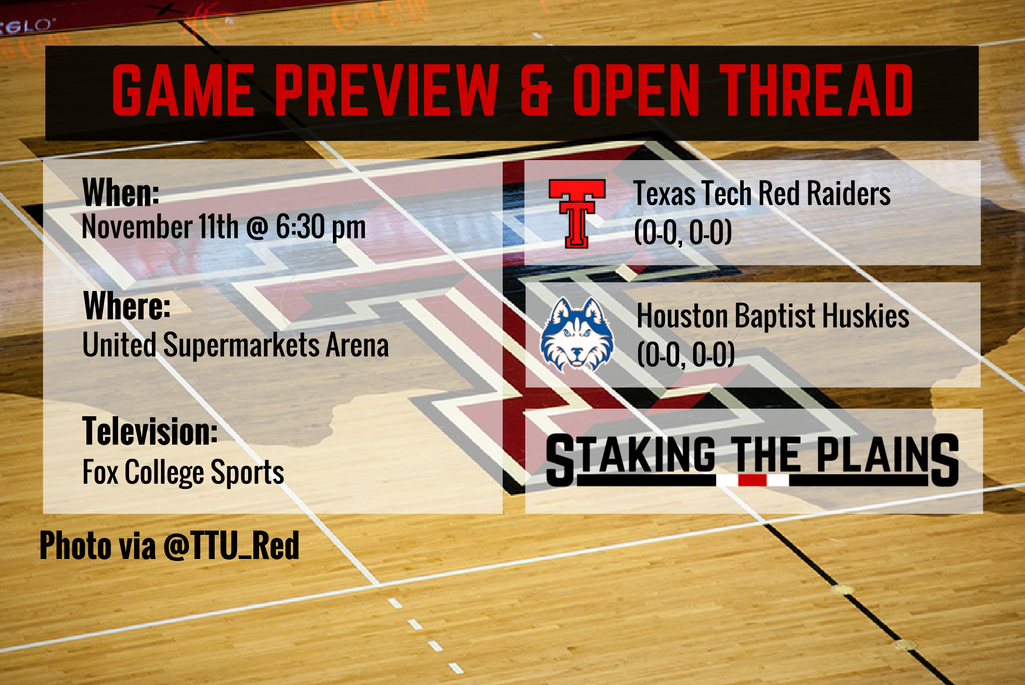 1. KenPom says that to start the season, they are the 42nd best team in the nation, sandwiched between Florida State and UConn in front of them and Rhode Island and Kansas State below them. An AdjO of 106.7, good for 48th in the nation and AdjD at 92.1, good for 31st in the nation. It will be key for Texas Tech to continue that defensive presence that Tubby Smith brought to the team. Meanwhile, Houston Baptist is the 294th best team, rankin as the 270th best in AdjO and 307th in AdjD.

2. The worst thing about this team isn’t about the team at all, but about the lackluster schedule. Last year, Joe Esposito set up a near magical schedule that vaulted Texas Tech to their first NCAA appearance since Bob Knight and now, that schedule isn’t all that great, other than the games as part of the Cancun Challenge. There’s this line between challenging and winnable and right now, very few of those teams click the challenging aspect. North Texas, Eastern Kentucky, Auburn, Idaho State, Incarnate Word, Rice, UTSA, Nicholls State, Richmond and Longwood round out the non-conference slate. If you’re thinking to yourself that this reads more like a Baylor football wish list of non-conference opponents, you would be correct. The team will need to be virtually perfect in their non-conference games.

3. You’ll note that I’ve got the starting lineups and a huge bench because at this point, I’m not sure who’s going to suit up and who isn’t. Pay no attention to the starters and the order on the bench. I don’t have a clue at this point, but we’ll know a bit more after tonight, at least the starters. I wouldn’t surprise me to see Livingston start or Stevenson push out Gray with Millinghaus at the shooting guard. I just don’t know, but I can’t wait to find out.

4. Beard runs the traditional motion offense as well as some European sets as well. The motion offense is simplistic in that it is once you pass the ball, you screen away. I think you’ll find the offense to be a bit more tricky, but free-flowing once things really get moving. The European portion of the offense stems from the idea that of stretch post players, who can hit outside shots and that in turn opens up the middle of the lane to drive and dish. This is why Ross and Livingston probably started as they can both stretch the court. And maybe more at the center of how the offense goes is Keenan Evans, who has as much potential as anyone, but he’ll need to figure out how to hold onto the ball more. If I had to guess, I think McLean is the guy that pushes Evans on offense. But it’s going to be critical that this team stop turning the ball over.

5. I’m excited for this season and I have some decent optimism about how things turn out for this team. Texas Tech could throw out a good starting five of returning players (Evans, Gray, Smith, Ross and Odiase) or a decent lineup of transfers (McLean, Millinghause, Stevenson, Livingston and Brandsma). There’s lots of options and that may be the most difficult thing about this team, which is how to divide up the minutes. Should be a fun ride moving forward.