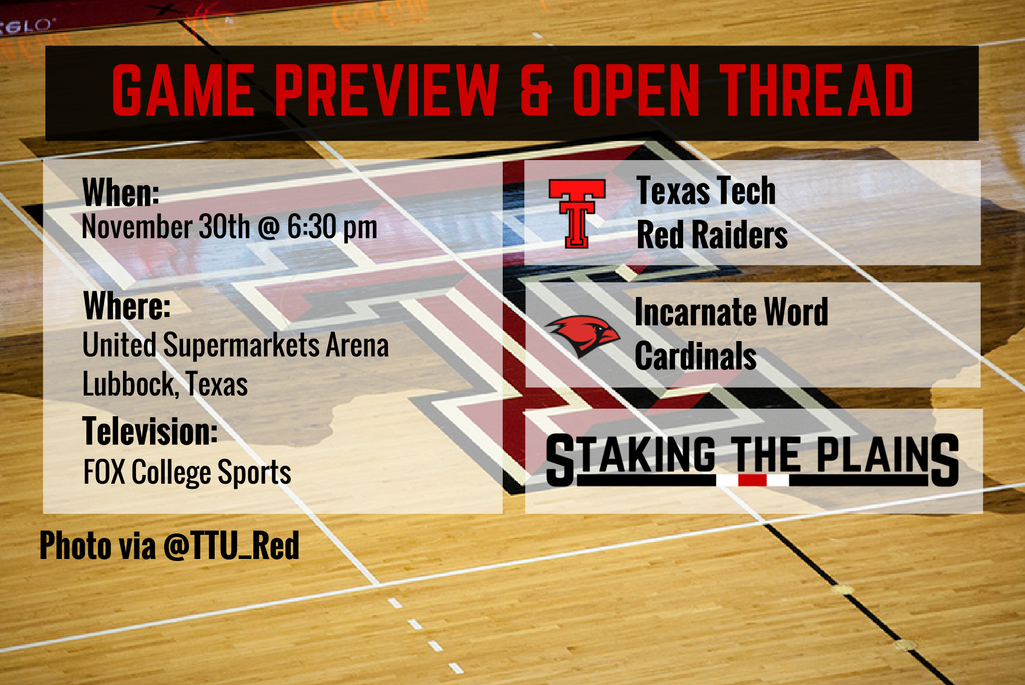 The Red Raiders host the Cardinals of Incarnate Word.

2. How in the heck are there two players named Kite, presumably brothers, one is 6-3 and the other 6-11? Jorden is a redshirt freshman while Jerred is a senior. They also have a player with the last name “Socks” which I pretty much love.

3. I didn’t get a chance to do a post-game write-up on the win against Idaho State. It was by far the best the team has looked offensively, but Idaho State was playing short-handed, without their best player who was suspended, and they just aren’t a highly rated team. The soft non-conference schedule will get a little tougher as Rice comes to town and they’re 112th in KenPom ratings, while Richmond is 96th overall. This team is going to start Big 12 play against Iowa State largely untested.

4. There was a point in the game against Idaho State where Texas Tech ran out a lineup of Evans, Millinghaus, Stevenson, Gray and Temple. That’s a four-guard lineup that’s really interesting. Plus, the lineup designated above is how Beard started the game, with Thomas at the point with Evans at the off-guard, Gray at small forward and Smith at the power forward while Livingston is at center. Beard really isn’t afraid to tinker with the lineup and with Ross sitting out a few games to make sure he’s all healthy, Beard has plenty of options and he’s not afraid to use them.

5. Tonight’s game shouldn’t prove to be much of a challenge and I’d expect another 20-point win. As an aside, Gio McLane had to stay an extra couple of days in Cancun with some sort of passport issue. I hope he had the time of his life unchaperoned and in Cancun without a care in the world. I also hope he’s back in Lubbock.