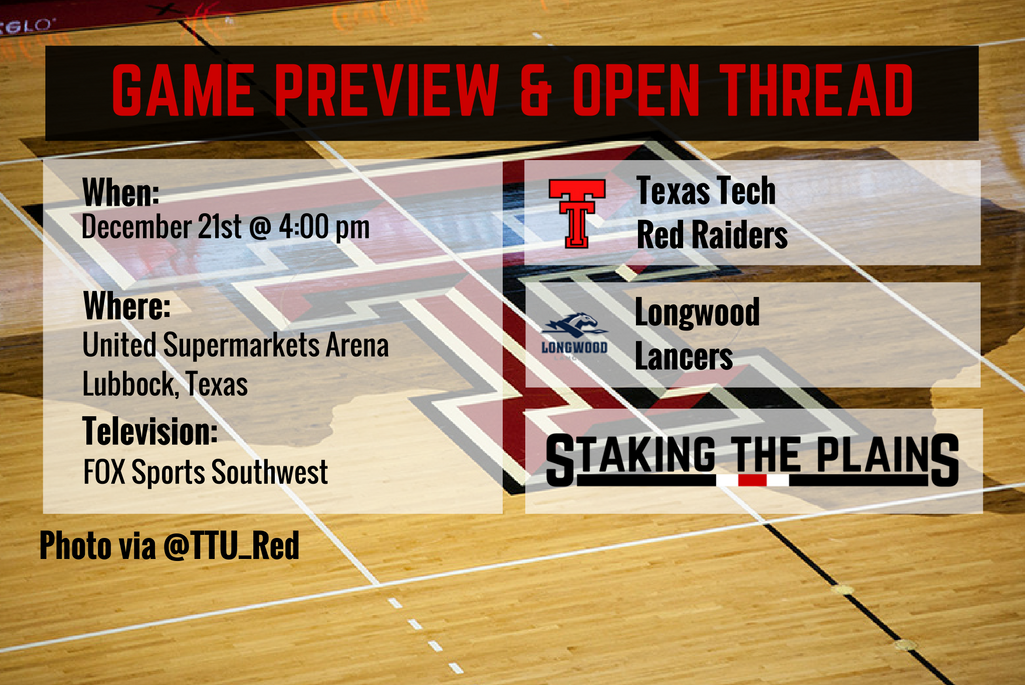 The Red Raiders host the Lancers in the last non-conference game of the year.

2. This is the last game before a long break for Christmas as Texas Tech will travel to Ames, Iowa on December 30th to take on Iowa State. That’s a really long break when a lot of teams are playing in holiday tournaments and Longwood is an opponent that just played Ball State and lost on Monday and have been on the road since December 9th, losing to Creighton, George Mason and Ball State. This is probably a team that’s a bit road weary.

3. LAJ’s Krista Pirtle writes that Texas Tech is going into this game with the thought that every opponent is a tough opponent and the game of the year:

“That’s how a competitor has to feel,” Tech coach Chris Beard said. “If you don’t feel that way, then the game and the competition will humble you very quickly. I’ve been trying to get that across to our guys, and I think they’re really starting to understand that. I hope they share that same view.”

4. This really shouldn’t be much of a game at all because Longwood is down to eight scholarship players and they’re just having a tough go at it right now. This stinks a bit for Texas Tech in having an opponent that really shouldn’t be a very tough opponent. Texas Tech is about to start the grind of the Big 12 season at Iowa State, hosting the team that is just annihilating opponents, West Virginia, then going to Kansas and hosting Kansas State. That’s going to be a tough start, but there really won’t be any easy games this year.

5. Hopefully, we’ll see the return of Norense Odiase this game as he was supposed to return before conference play and hopefully he gets about 20 minutes. If Odiase returns, then this team is at full strength heading into conference play. This may be the deepest team that Texas Tech has had in recent memory and if they play to their potential, then I do think that there’s the opportunity to finish in the top half of the conference.