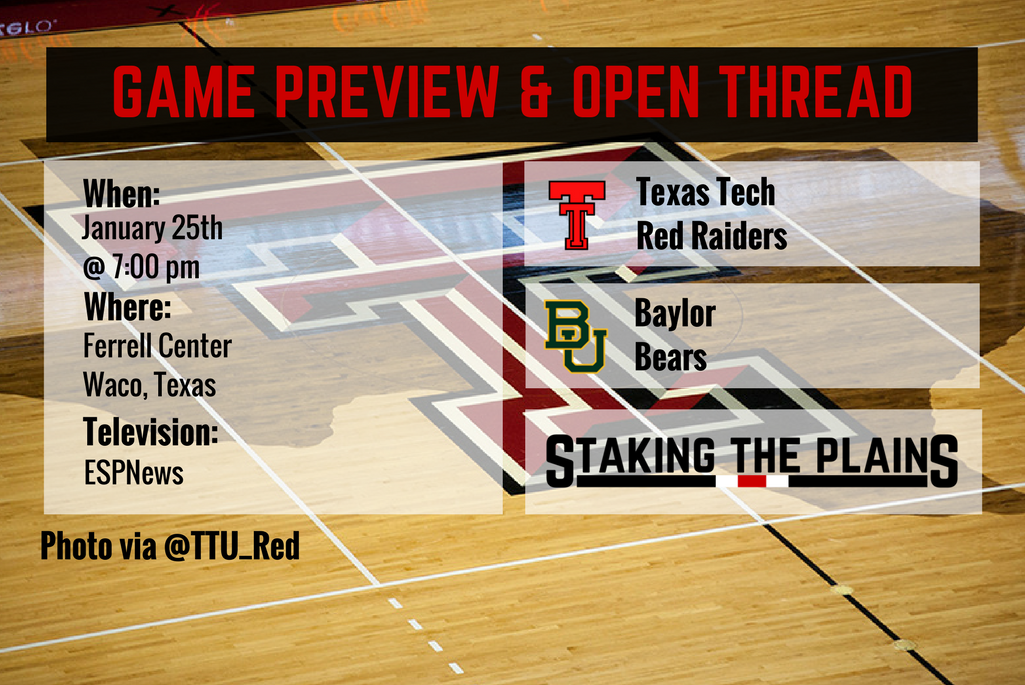 The Red Raiders travel to Waco to take on one of the best teams in the Big 12.

2. Baylor represents one of those teams that Texas Tech is inevitably going to have issues with. They are incredibly long and athletic and they can score and they play championship level defense. It helps a ton that they are so good defensively at the rim. Lual-Acuil averages nearly 3 blocks a game and Motley is a beast on the boards as well. In fact, Baylor has 235 offensive boards compared to 176 for Texas Tech. Keeping Baylor off the offensive glass may be one of those main priorities as well as stopping Lecomte and Freeman off the three-point line.

3. Texas Tech has really got to re-group and I think it has to start defensively, but that also means that certain players don’t get to see the floor too much. If Livingston isn’t hitting, then he’s a liability on defense as is Ross. These two should never ben on the floor at the same time. Without their offensive input, they are liabilities on the floor because they just don’t play great defense. I’d almost rather get killed on the boards and run Smith at the post with Stevenson and Gray at the forwards. Against Baylor, this might be disastrous, but it also might draw out the big Baylor forwards.

4. The other thing that I think would be really beneficial would be to slow the game down, but in order to do that, Texas Tech is going to have to be absolutely incredible on the defensive side as the ball and very efficient offensively. Texas Tech is in a bit of a tough place as Baylor is just right behind Kansas in terms of being at the top of the Big 12. Kansas has better guards, but Baylor has better bigs. Guards usually win in college basketball, but that’s a conversation for a different day. Texas Tech needs to rip off some wins after this Baylor game (I’d like to win, but winning on the road is a problem for this team) as LSU, Texas and Oklahoma are all next. Those are all winnable games.

“We have some guys on our team that are great guys,” Texas Tech head coach Chris Beard said. “Sometimes in the competition, the heat at this level, we need a little bit more grit. I’m looking for some of these nice guys we have to find another level of competitiveness. It’s not about having that fire all the time, it’s about getting ready to play. Some of toughest, most competitive people I’ve ever been around, are not flashy, show people. There’s different ways to compete. Some of the toughest guys I know don’t talk a lot, some don’t have a lot of flash. We have some guys that have to individually figure out how to get themselves ready to play every night. I think that’s where we are as a program right now. We’re 3-3 – win one, lose one. Until you get to that level that each game is a big game on your schedule, and until they really grasp and believe it and understand it, it’s difficult to take the next step.”