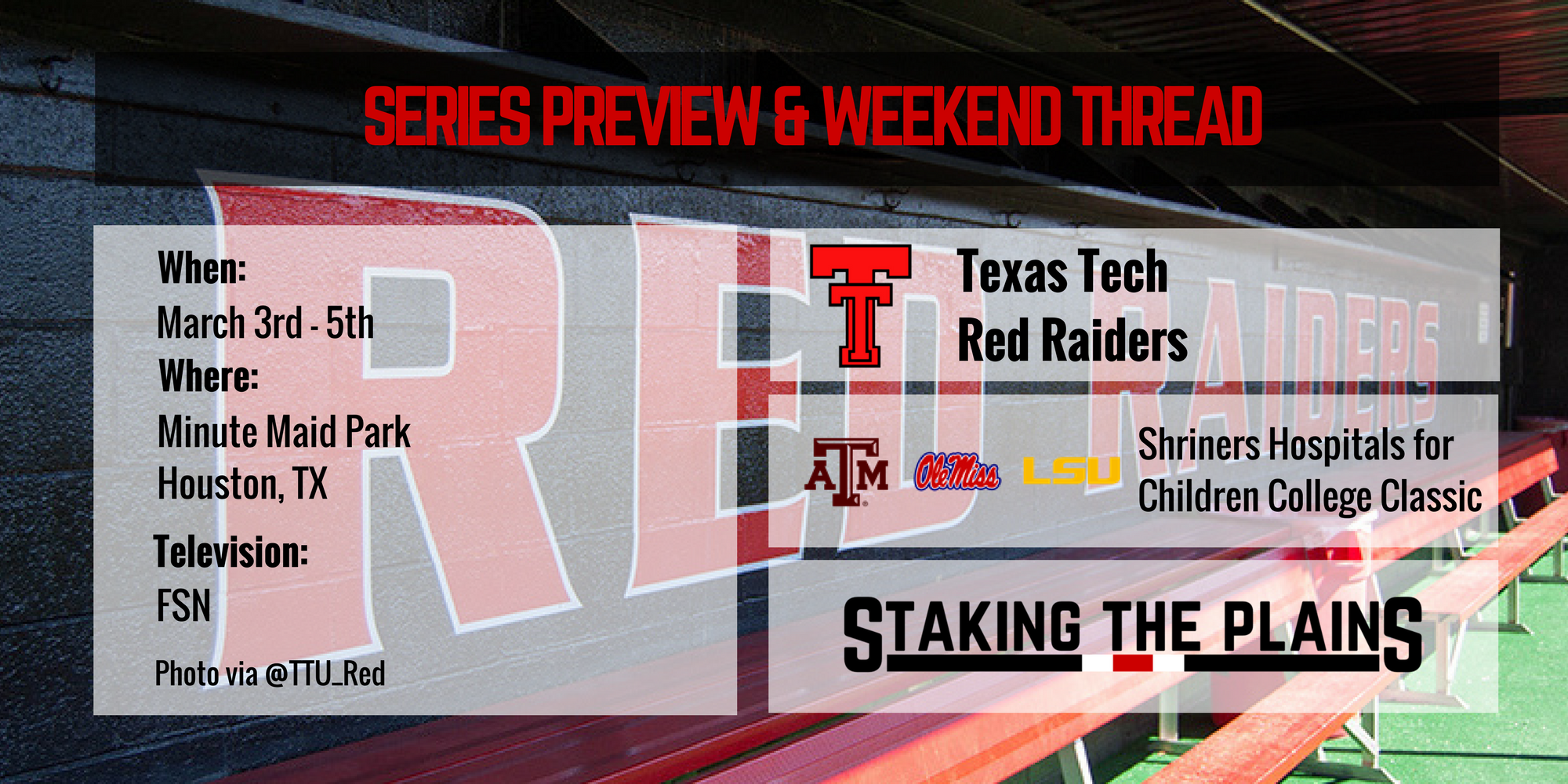 The Red Raiders head to Houston to take on the SEC in the Shriners Hospitals for Children College Classic.

Baseball America’s Teddy Cahill previews the series and this is essentially a Big 12 vs. SEC classic, where TCU and Baylor are also playing the other three SEC teams.

Davis Martin went 3.1 innings allowing 8 hits, 5 runs, walking nine and striking out 3. It was Martin’s first loss of the year. The bullpen struggled as well, Dylan Dusek finished the 4th inning, but he allowed 2 additional runs while Jake McDonald allowed two runs in 1.2 innings. Caleb Killian gave Texas Tech the final 2 clean innings. The offense struggled to do much of anything, getting only 3 hits, only 1 for extra bases, a Ryan Long double.

Steven Gingery pitched a gem of a game, going 8 innings and allowing just 5 hits, 1 run, 2 walks and striking out 8.Jose Quezada pitched the final frame (was a non-save situation) and allowed 2 hits while recording the final 3 outs. Tanner Gardner was 2 for 4 with 4 RBI. Josh Jung went 2 for 3 to help set the table for Gardner and Hunter Hargrove also went 1 for 4, scoring 2 runs.

Ryan Shetter had a quality start, going 5 innings and allowing just 3 hits, 1 run, walking 1 and striking out 3. Jacob Patterson came in relief and went 1.2 innings, allowing 3 hits, and 2 runs, while Parker Mushinski went 2 inning, allowing 2 hits, 4 walks, 2 hits, striking out 1 and a run, that run allowed LSU to tie it up in the 9th inning. John McMillon got the final out to the game allowing that Texas Tech comeback. Connor Beck broke out in a good way, going 3 for 4. Tanner Gardner had the walk-off hit in the bottom of the 9th, a single off the pitcher’s foot, and went 2 for 5 on the day. Josh Jung, Huter Hargrove, Orlando Garcia, Ryan Long, Clay Koelzer and Brian Klein all had hits