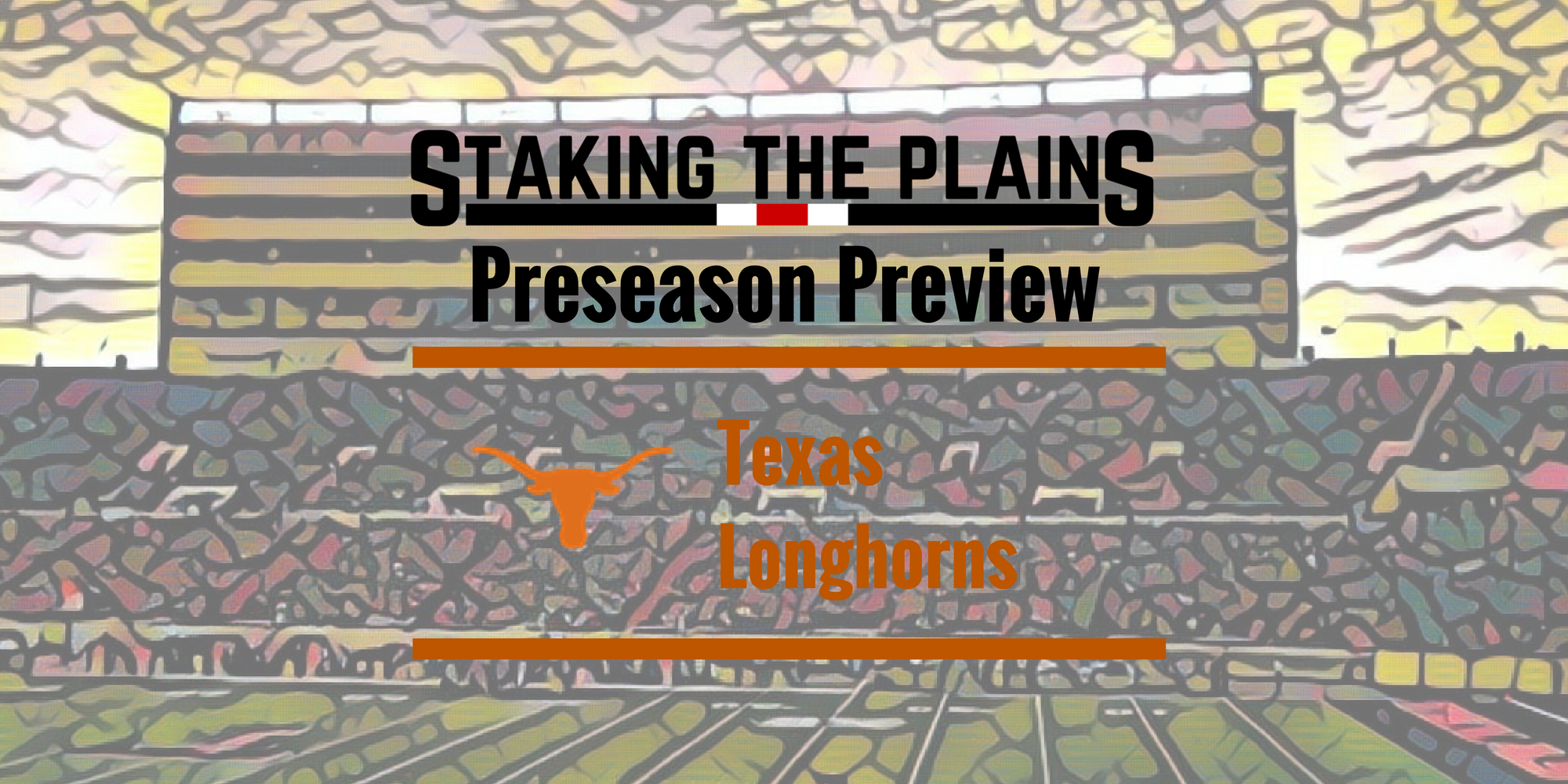 Will Tom Herman have righted the ship by the last game of the year?

An early season win against Notre Dame was a knee jerk and many pundit declared that Texas was back, but that game maybe ended up being the best game of the season for Texas. Texas would go on to beat UTEP handily, but then dropped their next three games, at California, at Oklahoma State and against Oklahoma. That streak was broken with a win against Iowa State and then Kansas State (as they always seem to do), notches a win in Manhattan, with wins against Baylor and at Texas Tech gets the Longhorns to 5 wins. The last three games were losses to West Virginia, Kansas and TCU. Of Texas’ 7 losses, 5 of them were by a touchdown or less. They were close in a lot of them, but simply couldn’t close it out.

Williams is the all-world offensive tackle from Coppell that will star for the Longhorns this fall. I’m not into the draft stuff this early (and I’m barely into it into the spring unless there’s a Texas Tech player involved) but Williams is projected to be a first round pick. He’s going to be great on the left side an he’ll shut down pretty much any pass rush and he’ll also do a helluva job in the run game. In fact, I think that Williams will probably shine in that respect so long as Herman runs the danged ball (which I think he will).

Ford had 54 tackles last year, including 5.5 tackles for a loss. I always really liked the way that Ford played, but this was a young defense overall last year (hence the reason 10 of 11 starters return). Breckyn Hager was the guy that got the most stats last year with 13.5 tackles for a loss, but I wasn’t really that impressed with Hager’s game. Regardless, Texas returns everyone and they’re all pretty young overall and Ford is an important cog to that defense.

With Jefferson, there’s been hype surrounding Jefferson’s play on the field for quite some time, but he hasn’t burst on the scene like some expected. Jefferson had 62 tackles, with 8.5 tackles for a loss, 5.5 sacks, 3 passes broken up, 3 quarterback hurries and a forced fumble. That’s really productive and I’d take that in a heartbeat, but I think the expectations are higher. There was also this report that I sort of remember seeing passed around where Herman and Jefferson (and his family) met with Herman. I think it was on the excellent InsideTexas site, but I couldn’t find it so I could just be imagining it. Anyway, I don’t know if that’s normal and I for sure don’t know if it’s a big deal (if what I’m remembering is true), just something to watch. Personally, I think Jefferson will be just fine and have an excellent season.

The biggest reason for optimism is the defense. They’re all pretty young and they all had an excellent pedigree. Defensive coordinator Todd Orlando has typically done an excellent job of doing a lot more with a lot less. Orlando now has a very young and I think very hungry defense to work with and I think that this group will show improvement. They struggled last year, particularly in the defensive passing game.

If you would have asked if Texas had a top 50 offense I would have emphatically told you no. Texas had a top 30 offense, but the problem with that offense last year was that it was inconsistent at time and that’s going to happen with a freshman quarterback like Shane Buechele. Buechele threw for nearly 3,00 yards with 21 touchdowns and 11 interceptions. A lot of Texas fans are already looking to Sam Ehlinger to unseat Buechele, but I’d probably stick with Buechele because that learning curve ain’t no joke. The good thing for the offense is that they return Chris Warren, who should be ready to go for the fall (I think) and Herman recruited two very talented freshman running backs in Toniel Carter from Langham Creek and Daniel Young from Westfield. Pretty much the entire receiving corps returns and they put up decent numbers, but there wasn’t a standout receiver, a stud. I don’t know who I expect that to be, but it would seem that if they had a “dude” then that Texas offense would be just that much better. The only caveat to the offense is the hire of Tim Beck at offensive coordinator. Some Ohio State fans were very much ready to be rid of Beck, but Beck and Herman obviously go back to Herman’s time at tOSU. I can’t claim to know enough as to what those problems are, but I’d expect Herman to have a pretty heavy hand in the offense, so those concerns may not be warranted.

It’s always so tough to predict this game, the last game of the year because so much will happen between now and then. The seasons will have pretty much written themselves by this point and most likely, Texas and Texas Tech will be completely different teams than what was expected. I think Herman is a heck of a coach and he’ll do well. I go back to the fact that both Texas and Texas Tech lost their share of relatively close games and having a sophomore quarterback that’s had a lot of snaps will help with that.