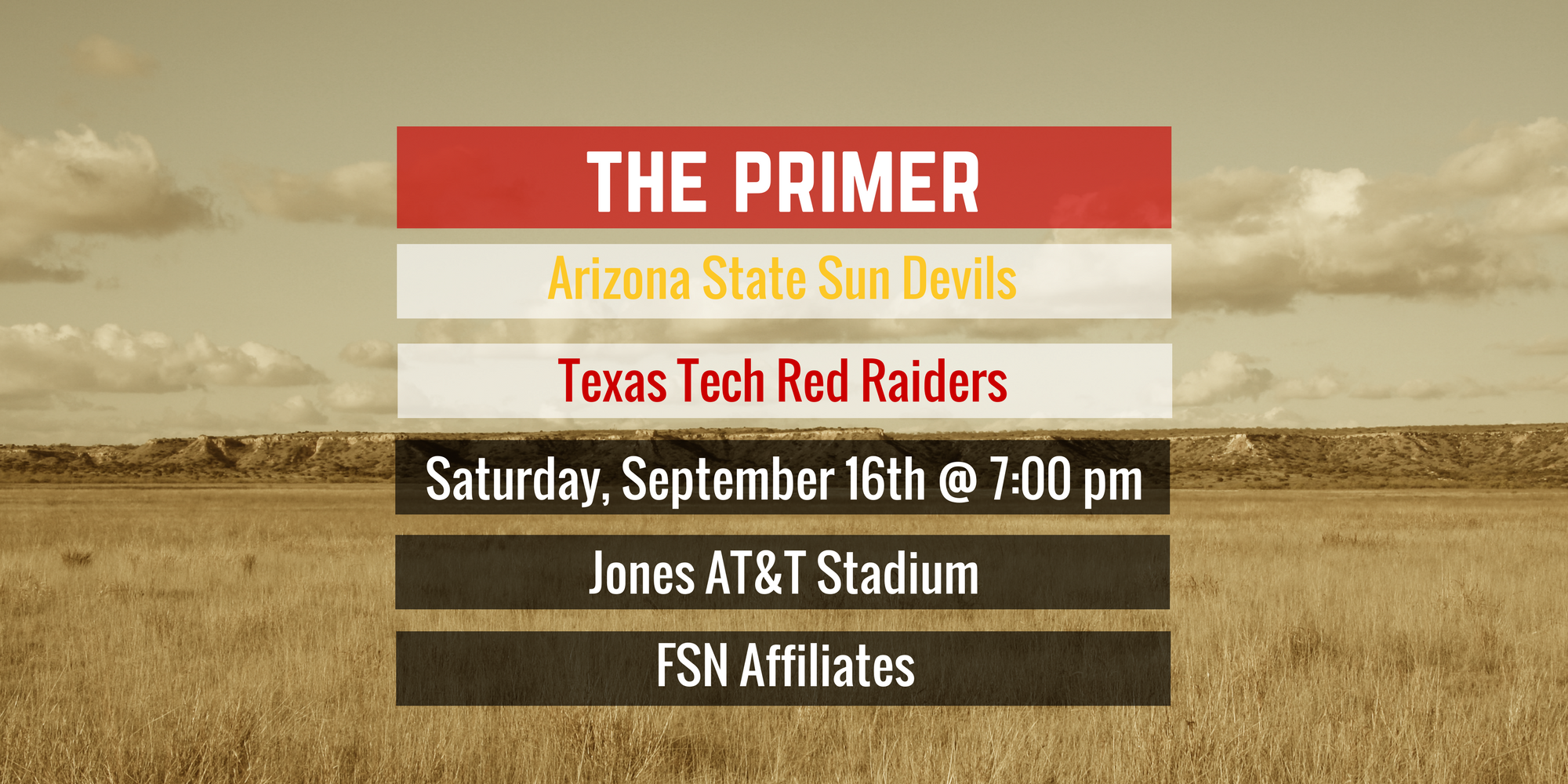 Let’s get to know the Arizona State Sun Devils, Texas Tech’s 2nd opponent of the year.

For Texas Tech, they come off of a bye week after taking care of business against Eastern Washington, 56-10. And the game against EWU was one where you hopefully draw some conclusions about how maybe Texas Tech was a bit underappreciated as a result of some very solid play defense against what has been a very good offense at EWU and holding EWU to just 10 points, something that hasn’t happened in a long time. I do think that EWU was a bit over-hyped in a sense. A lot of what was thought about EWU was based off of what they were last year and losing those four receivers were a pretty big deal. Those guys were good and the receivers didn’t really make plays for EWU. On defense, it was the big plays that made such a big difference for the Texas Tech offense and that ultimately broke the back of EWU, along with the bruising running game.

That’s not to say that there aren’t things that were positives to take from the game. There were plenty and we’ve talked about them this past week and I do think you should believe, to an extent, that things aren’t as gloom and doom as the national media thinks. One thing that should bother you is that Eastern Washington lost to North Dakota State 40-13, at home. NDSU is the #2 team in the FCS rankings, but the Eagles were dominated on both sides of the ball, only managing 134 yards in the air and 70 on the ground. EWU may be a terrible team.

As far as Arizona State, they struggled with New Mexico State, winning only 37-31. Manny Watkins threw for 300 yards, but the offense managed less than 100 yards on the ground. And maybe more surprising is that Arizona State allowed nearly 400 yards passing and 150 yards on the ground to the NMSU Aggies. Don’t forget that Phil Bennett is the defensive coordinator at Arizona State so it will be interesting to see how he progresses this year. And on Saturday, Arizona State lost to San Diego State pretty convincingly, 30-20 — at home. It wasn’t the quarterback this time that racked up those yards against ASU, but it was 281 yards on the ground on 42 carries that did the trick. Ballage only ran for 44 yards on 15 carries and Wilkins was efficient, 20 of 33 for 298 and 2 touchdowns, but he appeared ot be the best thing about Arizona State on Saturday night.

Need a t-shirt, mug, notebook, or how about a zipper pouch? Click and support Staking The Plains.

This is a proving game for Texas Tech, one where the stench of last year still wafts. 68 points, 350 yards in the air and 300 yards on the ground, to an Arizona State offense that wasn’t near as good as this result for the rest of the year.

For Arizona State, they’re so similar to Texas Tech, they know that they have to play better than they did against New Mexico State and San Diego State. Both of their games were at home and this will be Arizona State’s first road test of the year.

What to Know About Arizona State

Arizona State runs a standard spread offense with new offensive coordinator Billy Napier, 4 receivers with a fullback that probably plays on occasion and a single running back. The key here is that Arizona State’s Y-receiver is in the 6’4″/250 range, so they’re essentially a tight end for all intents and purposes, but labeled a Y-receiver. Kalen Ballage is the guy that haunts your dreams, but Demario Richard is the co-starter. Manny Wilkins continues to start over Alabama transfer Blake Barnett as he should, he hasn’t been the problem.

Ballage is the main running back, despite being an “or” with fellow senior Dmario Richard wh ohas only had 1 rushing attempt. The only other real running threat is Wilkins as no other runner has more than 4 carries, and that’s Eno Benjamin, who has 3 yards on 4 rushing attempts.

Bennett runs a standard 4-2-5 with the rush end similar to Tony Jones, a 6’3″/225 linebacker or rush end.The other defensive end is around the 250 range. The two linebackers are Christian Sam and DJ Calhoun with a hybrid linebacker/safety in J’Marcus Rhodes, who goes 6-1/214. Arizona State runs a boundary and field corner set with Joey Bryant at the boundary and Kobe Williams at the field corner spots. Starting safety Marcus Ball has retired from football as he suffered from uncontrollable seizures that would occur on the field. Oh, and from last year, other starting safety Armand Perry retired and starting cornerback Kareem Orr transferred to Tennessee-Chattanooga.

Linebacker Koron Crump is the leading sacker at 4 and fellow linebacker Alani Latu has 2.5 along with defensive lineman Tashon Smallwood. Linebacker DJ Calhoun leads the team with 21 tackles and the highlighted Sam is second with 15.

Via OddsShark, Texas Tech opened as a 7 point favorite. That’s a bit of a surprise, but Arizona State is already 0-2 against the spread this early in the season, under-performing against New Mexico State and San Diego State.