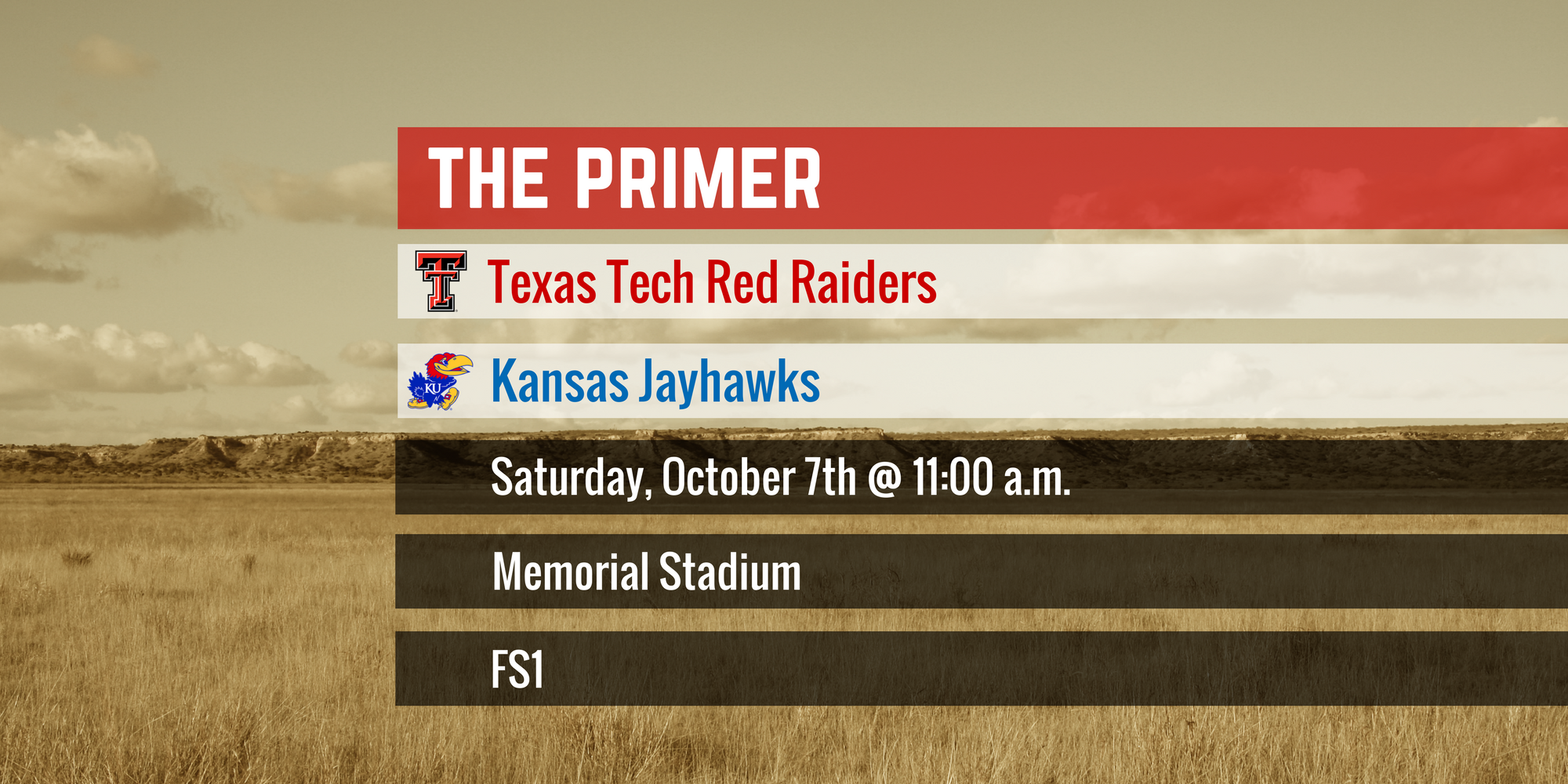 Your early look at the Kansas Jayhawks.

Kansas had a bye this past week, which may not bode too terribly well for Texas Tech. Kansas won their first game of the year, beating SE Missouri State, and then losing their next three to Central Michigan, at Ohio and West Virginia. The losses to Central Michigan and Ohio weren’t great from the standpoint that they managed 27 and 30 points (which is fine) but gave up 45 and 42 points in both those games. There was also this idea that the performance against West Virginia at home was good because they kept pace with the Mountaineers in some respects, but still lost by 22.

Of all things, according to Football Study Hall this game against Kansas is the Jayhawk’s best chance of winning a game at 25%.

Texas Tech is coming off of their first loss of the year to Oklahoma State. As head coach Kliff Kingsbury said after the loss, e’re about to find out what this team is made uf and how they react to losing a game. Texas Tech really has to bounce back for this game, and despite it being on the road, the Red Raiders really need to make a statement in this game.

For Kansas, I wrote last week that the Jayhawks’ best chance at a remaining in is against Texas Tech. Let that sink in for a second. The Jayhawks are struggling with losses to Central Michigan and Ohio, the key for Texas Tech, will be getting the offense on track and being efficient offensively.

What to Know About Kansas

The offense is really led by running back Khalil Herbert, who is averaging more than 100 yards a game. It’s important to remember that Doug Meacham is the offensive coordinator for Kansas this year, a definite move in some direction for Meacham, who was previously at TCU with Sonny Cumbie. the quarterback is JUCO transfer Peyton Bender (6-1/190) and he’s taken all of the snaps thus far and he’s been okay, completing 57% of his passes for 1,227 yards, 7 touchdowns and 7 interceptions. I would think that if Bender has a break-out game, that’s going to be problematic. He’s good enough to where he can catch fire, but hasn’t yet.

As referenced, Dineen and Armstrong are your best playrs and the play of Dineen is actually surprising and significant. Everyone thought that Armstrong was the best player on the team, but Dineen has been spectacular. DT Daniel Wise (6-3/290) is very good as well, registering 15 tackles, 6 tackles for a loss and 7 run stuffs and I think that Armstrong and Wise are the best guys on the line. Figure out a way to neutralize them and you can do some things. Lots of things. LB Osaze Ogbebor (6-1/220) is the other primary linebacker, although Keith Loneker, Jr. (6-2/225) and Kyron Johnson (6-1/210) get some burn as well, but aren’t significant contributors.

Via OddsShark, the line opened with Texas Tech as 14.5 point favorites and that line has moved to 15, 16 and 17 as Sunday progressed. I think the 17 is a bit heavy and am more comfortable with the 14.5, but we’ll see where the line settles by game time.