How do Iowa State and Texas Tech match up? 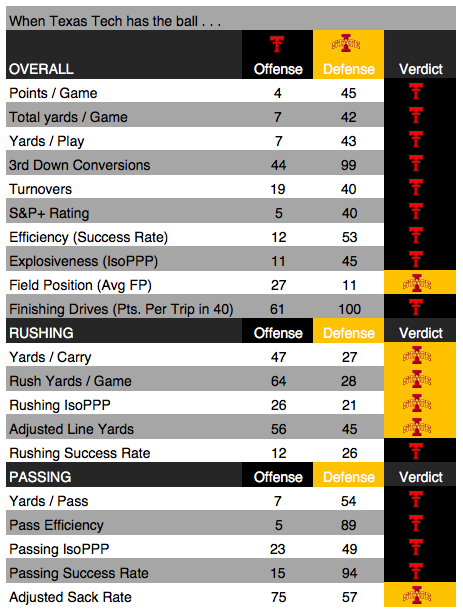 These stats are brought to you by the incredible folks at Football Study Hall and CFBStats.

Iowa State and Texas Tech are incredibly similar in a lot of ways. Texas Tech has the better offense, but the defenses are darn near mirrors of each other. Both defense are terrific at stopping the run and that’s really a huge surprise for me. I had no idea that Iowa State was as good against the run as they are.

As you’ll note, Texas Tech is still pretty danged elite on offense, but it’s been finishing drives that have been the biggest problem for the Texas Tech offense. The good thing here is that Iowa State isn’t really good at stopping those drives, so maybe Texas Tech gets back some of that mojo.

I think this is the first time this year that an opponent has had such an advantage in terms of running the ball, although it’s close in a handful of categories. This should still be the best battle, whether or not the Texas Tech offense can continue their running success against a very quality defense.

In terms of passing the ball, Iowa State is very solid, but there should be plenty of opportunity to down the field on the Cyclones.

When Iowa State Has the Ball 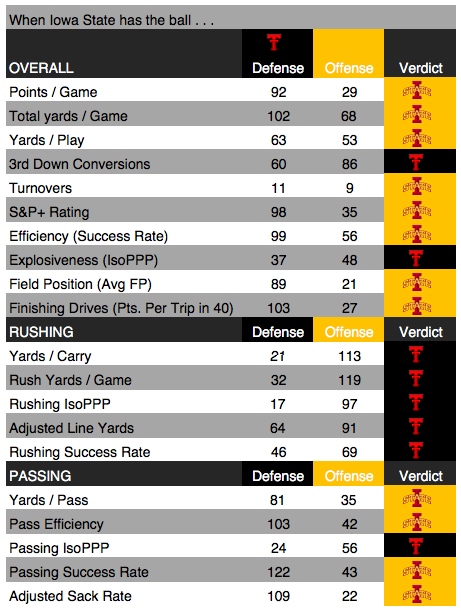 Looking at the traditional numbers, Texas Tech isn’t doing all that great, but digging a bit deeper, Texas Tech is okay. Except for last week where it seemed there were a ton of big plays late, but this team dominates in turnovers and stopping big plays. The turnover item is pretty significant because ISU simply does not turn the ball over and Texas Tech has had turnovers in waves.

And look at that Texas Tech defense just stand out in both traditional and advanced stats for stopping the run. I’m surprised that ISU isn’t very good at running the ball as that’s been their identity for such a long time.

And in terms of stopping the pass, it’s not pretty for Texas Tech. Again, they normally don’t allow big plays, but it is all of the plays in-between that are a problem. Iowa State is more than competent to throw the ball and they do a significantly better job at protecting their quarterback than Texas Tech is at protecting theirs.