Your preview of the Sooners and Texas Tech. 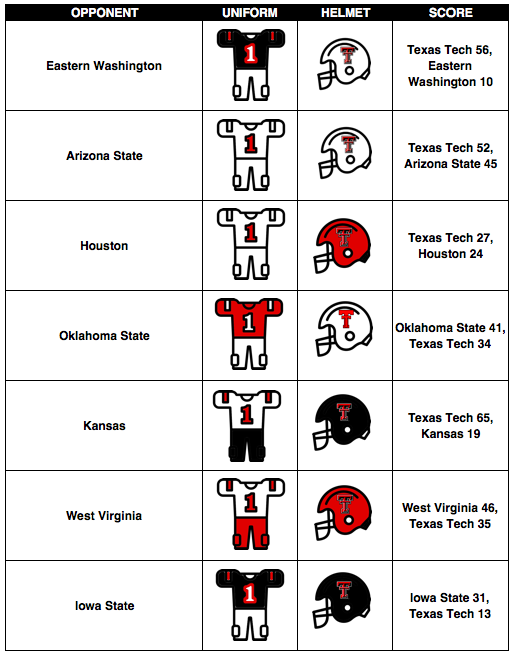 This is the part of the season where it can be really difficult to write the “Big Storyline”. If I try to be hopeful, I think the response of, “Oh, there’s that Seth, being way too positive on things, let’s just skip this part.” And then there’s the other side where if I write about coaching changes or how this game seems insurmountable then the, “Oh, there’s Seth being all negative again, I’ll just skip this part.” Both are probably true because I do try to balance it out a bit. I understand that there are factions out there, both of those factions I believe are absolutely part of this community and I wouldn’t have it any other way.

And if you’re looking at the Sooner end of things, it’s been since Tulane that the Sooners have just blown the opposing team out of the water. The Sooners won by 8 at Baylor, then lost by 7 to Iowa State at home, then beat Texas by 5 and then beat Kansas State by 7 last week in Manhattan. A win is a win. There’s no doubt about that, but you would have thought that the Sooners would have been much better. In fact, against the spread this year, Oklahoma is 3-4, 2-1 at home ATS and 1-3 on the road ATS. The best part about the Sooners thus far (Iowa State aside) is how they’ve been able to close games. Yeah, that means the Sooners are having to come back, but they are doing it and that’s not an easy thing to do.

That first play is a doozy and makes you think what could be if Texas Tech can get some decent inside blocking.

Mayfield is really good at finding things over the tp and over the middle. He’s not afraid to take chances and he’ll trust his receivers to make plays even to his detriment. Most of the time they work out.

(That Kansas State quarterback struggles in the passing game).

Don’t underestimate the athlete that Mayfield can be. He makes a lot of plays with his feet.

And those two touchdowns catches are by Dimitri Flowers, one of the more underrated and probably underutilized players for the Sooners. He’ll get you a touchdown.

(Just as an FYI as that snap sails past the punter, OU is 96th in special teams S&P, unfortunately Texas Tech is 125th in the same category, much of that is because of the kicking.)

Have to wrap up those Sooner running backs. That’s a must.

Mafield again trusting his receivers to make plays. One on one, let’s give it a go.

Again, have to wrap up those Sooner runners, if they break free, they’ll go for huge yards.

That aggressive Oklahoma defense could be a boom or a bust for Texas Tech.

Another week where a PDF or transcript of the coach press conference is unavailable.

I’m sticking with my prediction of 38-21 despite logic telling me otherwise. Don’t ask me how Texas Tech gets to 21. And based on how OU is playing teams this year, Texas Tech’s biggest hope is that if things stay close, then you never know. Teams tend to make mistakes and lose games rather than win games, but OU seems to be the exception to the concept of just losing games, but they do tend to keep things close, especially as of late.