A statistical preview of Baylor vs. Texas Tech. 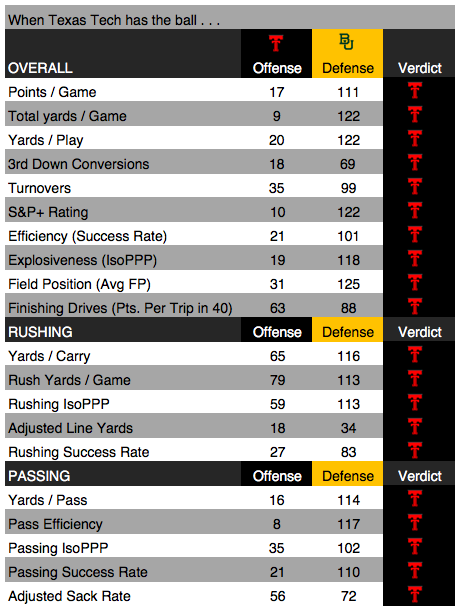 Much thanks to Football Study Hall and CFBStats for all of the statistical data.

I’ll tell you that I got a bit cross-eyed while trying to do this earlier in the week and I’m almost positive that I’ve messed up somewhere, but I think for the most part, Texas Tech owns a statistical advantage on the offensive side of the ball on just about every category (and no, these categories have not changed in quite some time).

I think what we could gleam from this is that Bayloor is somewhat of a down-and-out defense for the most part. The best part about the defense is the adjusted line yards and rushing success rate, which speaks to Baylor’s ability to stop the run. Also of note is Baylor’s ability to stop opponents on third down, that’s in the back half of the nation in terms of the rank, but near that top half.

I think Baylor also does a decent job of getting to the passer and I’d be $100 STP Bucks that if Texas Tech goes to 00 personnel that Baylor will blitz the heck out of Shimonek.

When Baylor Has the Ball 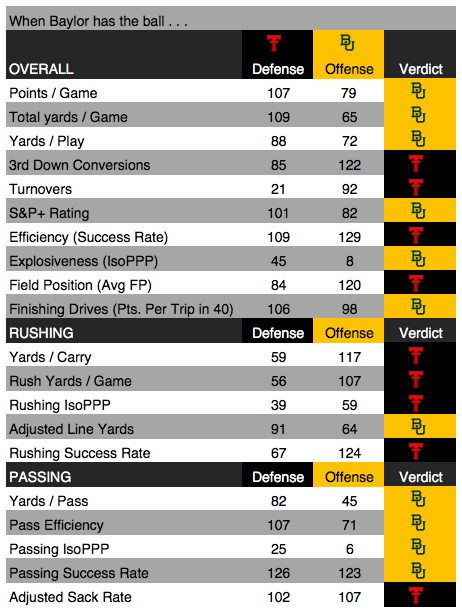 It’s tough to tell with the Baylor offense, particularly because they’ve had three starting quarterbacks and I definitely think that consistency has affected things. Charlie Brewer is just a true freshman and it would have been tough for him to come in right away and start. But he will most likely be the guy moving forward.

Baylor is best at big plays, thanks in large part to the receiver, Mims, but that’s also one of those things that David Gibbs has been able to avoid.

Baylor also does a decent job of running the ball and now that they return a full compliment of running backs, that’s probably much easier on them. What I’m guessing is that they are the college equivilent of Justin Stockton, sometimes you get nothing and somethings you’ll get a pretty big play.