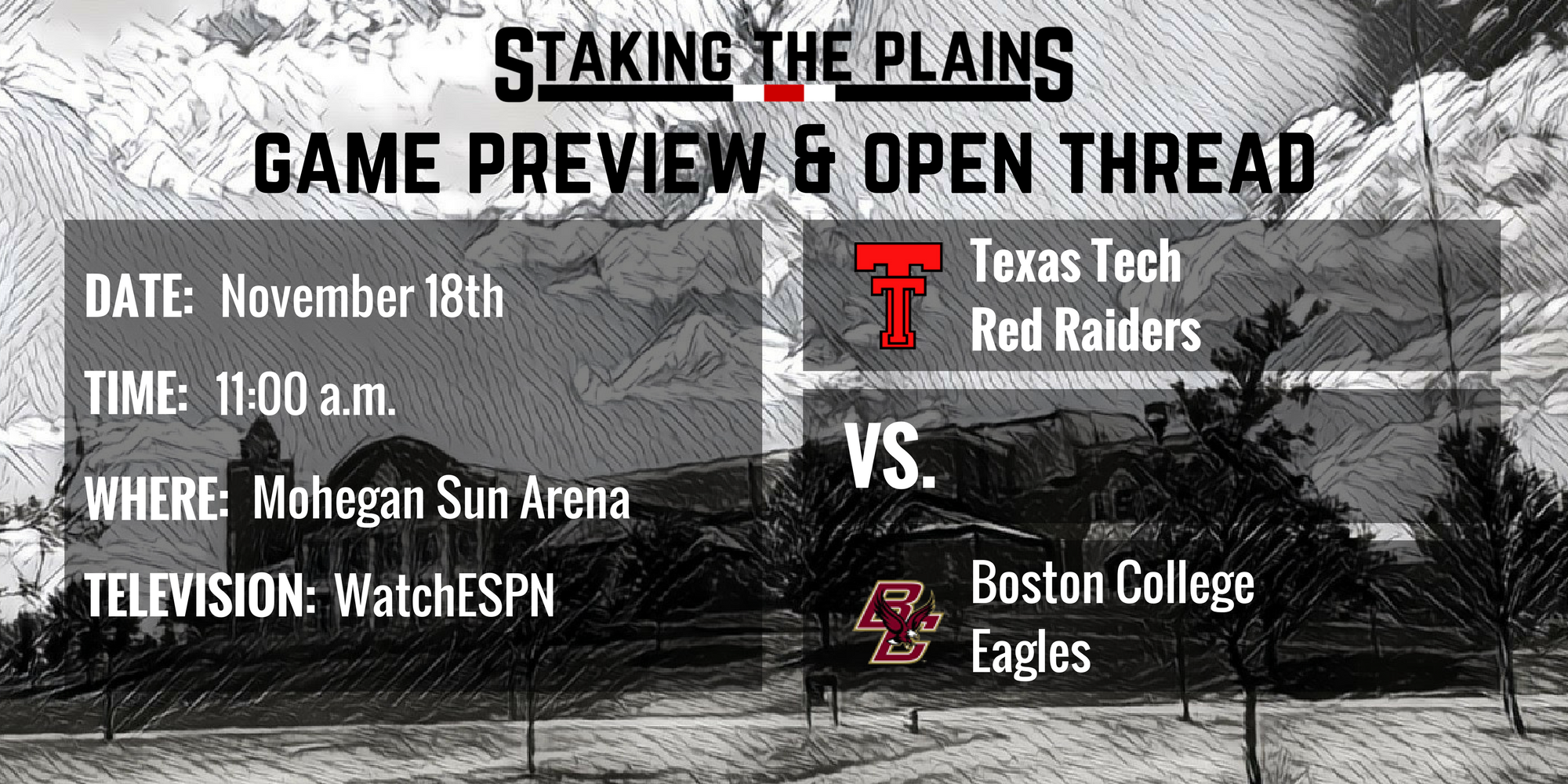 1. KenPom has Bostom College as the 90th best team in the nation, 98th in AdjO and 96th in AdjD. Meanwhile, your guys in the red and black are up to 30th in the nation, with an AdjO of 47th and an AdjD of 26th in the nation. That’s some pretty salty defense, but I also think that the two opponents for Texas Tech aren’t anything to write home about.

2. One of my favorite things to do is to look at heights and weights, especially on a basketball lineup, and get a general feeling for the team. I loved doing that as a kid and it’s why I still do it now. Boston College has some real size, 5 players in their two-deep who are over 6’8″ and 3 are 6’10” or bigger. This will be something different than what we’ve seen thus far this year.

3. Raise your hand if you’re ready for Zach Smith to make his presence known? Me too. Smith has been quiet on the offensive side of the ball, but he’s played the most minutes. Maybe he’s intentionally deferring to those other opponents, but I’d love for him to look for his own shot.

4. I don’t think that Hamilton is ever going to be a great rebounder and if he averages 5 boards a night, that’s probably good. I still haven’t had the opportunity to watch him play, but those 5 boards are going to be pretty important as is that post defense. He simply cannot allow opponents to get those offensive boards. I honestly see this game as one where Texas Tech should cruise. The team has been there since Thursday evening and they had a full day to acclimate. The best thing about this lineup is that if anyone isn’t giving full effort, well, there’s a couple of dudes waiting in the wings. For Boston College, maybe their biggest threat is Mitchell, who comes off the bench and I’d guess that Hawkins and Mitchell play a ton of minutes together and they both rebound the heck out of the ball. Keep them away and I think this is a nice win for Texas Tech.

5. The official site has your official preview of the game:

“It’s a great opportunity for us for so many reasons with it being the first road trip of the season and playing a neutral site against some really good quality opponents,” Texas Tech head coach Chris Beard said. “Beginning with Boston College, who we have a lot of respect for, I think they’re really well coached. They’ve got three or four players on their roster that are worthy of All-ACC recognition and probably a couple of guys that will play at the next level.”

“Their backcourt is an All-ACC type backcourt,” Beard said of the Eagles. “A lot of experience there. And all three perimeter players can really score. Then their inside game is really improved with the grad transfer, who’s a guy that can score at all three levels: shooting, driving and posting. Their a good defensive team that plays multiple defense and they really rebound the ball well. … I’m excited to get the year started playing somebody this good.”