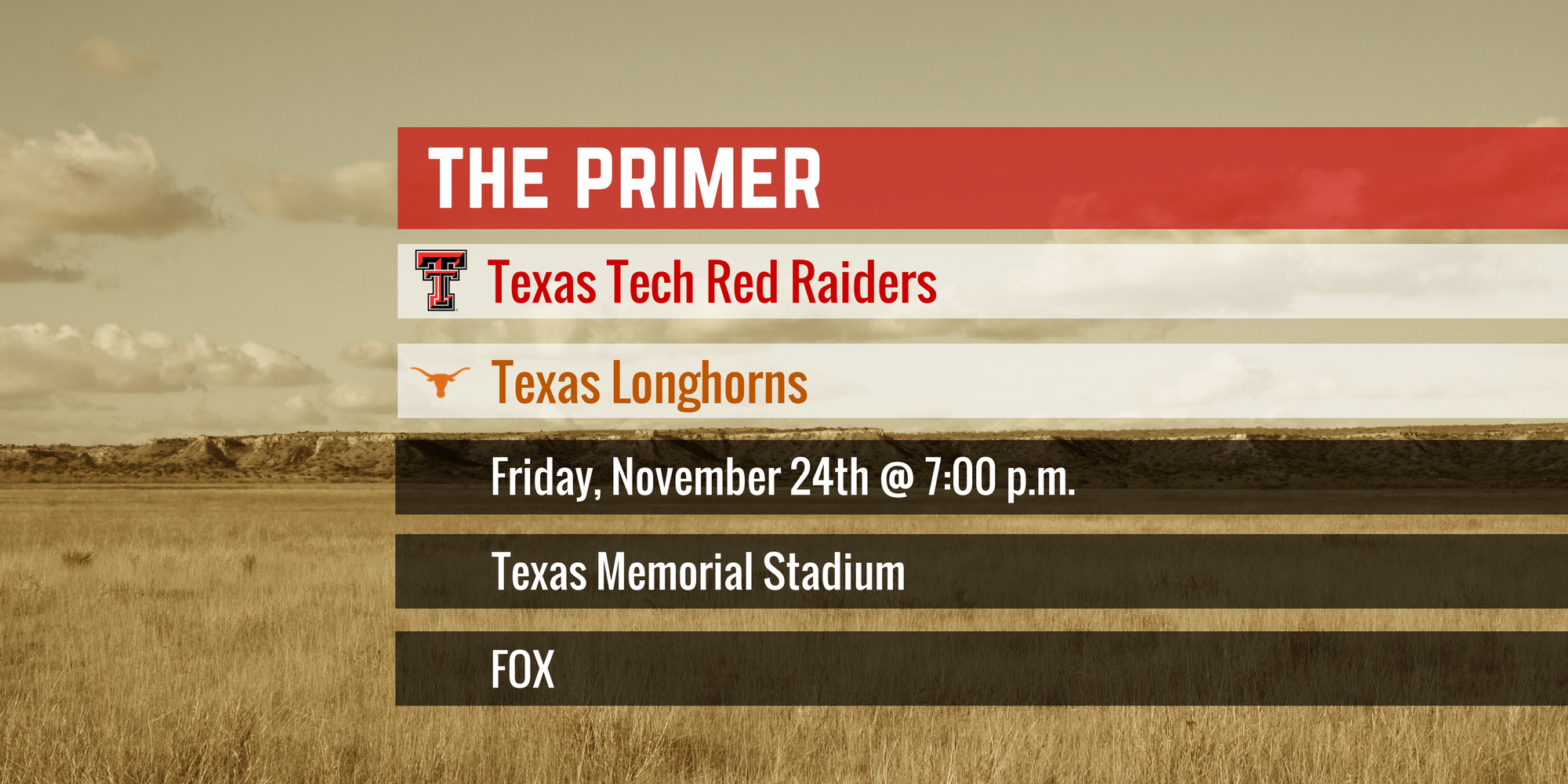 An early week preview of the Texas Longhorns.

Well, Texas got their 6th win of the year, beating ranked West Virginia and that’s a really big deal for the Longhorns to be bowl eligible. Texas knocked out Will Grier (I think he’s got a broken finger) and that seemed to sink a lot of what West Virginia wanted to do offensively, at the very least it made a significant difference.

Texas Tech missed out on getting bowl eligible themselves, losing to TCU in a less than stellar offensive performance. The defense played well as long as they could before they succumbed to the eventual result and a 24 point margin in losing to TCU.

This game may not be as important for Texas much longer, other than obviously wanting to just win yet another game. Another win means probably means a better bowl scenario.

Texas Tech is playing for an opportunity to go bowling, at 5-6 on the season, Texas Tech needs a final win to get bowl eligible. I honestly don’t know how fans would react to going to a bowl game in this type of season, but I have a pretty good idea of what would happen.

What to Know About Texas

The offensive is led by one of two quarterback, freshman Sam Ehlinger (6-2/230) is the better quarterback, I think, but had to take a break due to concussion issues and in came Shane Buechele (6-1/205) who has seemingly been a bit overlooked. Buechele completes passes at a higher rate, but Ehlinger has a higher yards per attempt. They both played against WVU, Ehlinger appeared to have played more snaps and was the better quarterback. You wonder if Buechele will stick around next year if this appears to be Ehlinger’s job.

With such young quarterbacks, the receivers aren’t getting a ton of burn. Maybe their best is Reggie Hemphill-Mapps (6-1/185) who has the best catch rate of the wideouts. That’s probably why he’s getting fed the ball (hint to the Texas Tech defense). Collin Johnson is huge target, but only catches about 55% of his passes and Lil’Jordan Humphrey (6-5/225) is another huge target and he has a better catch rate, 60%, but has only 1 touchdown on the year. None of the receivers appear to be burners, but that doesn’t mean that they can’t. Johnson is the closest at 15 yards per catch and Humphrey is at 12, while Hemphill-Mapps is at 10.

Malik Jefferson has gone quiet on social media and he’s played much better. Physically, there were few that could compare to Jefferson, and he’s finally put some pretty terrific play to go along with it. Fellow junior linebackers Anthony Wheeler (6-3/235) and Gary Johnson (6-1/220) are also playing really well. Just judging by their sizes, Johnson is probably a bit of a hybrid player.

The defensive line has been very good(they’ve played great against the run, but not a lot of splash plays). Poona Ford (6-0/305) plays inside while Malcolm Roach (6-4/270) is paired with Charles Omenihu (6-7/280) at defensive end. That’s some pretty good size along the line, but they don’t appear to play a ton of players along the line.

The defensive backfield was playing lights-out until Holton Hill was suspended for the year. Hill was a lockdown cornerback, but there’s plenty of guys there to supplement. Kris Boyd (6-0/200) and P.J. Locke III (6-0/205) are probably your starter cornerbacks, while Brandon Jones (6-1/205) and DeShon Elliott (6-2/210) are the Longhorn primary safeties.

Via OddsShark, the Longhorns opened as 11 point favorites and that eventually settled at 10.5 with a lot of books, so not a ton of movement on the line yesterday.