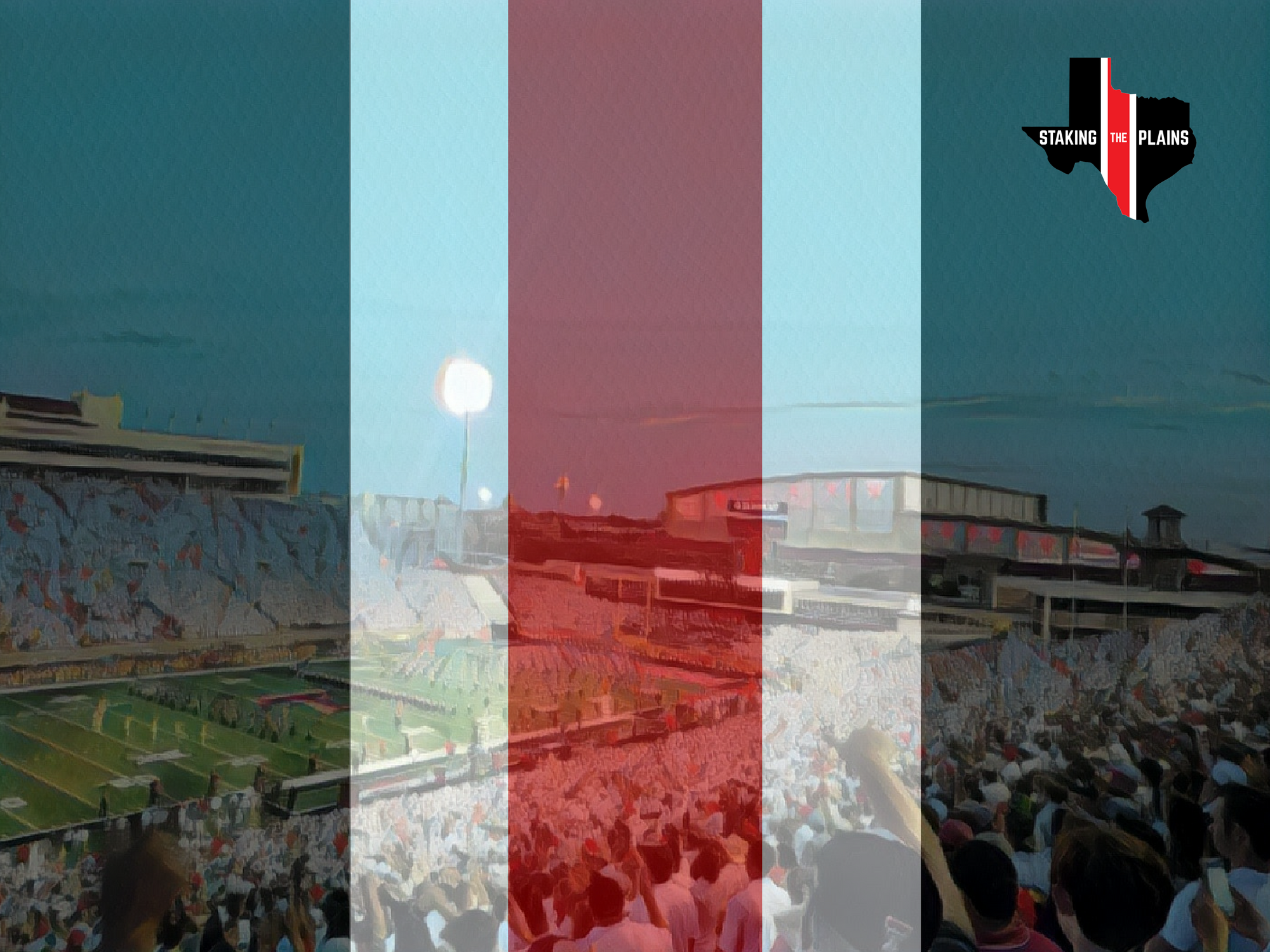 Coach Kliff Kingsbury, Coach David Gibbs and CB Desmon Smith were made available to the media on Monday.

The Texas Tech football team returns after spring break to start back up spring football. This is your non-transcript and there’s some good information here (took forever to non-transcribe because it seemed like Kingsbury and Gibbs were talking so fast).

It was good to get back out here after spring break, I felt like they had good energy, offensively, a bit sloppy at times, but it wasn’t a lack of effort, just have to come back on Thursday have a better practice and get ready for Saturday, which should be a fun day, that Midland deal has turned into an awesome event, and we’re excited to get back out there.

[Quarterback status] Still splitting the reps and trying to get better every day, the operation has been good for the most part. Decision making things of that nature come.

[Being at the 2nd round game in Dallas] It was incredible, I showed it in the team meeting, the Raider Power chant in the American Airlines, it was phenomenal to have what they call a neutral site and have that much energy and excitement and home crowd advantage was phenomenal and speaks to our fans it speaks to our fans and how amazing they are and was as fun an atmosphere as I’ve been around . . .

[Success of basketball team] No doubt, that’s good, that’s what you want, track is top 6 in the country, baseball is top 10 and basketball is doing their thing, it is great synergy for all of the athletic programs and it inspires our program to get to that level.

[Are the players excited about Sweet Sixteen run] They’re fired up, they all kind of run in the same circles, and friends with a bunch of those guys, and to see those guys have success like Keenan, Zach and Justin Gray, that have helped build that thing, it’s awesome and gives them hope to what we can build out here.

[Texas Tech basketball receiving national attention] Yeah, anytime your brand out out there on that national level, I’ve had so many people reach out to me, recruits reach out, national tv, it’s great for our entire university.

[Cooler weather in the morning] We came down here the sun came out a little later than it had been, but it was good work for us, to perform out here, throw and catch the ball in colder weather and we’re out here working in it.

[More what to expect from Midland scrimmage] The first scrimmage is big to learn from going full speed, when you’re tackling and taking to the ground that’s a big teaching point and then you expect to take off from there, we’ll get through Saturday, evaluate the film and see some improvements in the second half of football.

[Status of receiver] It’s good, it’s young, not as many bodies as we would have liked from attrition, Keke leaving and transfers, Zach Austin and Ja’Deion High, the depth isn’t there, but we signed a big class of receivers and have guys coming in, have na opportunity and they have to keep getting better.

[Any players in trouble over spring break, still not sure what “picture mails” are] I did not get any text messages or picture mails or anything like that, raise any flags, so that’s good, that’s what you hope for that you don’t get any of those.

[Status of Tre King] Tre King is still working through it, just being smart and that he feels healthy, we’ll take it day-by-day and see where that thing goes.

[Status of Paul Stawarz] He’s back, Paul is back, he served his deal, we’ve had other centers get good reps with the 1’s and have some other centers get some reps with the 1’s, we’re going to try to make him earn it back, it’s only right those other guys have been out for every practice executing the offense and he’ll get reps and get an opportunity to get his job back.

First 4 days, were good, 2 days in shorts, 2 times in pads, think we got better, took a week off for spring break, this practice is always a hard one, did a good job, had great energy, we didn’t have pads on, I think there is soem confidence in our team, again, go against each other, that’s easy to say, I like how they go about donig their job every day.

[How Dakota Allen has done] Dakota has done well, we’re trying to limit some of his reps so the younger guys can get reps, he’s a leader, he’s played a lot of football.

Honestly, because we’re so veteran, I’ve felt that way from day 1, we spent a lot of time coaching those kids, and getting them prepared for this spring, we haven’t had a whole lot of rust, we’ll just keep building and the competition is so high, it’s easy to coach because jobs are vying for playing time, so it makes your job easier.

[Status of Joe Wallace and Nick McCann] They’ve looked good, come Saturday, we’ll know a lot more, those guys have not played a lot of football, we’ve had Broderick play at the nose to cross train him as well.

[Status of cornerback] I like all of our guys, the two guys who redshirted, all of those guys are back, with Octavious and Des, just to be able to go out there, we’re rolling them, they’re going against our best receivers every day, it helps every day.

[Who is top of the depth chart at cornerback] Honestly, I’ve been pleased with the whole group, they have confidence about them, go against our office every day, but you should have good confidence every day, I’m not going to answer your question.

[Status of Quintin Yontz] Yes, Yontz can play either spot, plays hard with a high motor, we’re monitoring Eli with what he’s doing this spring, so you’ll see Yontz get a lot more reps, he’s a senior guy and look forward to watching him compete again.

[How the cornerbacks have fared] I really don’t, if you play DB in the Big 12, and you play against B12 wide receivers, you better work on yourself and work on your craft and your skillset, because you play against NFL guys every Saturday afternoon, we’ve got some NFL guys that you don’t know about yet.

[Status of Nelson Mbanasor] Nelson, big strong, physical kid and I probably said this before, my first 2 years here, he would have played, a third of the game out of necessity, we’re blessed enough to redshirt him, he’s bigger stronger more physical, he’ll be in the rotation and everyone will know his name soon. He can play end or tackle, he played some nose on scout scrimmages, but right now he’s an end or a tackle. He could have gone anywhere in the Big 12 and we’re fortunate to get him.

[The basketball team] They are inspiring us, they bring a culture that hasn’t been here for a while, we love it. We support them and everything they are doing and setting an example for us and we pick up where they left off.

[Biggest basketball fan on the team] T.J. or T.J. I think he told me had an offer from Tech to play basketball too, T.J. is an athlete, he’s real into them and keeps up with them.

[Playing in Midland] It’s amazing, not everybody gets to do it, being in West Texas still it makes everything easier, my family is 2 hours away, of course they’ll be at the one in Midland, it is an awesome experience to go home and play in front of all of the people who have watched me through the year.

[Who is coming to the game] I got four, my mom, my sister, my nana and my aunt.

[Legacy he wants to leave at Texas Tech] It definitely went by fast I’m going into my junior year already and setting an example for guys to follow, I want to leave my mark and if that is helping out one of the younger guys on doing it on the field, I just want to do my part.

[How defensive backs have improved] Aside from physically, mentally, we’ve improved a lot, we’ve spent a lot of time in the film room, learning new things, concepts, noticing things, where a receiver lines up on the field, just getting our football IQ up.

We’re looking everyday to improve, what did I do today to get better, what did I do that’s going to separate me? We do that as a team, every rep, every snap, everyone is going all out because everyone wants it so bad. Big 12 Championship is the goal and we’ll do whatever we can to get there.

[How he has improved with moving onto the next play] I definitely struggled with that a lot freshman year a lot, got better with it my sophomore year, I don’t see it phasing me at all. I love football, football is always going to do me good.