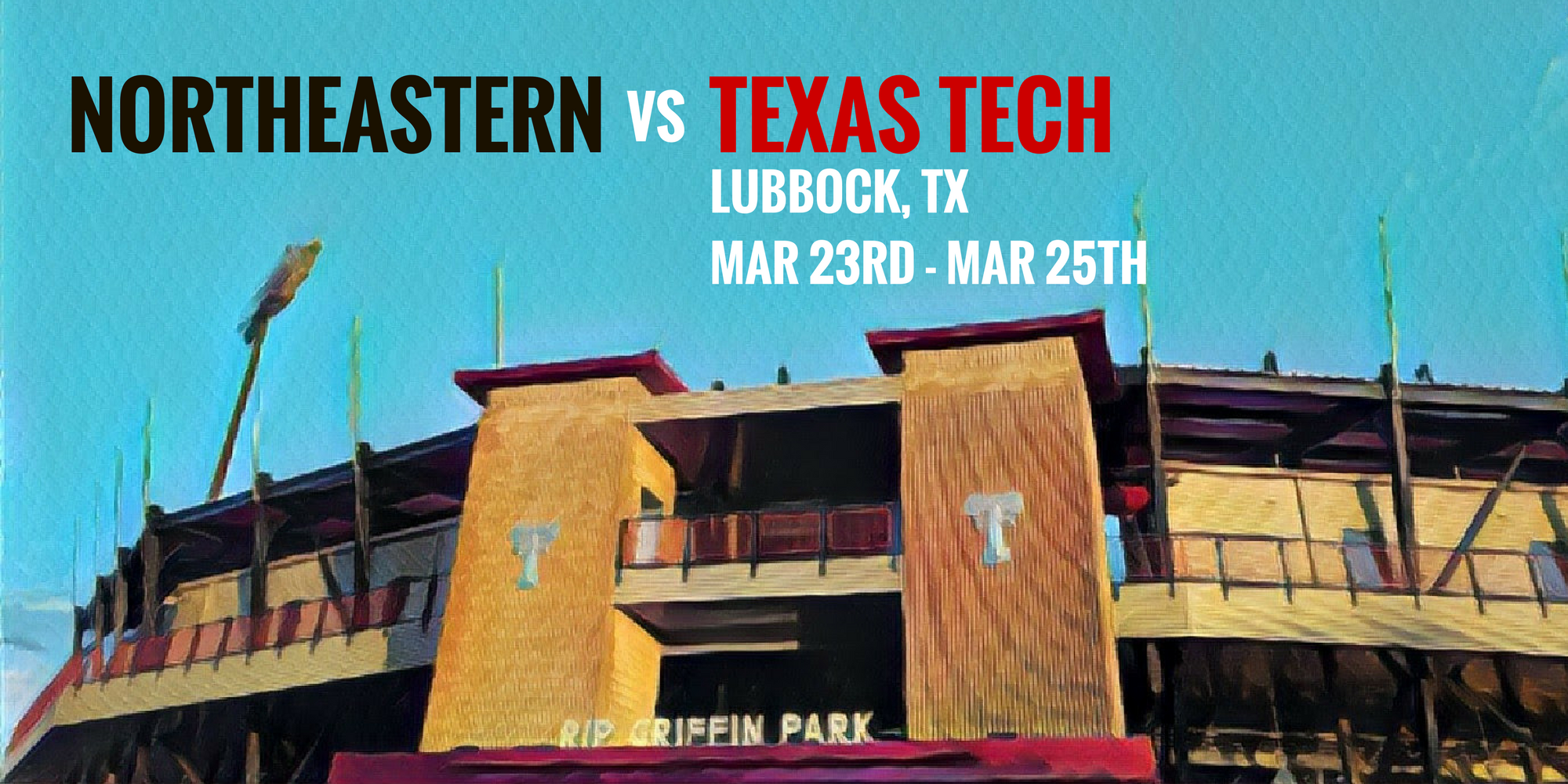 The Red Raiders host a four game series with the Huskies.

Hey! We’re back home and it seems like there’s nothing else going on this weekend, right? The Red Raiders are back at home after a lengthy road trip that saw this team go to Kentucky, then Louisville and this past weekend a series at Baylor. It’s been a while since this team has been at home. I think Tadlock, in the video below, indicated that it’s good to be home and that this team had too much time in the motel and his team just wasn’t moving around enough. I kinda get that, there’s so much downtime when you play that many games on the road.

Also note the starting pitchers we have for the weekend. I think this is Kilian’s first start of his career and we’ll see how he performs starting rather than coming out of the pen. You wonder how much the last game against Baylor will influence Tadlock. Freshman Cody Masters was in right field and batting near the bottom of the lineup. Zayne Willems got the start at catcher and Zach Rheams got the start at DH. Along with the usual suspects, this may be your best group of players moving forward, but we’ll see. I still wonder if Connor Beck can give you anything offensively, but if Masters steps up and is fully healthy, then maybe not. I just don’t know.

A-J Media’s Mike Graham, filling in for Carlos who is in Boston, writes about how this team isn’t taking anything for granted:

On one hand, his team still has a winning percentage of .706 and is at least in the top 11 in any given poll. But, on the other end of the spectrum, that trip Jung and the guys have been trying to forget has shown it’s not going to be a cakewalk to Omaha.

“I think we learned that baseball is a humbling game,” the sophomore third baseman said. “It doesn’t matter how good you look on paper. You have to come out every day. I think that’s the biggest thing we took away from this past weekend. We started off 14-0 and the other teams don’t care what your record is or who you’ve beaten.”

Via the official Northeastern site, the Huskies have had success playing against ranked teams:

Northeastern has already collected a victory against a ranked opponent this season, having kicked off its current three-game winning streak by handing No. 17 Auburn its first loss of the year, 2-1, on March 10 at Plainsman Park. With the win, the Huskies have now won at least one game during each of their last three multi-game series against NCBWA ranked competition. Prior to splitting its four-game, season-opening series against No. 30 Oklahoma during 2016, Northeastern had knocked off No. 15 College of Charleston during the Huskies’ 2015 Senior Week home stand at Friedman Diamond, which clinched NU its first top-three CAA regular-season finish since 2006 (bettered by Northeastern’s 2017 CAA regular-season championship).

I don’t know if it’s accurate to write that this game seemed kinda close through the first few innings, but when you score every inning except the 8th inning (and of course Texas Tech didn’t bat in the 9th) then that’s probably not an accurate statement. Davis Martin (4-1) earned the win going 5 innings, allowing 6 hits, walking 4 and striking out 7 while allowing 3 runs. So it wasn’t Martin’s best outing by even a longshot. John Henry Gonzalez pitched the 6th and 7th allowing just 2 hits, walking 1 and striking out 4, while Andrew Davis (a sophomore from Frisco) pitched the 8th and 9th innings with just 1 walk and 2 strikeouts. I honestly don’t remember Davis and I don’t know how to feel about that.

I think everyone played yesterday so it’s really kinda difficult to pick out just one or two guys who did well, but Cody Masters started in right field and went 2-2 with 3 runs scored and 2 RBI. Grant Little launched 1 home run to left field and also went 3-5 with 3 RBI. Zach Rheams also hit a dinger, going 2-5 with 4 RBI and Rheams DH’ed yesterday. Pretty good day all the way around for this group.

Texas Tech jumped out early, scoring 2 in the 2nd and 5 in the 3rd and the Red Raiders never looked back. The start of Caleb Kilian worked out well, he got the win (2-1) and a quality start with 4 hits, 1 run, 2 walks and 2 strikeouts. Dane Haveman, who has struggled a bit recently, gave up 2 more runs, walking 2 and striking out 3, while Connor Queen pitched the final two frames, walking 2, striking out 1 and allowing now runs. The offense had 12 walks and 13 hits, so they were on a base a ton. Zach Rheams hit another home run going 1-2 with 2 RBI. At the top of the lineup, Gabe Holt went 2-3 with 3 RBI and Braxton Fulford went 2-4 with an RBI and at the bottom of the lineup Cody Masters went 1-3 with 2 RBI.

Gabe Holt would start the game with a home run and then Josh Jung, Cam Warren and Zach Rheames would all also home in this game as well. Quite the homerific series for Rheams and Warren. Texas Tech as up 6-0 after the first three innings and that was the day for Ryan Shetter, who only threw 39 pitches, allowing only 2 hits, walking 2 and striking out 2. Richard Gilbert, a freshman from San Antonio got only 1 out in the 4th and allowed 2 hits, 3 runs, and 2 walks. Ty Harpenau (3-1) cleaned up the 4th and pitched the 5th and 6th innings allowing just 2 hits and striking out 5. Caleb Freeman earned the save going the last 3 innings, allowing 3 hits a run and walking none while striking out 3.

The offense belted out 12 hits, includ multi-hit games from Holt, Cody Farhat, Jung, Grant Little and Michael Davis. That’s the top of the lineup right there and probably a big reason why they scored 9 runs.