Seth: Well, downplaying Texas Tech’s chances to win games was only a matter of time before we lost, but we certainly didn’t give up the bit. I don’t know how many teams would still be in a conference game down to their third quarterback. With that being said, it appeared after the game that the tone of Kingsbury presser was decidedly “pissed” in my estimation. How did you feel after the loss to the Eer’s? Oh, and I wrote a bit last week about how the advanced stats say that Texas Tech should beat Kansas, Kansas State and Baylor, the decided loss is to Oklahoma, and there are three toss-up games in TCU, Iowa State, and Texas. You think that’s about right?

Travis: I kinda felt the same way. Sure, you want to win, but it was tough to walk away from that game completely disappointed. They fell in a hole early (Kirby needs to boycott 11am starts or something) but fought back and had a chance to tie the game late with their third string QB. And WVU is no joke, they will compete for the Big 12 Championship most likely. So, I don’t know. I wish we coulda won but I was proud of how hard they fought.

And yes, I agree with the advanced stats and how the season is expected to play out. I imagine we’ll make a game out of every remaining spot on the schedule and, depending on Bowman’s health, I feel like we can win more than we lose.

Travis: So last night (Wednesday night) I decided to turn on the back porch light. We usually leave it off, but for some reason last night I thought it’d be a good idea to turn it on. At about 10:30 I could hear our dog, Stella, barking so I let her in. She was kind of jittery and kept barking at the door. Of course, we just kept telling her to go to bed, but she wouldn’t. So finally I got up and looked out on the patio. This is what I saw. 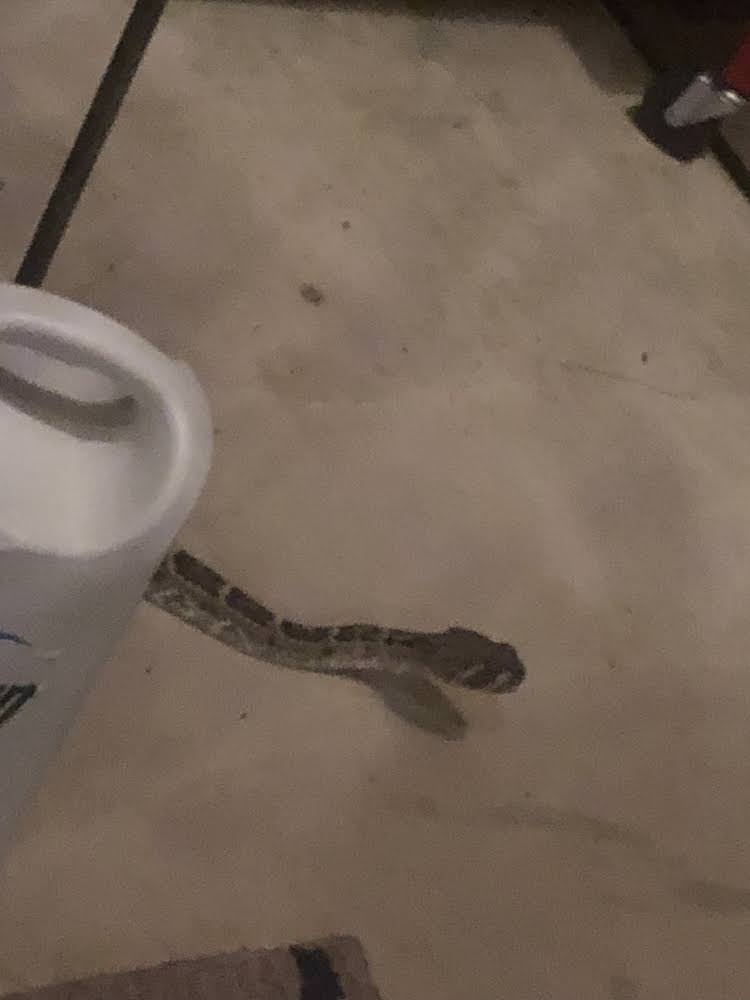 My wife and I kinda panicked and started trying to figure out what the hell to do. I was wearing shorts but she made me put on my boots. I went to the garage and grabbed a hoe (I’ve killed snakes with it before but not that big). I started frantically looking for a grinder because I wanted to sharpen the edge—I knew I only had a shot or two before that thing jumped at me.

I couldn’t find the grinder so I started trying to sharpen the hoe on my handheld knife sharpener (I’m sure it’s ruined now) but that didn’t really work. Meanwhile my wife was at the back door updating me on the snake. I dreaded going out there.

I went back to the garage and grabbed one of those four-foot floor scrapers that has a sharp edge. I figured that would work better.

I’d be a terrible serial killer. I started yelling and cussing and panting and slobbering and jabbing that damn scraper as hard as I could. No way could I be discreet.

He finally came out from underneath the cabinet and started striking at the scraper. I landed a good shot and after several more blows and sparks and f bombs, I got his head off. The damn thing kept moving around and trying to bite for several minutes. It was awful.

So now everyone is telling me there has to be a rattlesnake nest nearby and that’s not really what I want to hear. I kept dreaming about that snake last night—he kept coming back and wouldn’t die. I don’t know man, I’m kinda freaked out and our poor dog is super nervous. So I guess what I’m saying is: you wanna come spend the weekend with us and smoke out some diamondbacks?

Seth: I’ll be there. I hate snakes. All snakes. We’ll kill them. Don’t even care if they are good or bad. What you need is a Jack Russell terrier, they’re basically like a mongoose, but are capable of being walked and can be cuddled. My father-in-law had a Jack Russell and he would come back with DEAD Copper Head snakes on multiple occasions. He was awesome (he passed away as my father-in-law believed someone poisoned him with radiator fluid). The other thing you can do is go get you a squirrel.

I’m sure everyone remembers that my dad was a turfgrass farmer and he had these old gravel pits that he used for irrigation purposes, so there were always snakes rolling around. As you might guess, dealing in turfgrass it can get messy, so we’d go down to the gravel pits to wash our hands and because it would be muddy, we’d lay an old pallet down to bend down to wash our hands. Well, one day, I go down to wash my hands and I don’t notice that there’s a monster cotton mouth sitting there and I don’t here it until I’m actually bending down to wash my hands. I stupidly just start running up the gravel pit with the hope of escaping and I obviously made it (I’m still here!). The guys that I worked with went down and the snake was gone. I’ll never forget that damn snake opening its mouth.

Let me know if I can sleep on the floor.

Seth: Now that you’ve gotten me all worked up to go kill a bunch of snakes, I’ll change the topic to a new app that I ran across called Nuzzel. It’s basically an app that connects to your Twitter and it will send you updates, maybe twice a day, but I’m sure you can change the times you get updates, that summarizes what your friends are re-tweeting or what they are they are liking or what the friends of your friends are actually tweeting about. It’s helped me staff off of Twitter because I know I’ll get a summary of all of that during the day.

I’ve heard about that Nuzzel app and how it can really clean up the clutter of Twitter. I’ll have to take a look. And I guess my best thing this week is that floor scraper. Not the most ideal weapon but it worked pretty efficiently last night.

Travis: So we avoid politics like the plague around here but I want to know what your top five campaign promises would be if you were ever to run for President/King/El Jefe. Mine are:

1. No more passwords. Everything will be out in the open. Sure it’s a gamble, but enough is enough. I can’t keep up with all the passwords my life requires.

2. College GameDay will be shortened to 30 minutes and Desmond Howard will be immediately fired. He can hang around if he wants but all he’ll be able to do is eat grilled cheese sandwiches. If he laughs? He’s gone. If he makes some diva comment? He’s gone.

3. No more insurance commercials or bathroom pharmaceuticals commercials. Awe get it. We know everyone in America is getting ripped off on their insurance and has exploding diarrhea. Leave us alone. You’re not helping.

5. No more snakes or mosquitos or cats.

1. Everybody has to start running/walking at least 3 miles 3 times a week. Look, nothing clears your brain like running or walking. We need more clear brains (clearly). I will obviously lose on this platform.

2. Teachers get paid more money. Teachers spend more time with my kids than me, so they’re ridiculously important and should be paid accordingly. It would seem this would help things somehow. Don’t ask me where the money comes from, I’m an idea guy.

3. End the taco/burrito war by releasing the tacurrito AND THE burraco (trademarked and patent pending). This is a thing I’m working on I’m only releasing this if I’m elected supreme jefe. And don’t anyone think you know what this is. You don’t. This is revolutionary.

4. You have to learn a second language. I don’t care which two you learn, but you have to know at least two. Think of the cool people you could meet if you happen to speak the same second language as someone else. “Oh, you also speak Amharic too?”

5. I asked Fitsum and Youssouf they would do if they were in charge of the world and they to just give food to everybody so nobody is hungry. Sometimes, both kiddos sometimes have eating issues, sometimes they overeat because maybe they spent some days not having enough food at some point in their lives, so I get why this is probably important to them. Since this is what they would choose, I’ll go with it as well.

Travis: Welp, I’m definitely voting for you. Can you do something about those commercials, though?

Seth: With TCU on the horizon, I’m not even sure if their starting quarterback will play and of course Texas Tech is on their third quarterback this year, so both teams will see how good their depth is. What’s going to be the key to beating TCU in Ft. Worth in primetime?

Travis: It’s hard to say how it will play out in Ft. Worth. I heard from a reliable source that Bowman might be ready to go? I don’t know, that seems a bit optimistic but this guy is pretty dialed into what’s going on.

If it’s Duffey, I hope Kliff dials up some plays that use his speed and evasiveness to exploit the TCU defense. That fourth down scramble late in the game was a thing of beauty and I hope we get to see more of that. We’re probably gonna need to plan for a couple of interceptions so hopefully they won’t be too damaging and we can overcome. On defense, Tech just has to be ready to contain that speed. They’re so fast.

Seth: Yeah, I have this as a toss-up game and comes down to a field goal on some level. I think we’re going to find out which team is better at preparing for an opponent and you also wonder about revenge in a way. I get the feeling that Sonny Cumbie has bad feelings towards Texas Tech (spite is a decent reason to put 82 on Texas Tech) and Kingsbury for not wanting that to happen again. I’ll take Texas Tech, something like 34-31, so similar to your score.