We take a look at the new defensive coordinator.

Patterson essentially started out as a high school coach back in the late 80’s in Oklahoma before moving on to Allen High School near Dallas before jumping on with Tulsa for the time period that Todd Graham was there (and really before that as well), staying at Tulsa from 2003 through 2010 becoming the defensive coordinator from 2006 through 2010. Patterson then followed Graham to Pittsburgh for one year in 2011 and then started his work at West Virginia.

I’d be lying if I told you it’s a mixed bag because it is a mixed bag to some extent, some good and some bad. The numbers for last year are superb for Utah State, but the numbers for when Patterson was in charge at Arizona State are similar (and sometimes worse) from what’s been happening at Texas Tech. 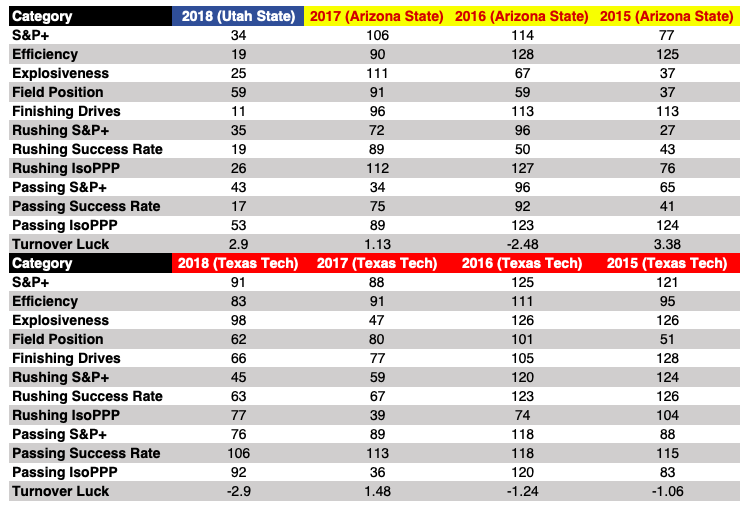 The thing that I’ve been trying to wrap my head around is the one thing that I can somewhat pull out of these numbers, looking for the one thing where I can point to where Patterson has consistently done well and that’s a bit tricky. If you dig down to the individual Rushing S&P+, other than 2017, those are some decent numbers, and then you could say the same thing about the Passing S&P+ except for 2016.

I am concerned about the rushing IsoPPP, which is big plays, essentially Patterson’s defenses do give up big rushing plays, except for last year for Utah State, and that could be a real problem in the Big 12, where it is more of a running league than people would like to admit.

I’d love for you all to see if you can pull something from those numbers that will correlate to success.

Patterson’s opening press conference is really pretty good. He says all of the right things (Patterson’s part starts around the 17:14 part). He talks about negative plays and having a mechanism to call defensive plays quickly to counter offenses that do the same thing. Patterson correctly notes that most big plays are the result of misalignment or miscommunication, so he tries to implement those things so that they are easy to teach.