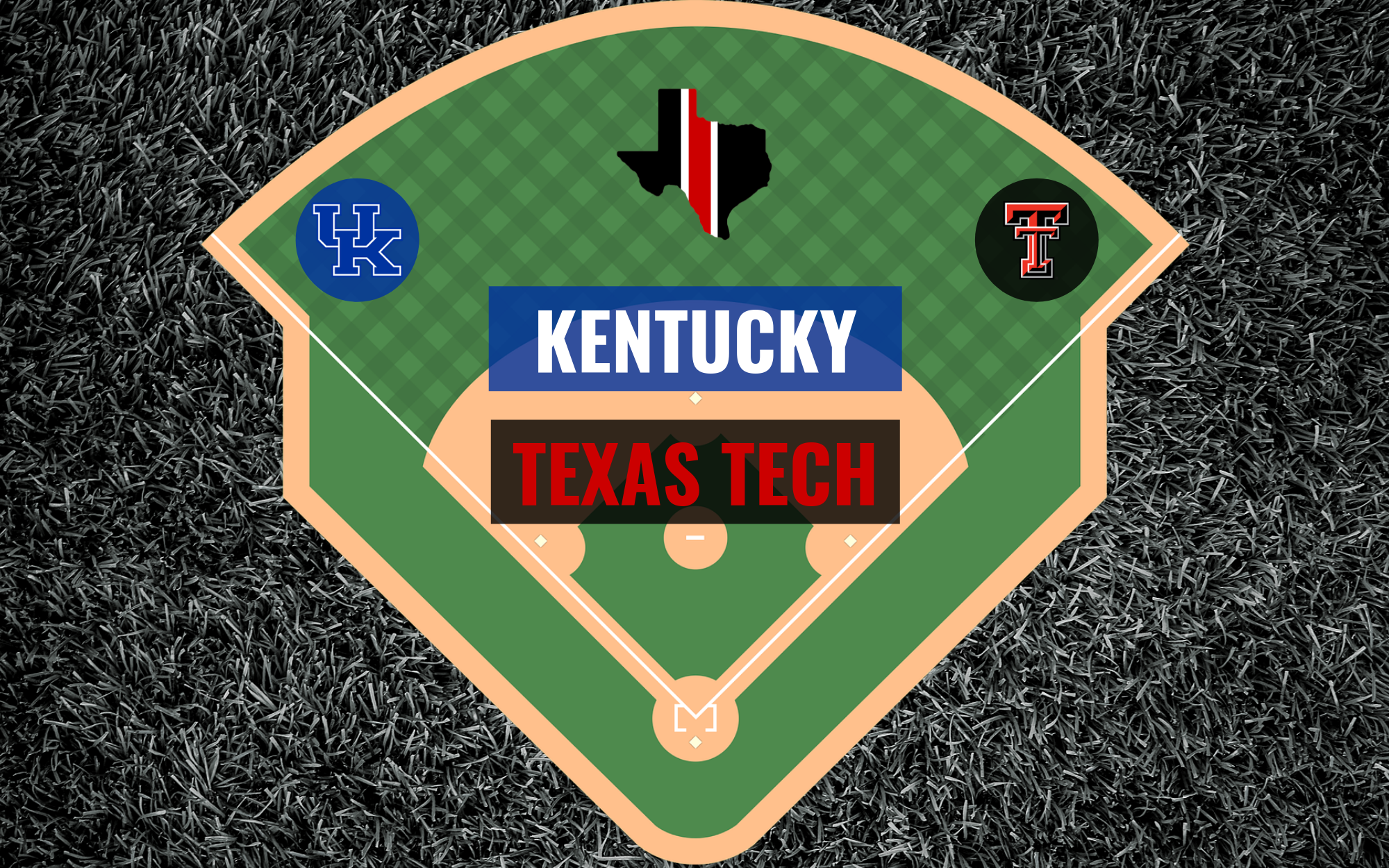 The Red Raiders host the Wildcats for the weekend in what should be a pretty terrific series. Kentucky isn’t ranked and so there’s some question about how good they are. The Wildcats opened their season with a 3-game series against Austin Peay and absolutely demolished them: 8-4, 11-5, 12-1. It would probably be safe to say that Kentucky hasn’t been tested just yet. Texas Tech meanwhile started the season hosting Oregon, losing the opener 9-4, but coming back to win the next two games, 12-11 and 6-4. Tadlock has shaken up the starting rotation a bit, moving Caleb Kilian from the Friday spot to Saturday, taking Arkansas transfer Bryce Bonnin out of the Saturday spot and moving Erikson Lanning to Friday (today) and freshman Mason Montgomery to Sunday. It will also be interesting to see how Tadlock tinkers with the batting lineup as well.

But Tech coach Tim Tadlock put a lot on Holt, installing him at the top of the order from day one and asking him to switch from second base to right field during the stretch run of a season that ended at the College World Series.

“It was for sure difficult,” Holt said Thursday. “I’d never really played outfield. I’ve always played infield my whole life, so making the switch was kind of hard. But during the fall, I got some time out there, so that definitely helped. I feel pretty comfortable out there now.”

Comfort at the plate has never seemed to be an issue. The left-handed hitter from Bonaire, Georgia, ranked second in the Big 12 in hits (94) and stolen bases (29 for 30), led the conference in runs (70) and was named Big 12 freshman of the year and first-team all-conference.

For the third time this season the Red Raiders came from behind to take the lead and hold on for the win. Tech headed into the 6th down 4-1. They cut the lead to 4-3 starting with a leadoff walk by Gabe Holt, Brian Klein then hit a 2-out double putting runners on the corners. Junior DH Doug Facendo’s base hit cut the lead to 4-2 and his hit ended starting pitcher Zach Thompson’s day. Reliever Carson Coleman was welcomed by Dylan Neuse with an RBI double down the third base line followed by a Tanner O’Tremba walk, loading the bases for Cameron Warren. Warren hit a 3 RBI double to the left-field corner pushing Tech to a 6-4 lead. Braxton Fulford followed with an RBI single pushing the score to 7-4. Brian Klein and Braxton Fulford both turned in multi-hit days.

Erikson Lanning got the start for the Red Raiders today lasting 5.0 innings. He allowed 0 earned runs, walked 1, and struck out 4. Lanning started the day by striking out the side. Connor Queen once again came in for 1/3 of an inning in relief and earned the win, putting him at 2-0 on the season. Dane Haveman also turned in 1 1/3 innings of shutout baseball and Taylor Floyd checked in for 1 2/3 innings allowing 1 hit but striking out 3 as well.

All four of Tech’s victories this season have been of the comeback variety, as the Red Raiders (4-1) rallied from three runs down Saturday with a six-run fifth inning, highlighted by the blast from Dylan Neuse.

Neuse led the team with five RBI Saturday, recording his first home run as a Red Raider in the second before connecting on a grand slam in the fifth that put Tech ahead 8-5. He finished 2-for-5 with the pair of home runs, has hit safely in all five games as a Red Raider and recorded an RBI in four straight games.

Starting pitcher Caleb Kilian struck out four in 4 1/3 innings of work. He received solid support behind him as the Red Raiders turned three double plays on the day. Freshman Hunter Dobbins (1-0) earned the win in his first appearance as a Red Raider, closing out the fifth inning. Junior Dane Haveman tossed 2.0 strong innings before turning it over to redshirt freshman Clayton Beeter, who recorded a two-inning save.

Kentucky’s Ryan Shinn led the Wildcats, going 3-for-5 with a home run, two doubles and three RBI. After a solid first four innings from Kentucky starter Jimmy Ramsey, the Red Raiders bumped him from the game in the fifth and ended up handing reliever Mason Hazelwood (0-1) the loss.

Tech jumped out to a lead for the second time this season thanks to an RBI single from junior second baseman Brian Klein in the bottom of the first. Klein knocked in junior third baseman Josh Jung with a soft liner to single after Jung reached on an error and took second.

Kentucky tied it at 1-1 in the top of the second before Neuse led off the bottom of the frame with his first home run as a Red Raider to put Tech back in front, 2-1. The Wildcats would fight back with four runs in the fifth to gain a 5-2 advantage.

The Red Raiders went to work in the fifth with sophomore Gabe Holt hitting a leadoff double followed by a single from Baker that cut it to 5-3. Jung ripped a double to left to put runners on second and third, then back-to-back walks to junior second baseman Brian Klein and designated hitter Doug Facendo made it 5-4 and forced Kentucky back to the pen. Neuse sent the third pitch he saw over the left-center field wall to give Tech an 8-5 lead.

Kentucky put runs across in the sixth and seventh to make it a one-run game, but O’Tremba drove in an RBI in the seventh and Baker scored in the eighth to provide insurance for the Red Raider bullpen.

The Red Raiders (5-1) recorded season highs of 19 runs, 19 hits and 13 walks to capture their fifth straight win of the season. With a 7-4 win Friday and a 10-7 win Saturday, Tech finished with 36 runs during the three-game set against the Wildcats (3-3). With the sweep, Texas Tech improves to 4-2 all-time against Kentucky after dropping two of three to the Wildcats in Lexington last season. Head coach Tim Tadlock improves to 9-9 all-time against current members of the SEC.

“I really enjoyed the fans coming out today,” Tadlock said. “I got a kick out of the video of the student body last night at the basketball game. I heard that they supported the guys at the track meet, and we won a Big 12 Championship in track this week. Had a big basketball win. I think the biggest takeaway for me is that the student body is doing a great job supporting these guys. You could see that early today, I wouldn’t blame them for leaving today when it got a little bit chillier. That’s probably the biggest thing – people supporting us, and we appreciate that.”

Freshman left-hander Mason Montgomery was impressive in his second start, tossing 5.0 innings and giving up two runs on two hits with five strikeouts. He kept the Wildcats at bay after the second inning, which allowed Tech to turn a 2-2 deadlock into a 12-2 advantage.

For the third-straight game, Tech posted a six-run inning, doing so on Sunday in the third. A three-run homer from freshman Tanner O’Tremba broke the tie, and Tech would add three more with senior Cameron Warren scoring on a wild pitch and junior Brian Klein connecting with a two-run single. Tech made it 10 unanswered runs with four more in the fourth. Freshman Max Marusak drove in his first career RBI with a sacrifice fly to right, then Tech would add RBI singles from the trio of freshman Dru Baker, junior Josh Jung and Klein.

Kentucky plated a run in the top of the sixth before Tech erased any doubt with three runs in the sixth and four more in the seventh. Klein went 4-for-7 at the plate to match his career high and lead six Red Raiders with multi-hit games. He added four RBI and two runs scored, while O’Tremba led Tech with seven RBI after an impressive 3-for-5 showing, including the second dinger of his career. Jung and Baker also had three-hit games with Jung going 3-for-3 with four walks, two RBI and two runs while Baker added a 3-for-6 effort with a walk, an RBI and four runs scored. With a walk in his final plate appearance Saturday, Jung has reached base safely in eight consecutive trips to the plate.

The Red Raiders appear to be gelling well as they get to konw each other and find their identity as a team. Sophomore outfieler Gabe Holt missed the game with internal bruising as a result of a hard collision with the center field wall making a play on Saturday. Holt is expected to return for the Frisco College Baseball Classic, freshman Max Marusak replaced Holt in the late innings Saturday and got the start on Sunday in his place.