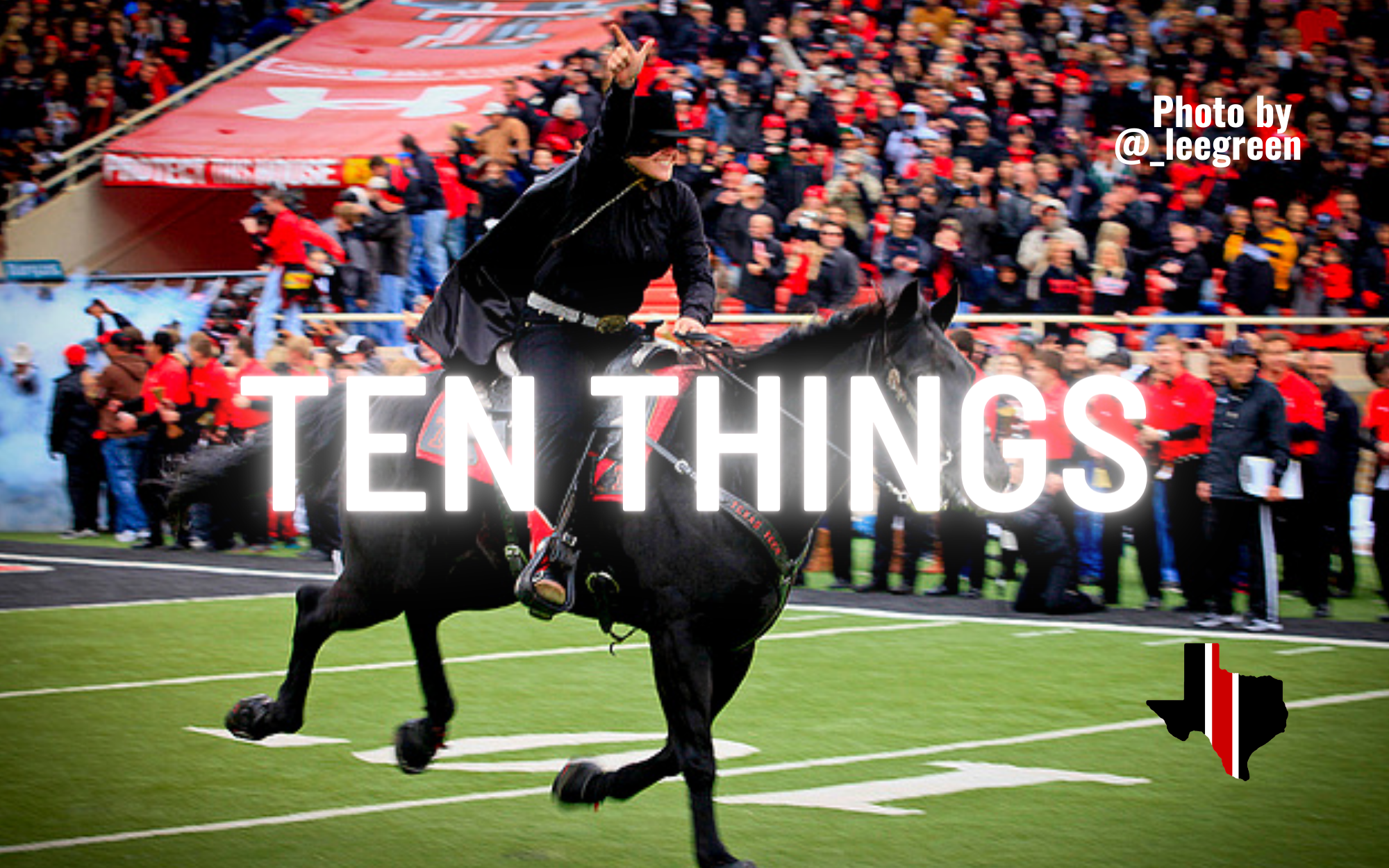 1. You Are What You Are. I don’t think the tone of these Ten Things has been great the past few weeks, sans the West Virginia win, which was really nice all the way around. But this isn’t a good team. There are too many things that this team does not do well. That just appears to be true. I hate being right before the game, but I thought that the offense would struggle because the offense cannot impose itself on opponents. Those days are long gone.

“It may have been a down early. But we said we wanted to go down and try to kick a field goal and we needed to score a touchdown. We know we needed to have time left. We had to stop them on the back end. We got Trey (Wolff) down into range where we wanted it. We got inside the 25, so a 39-yard field goal, which is in the range where he’s at right now as a kicker. We understand he hadn’t made one all year and we really haven’t attempted one in about three weeks. It may have been a down early, but it what we wanted to do. We wanted to kick a field goal on the first or second possession. We had to have time to get it back, kick it deep, stop them on defense, use your timeout, then have another chance on offense to go down and throw it in the endzone.”

3. Chasing Points. If Wells is going to chase points and go for 2 when down there were still nearly a quarter remaining, but not kick what would seem like a pretty sure a pretty good spot to kick a field goal in the first quarter and then maybe this wouldn’t have even mattered. I don’t have an explanation. And then if you’re really chasing points, don’t you maybe go for an onsides kick since your defense has been out on the field a ton in the second half and two-thirds of your starting defensive line, Tony Bradford and Eli Howard were out? I don’t know.

4. Defense Played Well. Generally speaking, I thought that the defense played well, but the stats won’t prove that out. I thought that they ran to the ball, I thought they tackled well for the most part and notice that in the first half, the offense was, believe it or not, was actually on the field longer than TCU, 16 minutes to 13 minutes. In the second half, TCU held onto the ball for nearly 11 minutes in the 3rd quarter alone and in the 4th quarter TCU held onto the ball for 10 minutes. That’s a 10 minute differential in the second half, 21:49 to 9:11.

Generally speaking, I think that this loss was not the fault of the defense. They did as much as they could. The pass defense was pretty good (Duggan is a terrible passer, but still only allowing 73 passing yards is insane) and what I did not expect was TCU running the ball for 270 total rushing yards, TCU ran for 45 yards in the first half and then ran for 225 in the second. Fatigue or Cumbie figuring out that this was the only way that TCU could move the ball.

5. Can’t Block. I felt terrible for Henry Colombi. He never had a chance. Again, I thought before the game that TCU would manhandle the offensive line and they did. It was abysmal. And after the Oklahoma loss, you would have thought that the tape would show some things to improve, but the offensive line is just not fleet-footed (not sure if this is a word) enough to handle the speed that TCU presents and even if opponents are must marginally athletic, the line does not seem equipped at the tackle spots to handle edge rushers. And the line isn’t strong enough to run the ball with any significant success.

And a special shout-out to Colombi, who took an absolute beating. I don’t know how he kept getting back up. The running backs took a beating too I thought, but I’d guess that Colombi barely weighs 175 and he just took some nasty hits and kept wondering if he’d make it though the game. Sacked 5 times and pressured a handful of other times.

* Statistically, Texas Tech had the edge in passing, throwing for 234, but a huge chunk of that, nearly 120 yards, came on two catches. That’s 5.7 yards per attempt for Texas Tech and if you take out those yards and completions, it’s 3 yards an attempt. Colombi never had a chance.

7. Special Teams. Man, this is a hot mess. Two blocked punts, 1 for 2 on field goals, allowing 40 yards per kickoff, and allowing a handful of really long punt returns (TCU’s returner averaged about 25 yards per return with a long of 50). I feel bad for Trey Wolff, I’m shocked that there’s not someone out there that can kick a field goal, it’s obviously in his head and I feel terrible about that, but the special teams has so many issues, it’s kind of insane, but maybe par for the course.

8. Quotes. Just one quote since I’ve already quoted above on the 2nd and 4:

“This is a tale of two games. The first part of the game, I thought our defense played outstanding. We really struggled on offense we struggled protecting the quarterback. On third down, we struggled to keep drives sustained but our defense played very well. We were down several guys. I thought their effort and production early in the game was really good to be down 10-0 with where the field position started in those early drives. We got a little momentum there before halftime with the offense and then the field goals. It was great execution with the field goal team to go in and out with three seconds to go and getting set and getting it off. I was really proud of that. It was a little bit of a blow in the first series of the third quarter, they (TCU) take it all the way down and score, but we battled. Then we started hitting some plays on offense, some deep balls. It’s just not enough. Then at the end, it was always battling trying to get back into the two-score range. We scored to get within 11, went for two to get down nine. Now we know a field goal and a touchdown can win the game. Then unfortunately, we just missed a field goal at the end and got it into a good range. Unfortunately, we missed it and that’s that. These guys continue to fight. They continue to really spill their guts. We’ve got to go back. We’ve got to continue the faith in our players and our staff. We’ve got to continue to fight every week and that’s all we can ask of our staff and our players right now. Keep fighting and trying to find a win.”

9. What’s Next? I seem to be asking this question a lot and I really don’t know. Again, I’m good with a change at the top. The in-game blunders appear to be a pattern, not a one-off situation where there’s you just sort of choose incorrectly. I just do not want Art Briles and basically, this blog will be like the most kick-ass basketball and baseball blog out there.

10. Up Next (Totally Different that What’s Net). Baylor is up next Saturday, kickoff is at 3:00 p.m. and the game will be on FS1 again in good old Lubbock, Texas. Baylor lost to Iowa State yesterday in a nail-biter of a game.