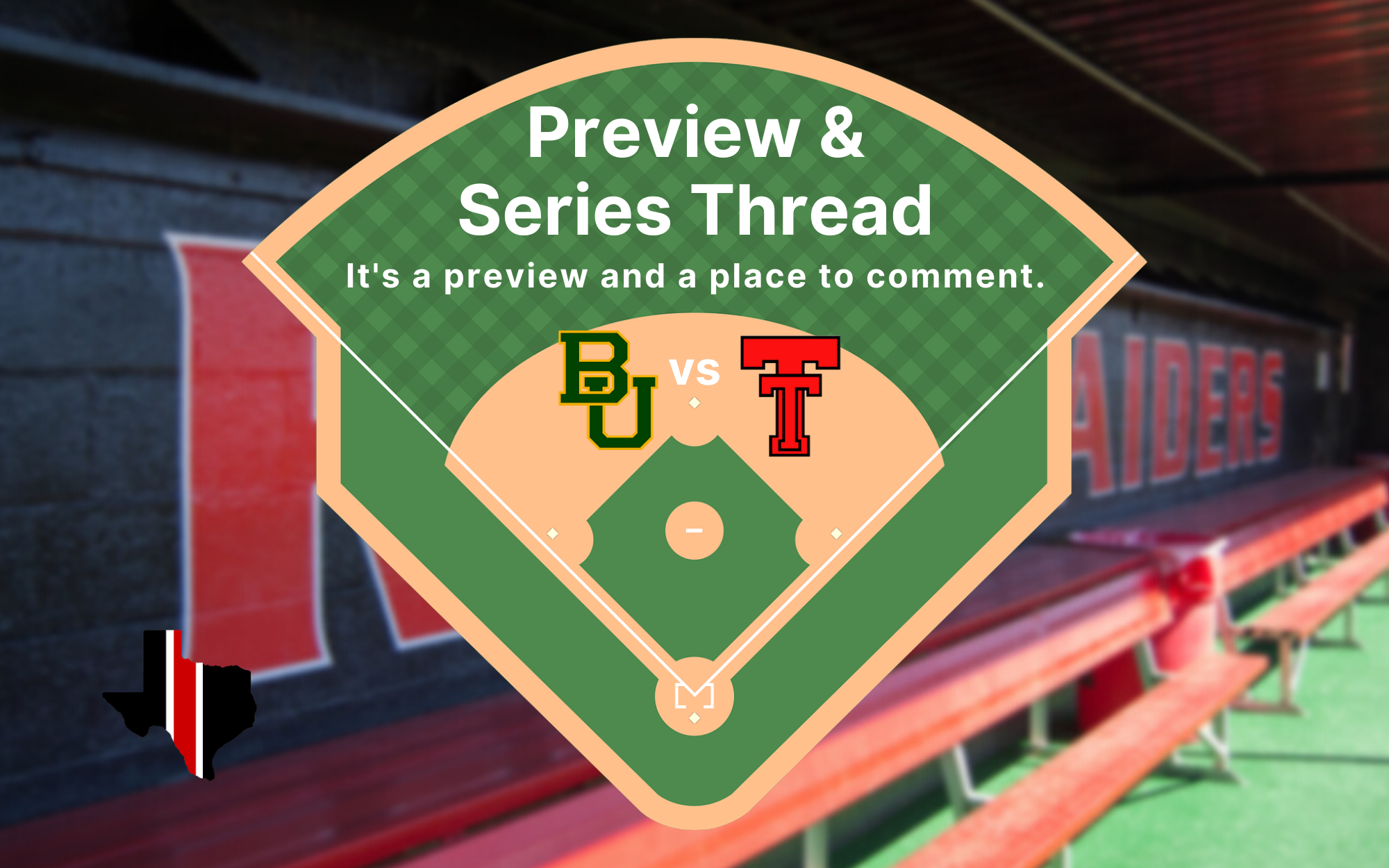 Alright, no joke, I’m going to be around this weekend to update. Without question. I’ve considered how many times I wasn’t able to do something on this blog over the past decade and it’s pretty rare, so I don’t feel too guilty.

Regarding this series, this is a bit of a weird series in that Baylor, at least statistically, isn’t as bad as their record. They lost the opening series to UT-Rio Grande Valley, played some patsies in Memphis, Xavier, and North Carolina A&T, lost the UT series, was swept by TCU, won the WVU and KU series. So their record is a bit inflated with those sweets over the patsies. So the statistics may not be all that relevant because of the relatively easy wins.

Regarding Texas Tech, I’d love to see them sweep a series, they’ll need to do that to catch Texas and TCU, both are 10-2, and I think that Texas’ schedule gets much more difficult coming around the bend (they are on the road against Oklahoma State this weekend). And I think that Texas Tech has settled their rotation, after having to deal with so many injuries, and the lineup is really centered around Jace Jung, Parker Kelly, Cal Conley, and Dru Baker and they’ve generally raked thus far, but they’ve been so good all year that anything less than that will likely result in a struggling offense. It will certainly make a difference with Texas Tech being at home and appreciate how the team won the series last week against West Virginia on the road.

No. 5 Texas Tech baseball enters the second half of Big 12 play this weekend with a three-game home series against Baylor at Dan Law Field at Rip Griffin Park.

The series begins Friday at 6:30 p.m., followed by a 2 p.m. first pitch on Saturday and Sunday. All three games can be seen on Big 12 Now on ESPN+ and heard on the Texas Tech Sports Network.

The Red Raiders (26-8; 7-5) are looking to stay in the hunt for the Big 12 title entering the final month of the regular season. Tech is currently three games behind No. 3 Texas and No. 8 TCU in the league standings with a matchup against the Longhorns on deck next weekend. Tech took 2-of-3 from the Horned Frogs in Lubbock earlier this month.

Despite a rough stretch of injury luck, the Red Raiders have won six of their last seven games entering the weekend following a series win at West Virginia. The club has been off since Sunday as its midweek matchup against Oklahoma in Amarillo was postponed to next month because of weather.

Baylor used a six-run second inning and four home runs overall to defeat No. 5 Texas Tech, 12-4, Friday night in the series opener at a sold out Dan Law Field at Rip Griffin Park.

Baylor’s 11 runs marked the most this season by a Big 12 foe against the Red Raiders (26-9; 7-6), who will need to bounce back over the next two days to win its third-straight conference series and fourth this season. Baylor (25-12; 6-7) has not left Lubbock with a series win since 2010.

The Bears were able to break the game open in the second inning with four runs before the Red Raiders were able to record their first out as Cade Currington connected on a two-run homer followed by a RBI double from Kyle Nevin and a RBI single from Chase Wehsener. Currington brought home another run later in the inning with a bases-loaded walk.

Junior Braxton Fulford ripped a three-run double down the left-field line with two outs in the eighth inning to lift No. 5 Texas Tech baseball to a 4-1 win over Baylor on Saturday at a sold out Dan Law Field at Rip Griffin Park.

Micah Dallas set a career-high with 10 strikeouts in 7.0 innings of work in the no-decision, while Ryan Sublette (5-1) earned the win for the Red Raiders after throwing the final two innings of relief. Dallas scattered six hits and didn’t allow a walk or an extra base hit over his seven frames. Sublette faced the minimum six batters in his relief appearance by coaxing an inning-ending double play in the eighth and retiring the Bears in order in the ninth.

Baylor connected on a pair of solo home runs in the opening inning and broke the game open with a five-spot in the seventh to take the series from No. 5 Texas Tech Sunday after a 13-3 victory inside Dan Law Field at Rip Griffin Park.

The series win marked Baylor’s first in Lubbock since the 2010 season and the first Big 12 series loss at home for the Red Raiders since 2018. This season, Tech had previously overcome a Friday night loss to win series against Oklahoma State and TCU.

“It’s really hard to get these guys to look back and reflect until something like this happens,” head coach Tim Tadlock said. “What you hope is, when you lose a series, that they try to figure out exactly who they are individually and as a team.”