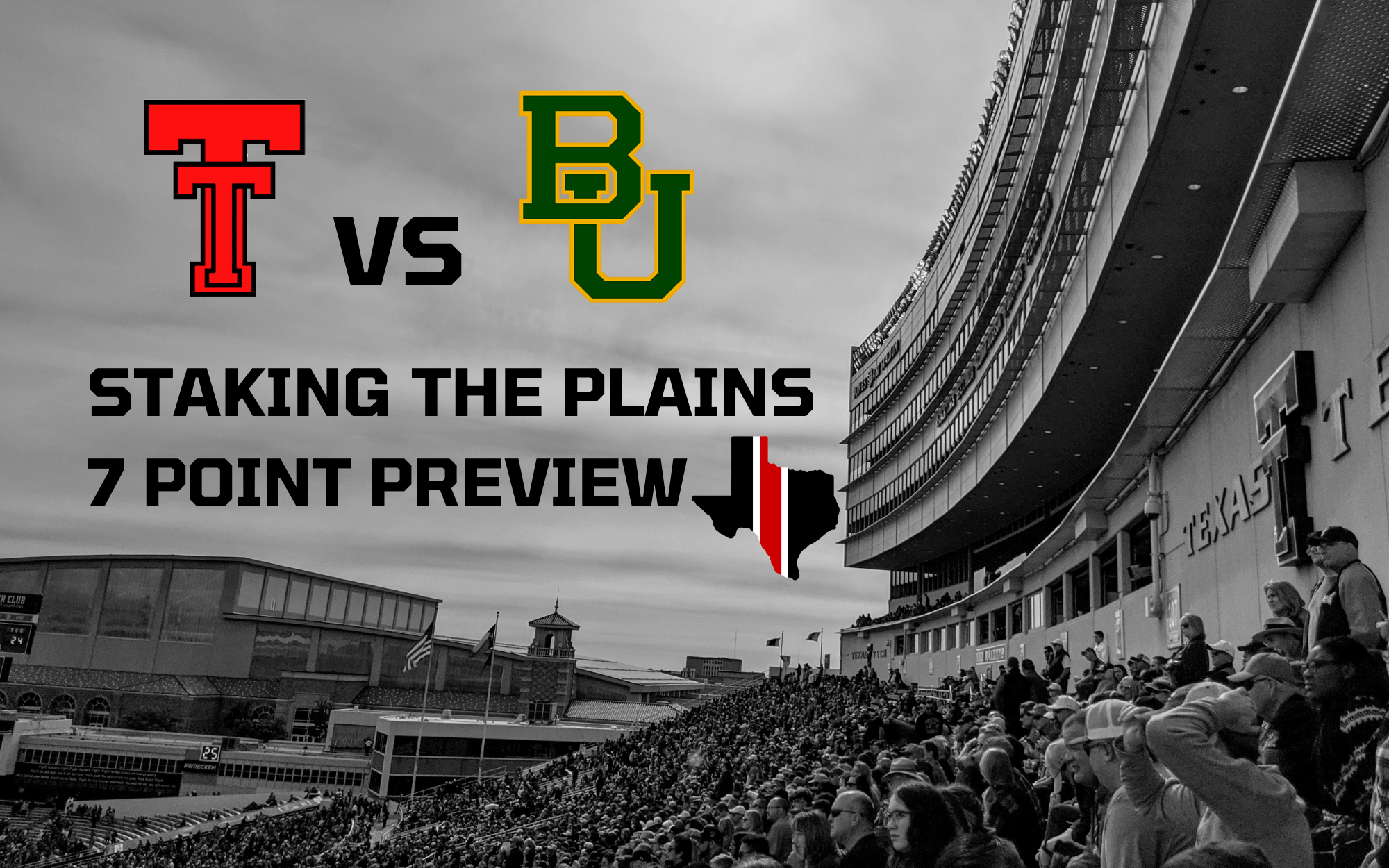 The last one before the McGuire era begins.

I was all but certain that Oklahoma State would be the most balanced team that Texas Tech faced and that’s still true, but didn’t realize how close Baylor was to that statement too. I don’t know how accurate that will be given Baylor will be without starting quarterback Gerry Bohanan for this game, so there’s a decent chance that the Baylor offense won’t be as good as it would be with Bohanan at the helm.

I’d add that head coach Dave Aranda’s best attribute has been knowing when he’s wrong with his first offensive coordinator hire and looking to an offense that likes to run the ball a decent amount and that invariably helps the defense. I think it is one of the reasons why Joey McGuire has retained Sonny Cumbie as the offensive coordinator.

QB Blake Shapen (6-0/192): With Bohanan out, I think the quarterback will be Shapen. Shapen doesn’t have a ton of stats, just in mop-up time, completing 80% of his passes for 162 yards. If we can gather anything from Bohanan’s stats, he was averaging 196 yards passing a game, with 6 picks and 17 touchdowns while completing 64% of his passes. Bohanan had also run for 303 yards, averaging 4.3 yards a carry and had 9 touchdowns, averaging 27 yards a game.

LB Bernard Terrel (6-1/222): Pressure. Terrel is one of a handful of players that are behind the line of scrimmage, but Terrel may be the most impressive. At linebacker, he’s got 68 tackles, 5 sacks, 8 tackles for a loss, 2 pass break-ups, and 5 QB pressures. I’d like to mention that big man Gabe Hall (6-5/290) leads the team with 6 sacks and is obviously a huge body for the interior of the defense.

Punter Issac Power averages about 45 yards a punt, which is pretty good, but not as good as Austin McNamara. Isaiah Hankins is a good field goal kicker, knocking through 12 of 15, but 2 of his 3 misses are 50+ and has no 62 yard field goals. Noah Rauschenbert handles kickoff duties and of his 67 kickoffs, 59 were touchbacks. Trestan Ebner averages nearly 9 yards a punt return, so they will try to set up the return, which is different than what OSU did and Ebner averages about 24 yards a kickoff return.

Uniform Combination for the final game. 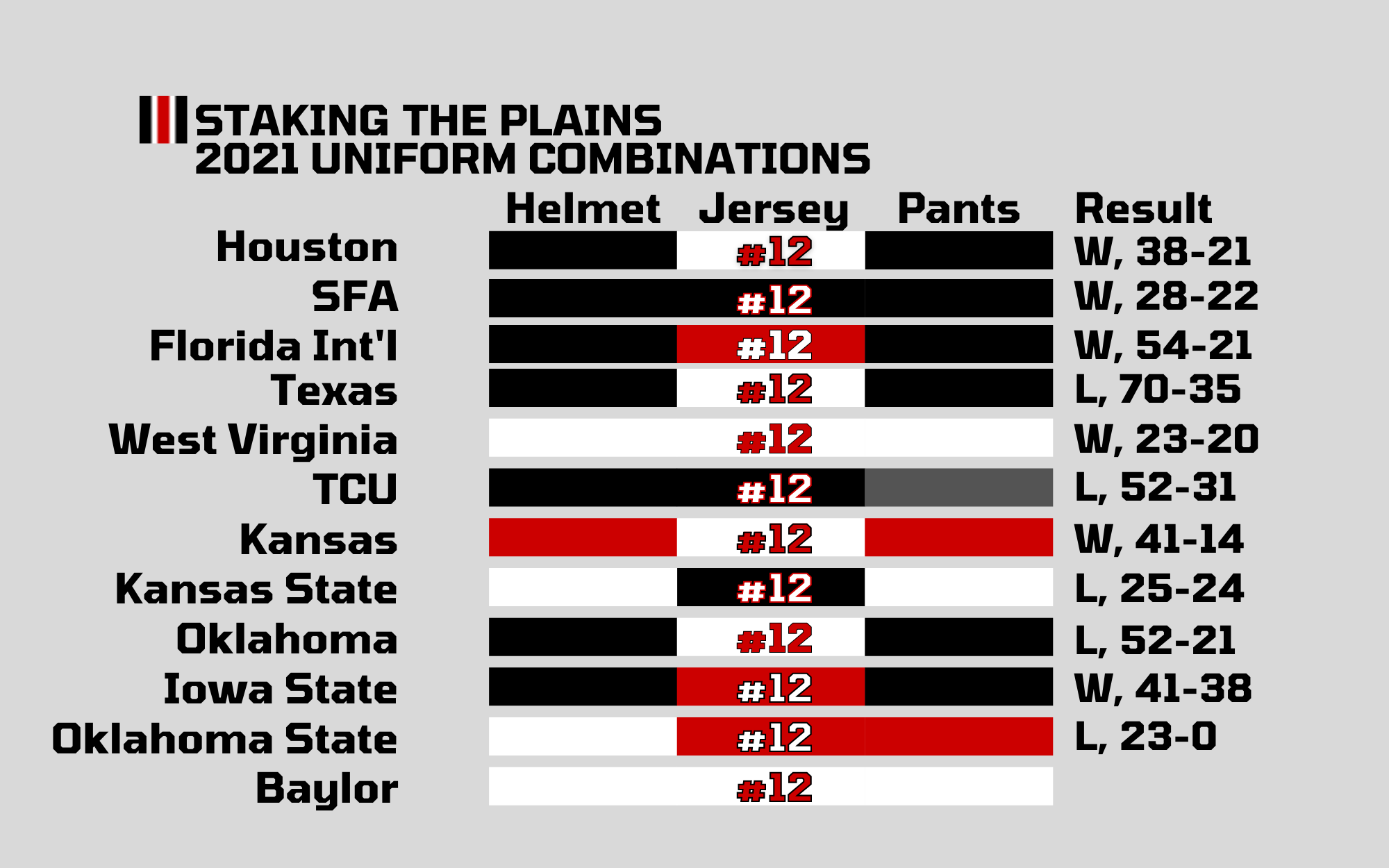 I’ll take Texas Tech and those points. I don’t think the game will be as wide-open this year because Bohanan is out. He’s pretty special and a big cog in the offense. I’ll also take the under as well, that Baylor defense is good.

I also know that I sort of sputtered as the season wound down. New coach, basketball started (which it always does), just so many activities that I sort of run out of time. Not enough time. Now I’m off to do a preview of Texas Tech hosting Lamar.