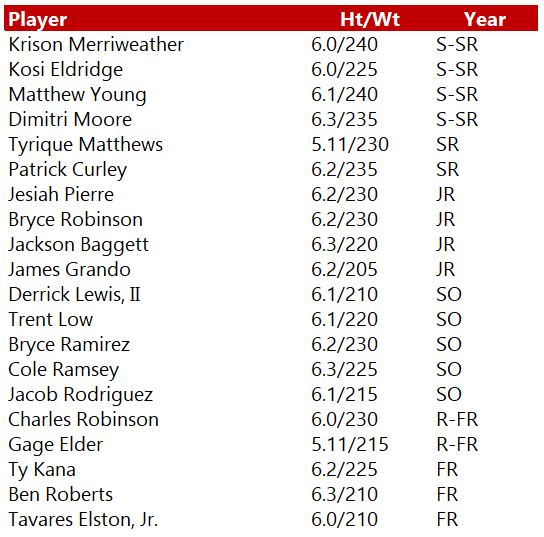 It’s pretty nice to have the group of super seniors and seniors that are available. There was a lot of talent that left, Riko Jeffers, Colin Schooler, Brandon Bouyer-Randle, and Jacob Morgenstern are the seniors I can recall. Jeffers and Schooler were the biggest contributors.

Thus, it would seem as if Moore, Merriweather and to an extent Eldridge would be the guys that step up along with Matthews and Curley. It would seem as if their time is here and they’ve always been behind other seniors or more talented players. My other guess is that Moore is a McGuire guy and he didn’t come to Texas Tech sit and watch. I’d also add that Moore was very good while at Vanderbilt, the SEC All-Freshman team in 2018 with 84 tackles, then in 2019 started 9 games with 99 tackles, 6 tackles for a loss and 3 pass break-ups as a sophomore. He slumped as a junior, gathering just 36 tackles, and then played just 6 games at Missouri State.

Merriweather was 6th on the team with 52 tackles, t.t tackles for a loss and a sack. I don’t know if Merriweather is a 3-down linebacker, but I think he is very useful in two downs for sure. Eldridge was utilized as the linebacker/safety, but never really saw consistent playing time. I don’t know what the staff will do with him here. Pierre did have 27 tackles last year and I sort of missed them. I know the staff last year wanted him smaller, I think he was at 240 coming into Texas Tech and wanted him closer to the 230 which is where he’s at.

Robinson redshirted in 2019, then saw no action as a redshirt freshman and was part of the scout team, recorded no action last year in 2021, and so he’s a junior with no statistics? That’s strange for sure. Lewis was the only linebacker commit for his class. Again, this is strange recruiting practices by Matt Wells. The two significant walk-on’s, Ramirez was here last year and I think a guy that impressed the coaching staff. Rodriguez is the Virginia quarterback transfer that appears to be playing linebacker.

McGuire quickly remedied the recruit situation with the addition of Kana, Roberts, and Elston. Kana is obviously the most ready and he’s actually on campus, while I absolutely loved the film of Elston. He was a difference maker on is highlight video.