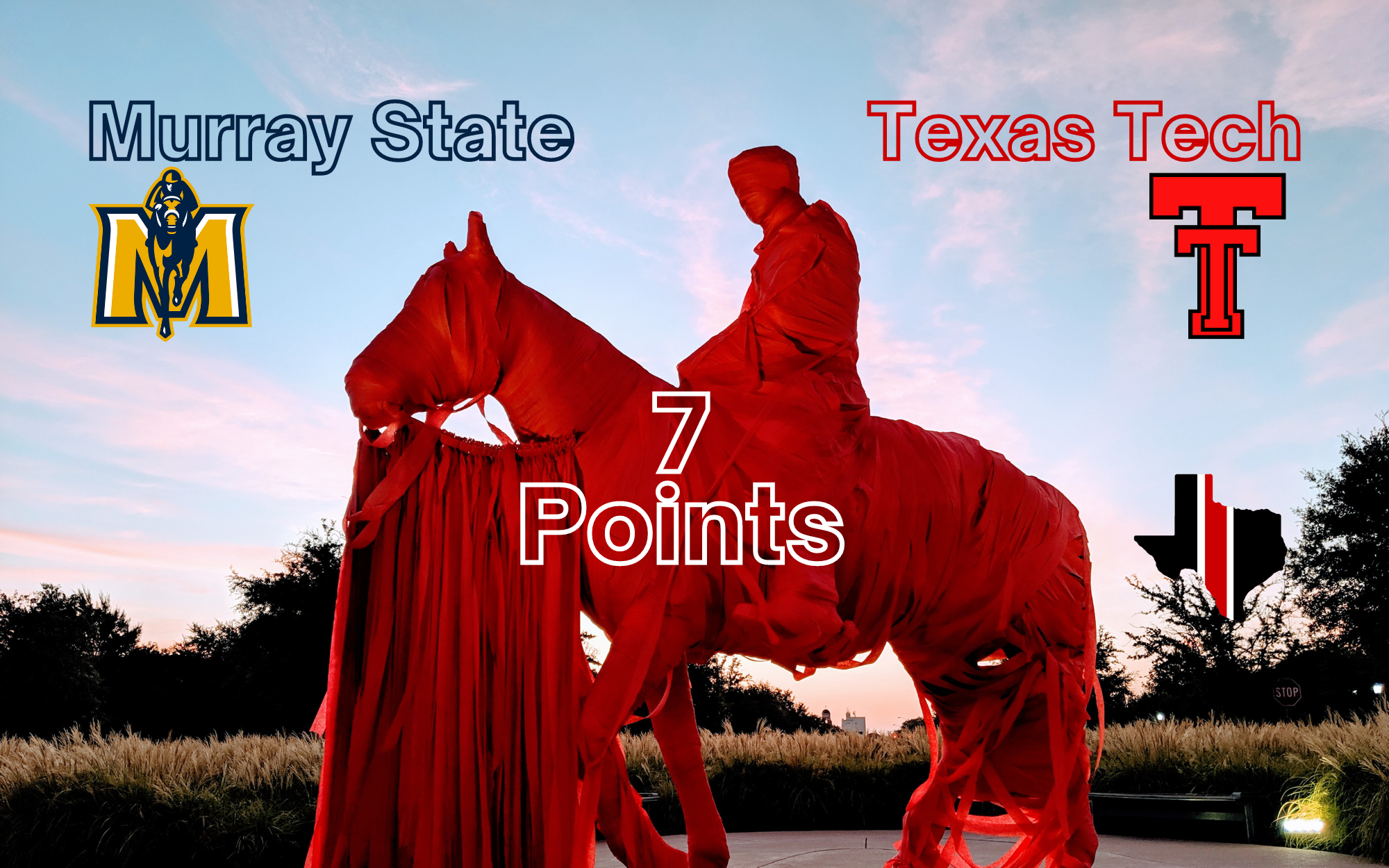 I typically do stats here and I’ve figured out (I’m old and I actually figured it out on my own and am quite proud of myself) how to do a spider-graph to visually display the stats. I think it will look quite nice and you don’t get anything this week because Murray State doesn’t have those kinds of stats, but you will moving forward.

Since I don’t have those stats, I thought I’d show you the comparison between the Texas Tech offense and Western Kentucky offense from 2021 and the Texas Tech defense and Oregon defense from 2021. And just so you know what you are looking at, the closer to the center a team is in a category the worse you are, while the closer to the edge, the better you are. Thus, Western Kentucky was terrible at rush efficiency, but great at pass efficiency. 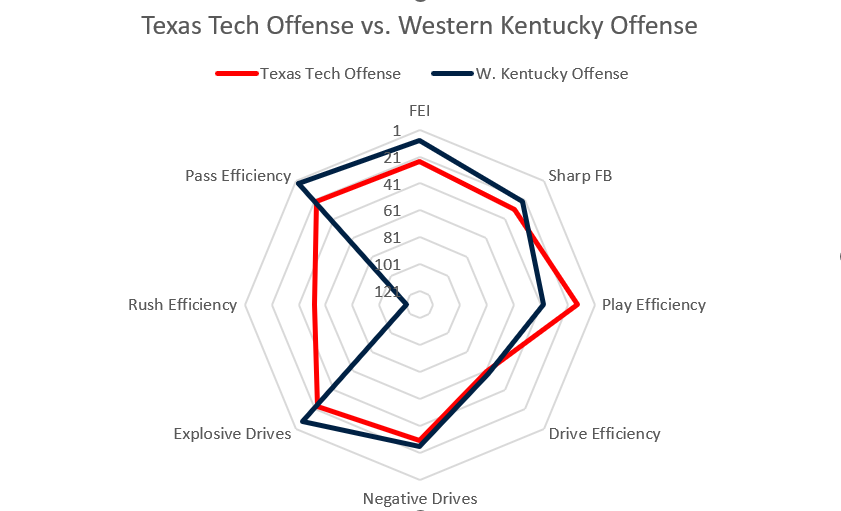 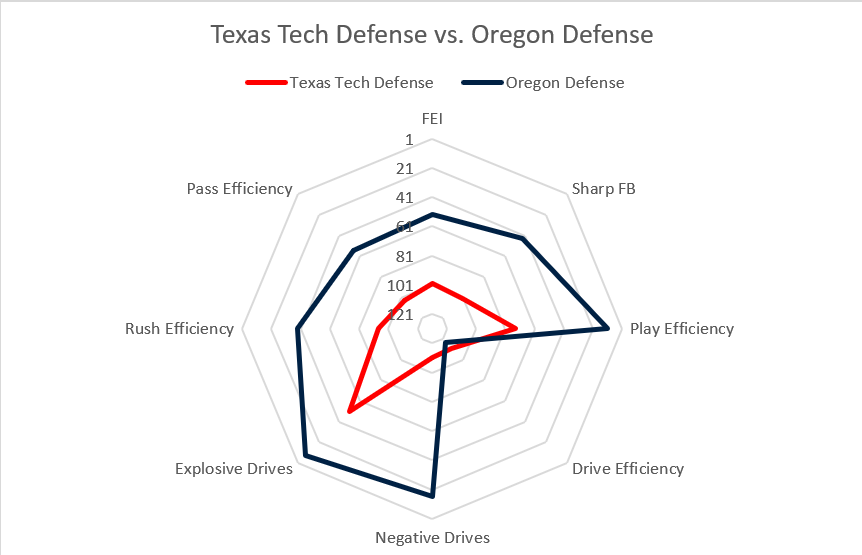 For me, I tend to think that the FCS game on the schedule should be more about your team than your opponent. There really shouldn’t be an area where the FCS opponent should dominate an FBS team. That’s not to say that an FCS team can’t be good or have good players, I do believe that they do, but from a position-to-position standpoint, Texas Tech should physically have every advantage.

Based on what we are hearing from camp, the offensive line was the position group that I thought would have the biggest battles, but that seems to have shaken out as preseason camp has progressed. The skill positions have seemingly worked themselves out to the point that there will be multiple players that see snaps, essentially a two or three deep at each position. The defense is to play 22 players because there will be a lot of snaps and with those snaps you’ll need a lot of people.

Key #1: Establish Offensive Identity: I’m as curious as the rest of you in regards to how the offense will work. Whether or not the running game will be as featured as it was last year. I think that it has been important to McGuire to take what made Baylor so successful to Texas Tech, and one of those things was a power running game. That hasn’t been Kittley’s forte, but Kittley is a smart guy and think he can figure it out. I don’t know that a lot of us realize that Baylor was 10th in the nation in rushing offense last year and 93rd in passing. I don’t expect those types of numbers, but I don’t expect Texas Tech to be 119th in rushing and 1st in passing, as Western Kentucky was last year.

Key #2: Maintain the Lanes: Defensively, coordinator Tim DeRuyter talks about being multiple, playing everything from a 4-2-5 to a 3-3-5 to a 3-4-4 to a 4-3-4, you name it, I think it is in the playbook. What I’ve seen previously is that teams that are focused on doing multiple things end up out of position, which opens up lanes that create opportunities for opponents. I think we’ll hear more about lanes an fits as much as we previously have and if there can be precision in how the lanes are defended, then we’ll see a successful defense. Last year, Oregon was 8th in the country in defensive explosive drives according to Sharp Football and 11th in play efficiency. I would take that absolutely.

Key #3: Win for McGuire: This is Joey McGuire’s first football game as a college head coach, one that won’t necessarily define him, but it could if it ends poorly. I don’t expect it too, but given what McGuire has done for the team, the program, the players, to make this the toughest and hardest working team that he can create, then I think he’ll get a game-ball by the end of the game and we’ll see video of it.

Will this FBS be different? It seems as if every year I write about how we as fans cannot gloss over poor performances against FBS teams. Those are usually harbingers of what is to come, not always, but oftentimes problems that arise against FBS teams are problem areas for the team moving forward. There are typically excuses that we all make (I know I’ve made them before) and everyone is getting the rust out of their system, but I can darn near guarantee you that if there are significant deficiencies those will absolutely be addressed moving forward by the coaches.

What it takes to feed the football team.

It’s never fun to pick a game without the spread. I’d like to think that Texas Tech wins by 30, that’s sort of what I’m thinking, which may not seem like enough points, but at 30, I’d think about where this will go. Murray State isn’t a high-tempo offense and I think pretty ball-controlled overall so I don’t know if the number of possessions will be there to get to 30 (or at least that’s my thought).