A prediction I regret immediately.

Advanced Stats: A step behind in just about every major advanced stats metric. Is this because of Texas being Texas or this is what the stats play out. It would be difficult for every advanced stat to have that same type of bias so you sort of need to believe that Texas is the better teamby a decent margin. 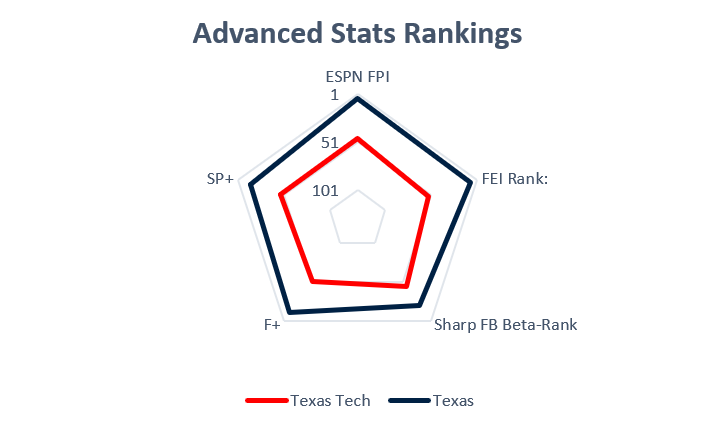 Texas Tech Offense vs. Texas Defense: What a mess of a chart for Texas Tech. The offense is struggling for explosive drives and running the ball mightily. The pass efficiency is good, but the pass defense is also good for Texas. On a play-by-play basis, Texas Tech is better and my hope is that the home crowd helps the offense because I think the offense is going to need it. 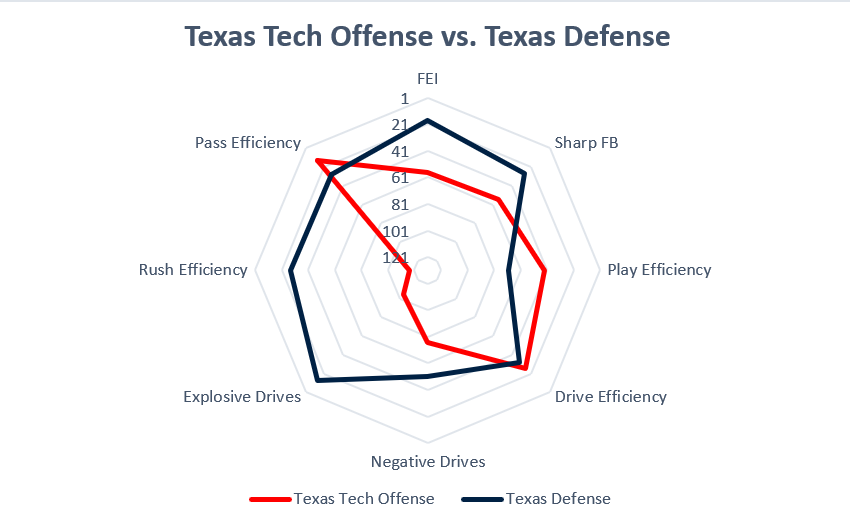 Texas Tech defense vs. Texas Offense: The defense is playing really well, but isn’t efficient at getting teams off the field on drives. Other than that, Texas Tech and Texas are pretty well matched, but statistically Texas is better in just about every metric, just a step behind. 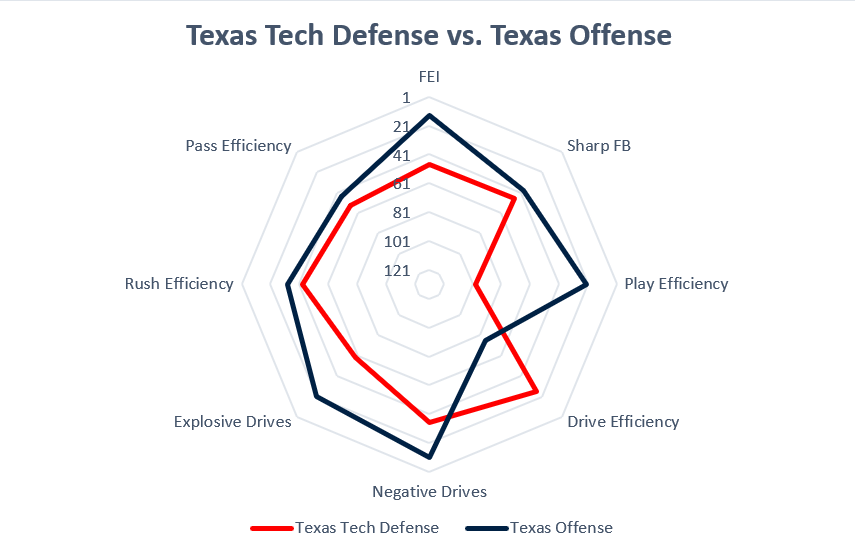 Key #1: Stopping Bijan: We’re sort of coming into focus about what needs to happen to win this game and priority #1 will be stopping Bijan Robinson the mustard-influencing running back who has run for 311 yards, averaging 104 yards a game, 6 yards an attempt, with 5 touchdowns. The offense, at times, is absolutely gears to have two lead blockers for Robinson and he is clearly the most electric player for Texas.

Key #2: Stop the Turnovers: Texas Tech is 125th out of 131 teams in turnover margin, having gained 2 total and losing 8 for a net of -2.00 turnovers per game. For comparison purposes, Western Kentucky was 12th in the nation last year in turnover margin having lost 20 turnovers including 12 interceptions. Texas Tech has thrown 7 interceptions thus far this year so things are way ahead of schedule and Texas Tech hasn’t even gotten to tougher part of the schedule. I’m not as concerned about getting turnovers for the defense because they are playing so well, but I am very concerned about the turnovers and Zach Kittley’s offense is predicated on the the communication between quarterback and receiver. I think Smith has to make quicker reads and get rid of the ball. Maybe the big huge plays aren’t there, but alternatively the big losses aren’t there either. I should also mention that UT has 1 turnover lost and 2 turnovers gained.

Key #3: Hold the Offensive Line: Texas Tech has allowed 10 sacks on this early year and I get the idea that Smith is holding onto the ball too long, but those 10 sacks are good for 116th in the nation. Texas only has 6 sacks on the year, but they had 7 quarterback hurries against Alabama and hassled UTSA for 4 while breaking up 3 passes. This all has to work in concert, but the offensive line has to be better at holding their own, to not allowing Smith to be pressured and to

How will the offense respond? I think what we’ve seen thus far is a pretty consistent defense. They have holes at times, but the defense has been good. What they haven’t seen though is an offense that is averaging 500 yards a game (I know it’s early in the season). I know what the offense needs (see the chart above) but trotting out an offense that is taking advantage of what they’ve been given would and not try to take deep shots. Of course, I think those shots were there against Alabama, but it was the wide receivers for Bama that weren’t doing their job. I think Zach Kittley will figure things out and I think that McGuire wants Kittley to put Donovan Smith in spots to succeed and not turn the ball over. Everyone has to pull their weight, the line has to give Smith just a second more of time and the running backs need to be a bit better with the receivers catching all catchable passes. It’s going to take the collective I think.

Associated Press: No. 22 Texas visits Texas Tech in Big 12 opener for both

Dallas Morning News: Texas Tech prediction: Could the Longhorns lose in Lubbock for the first time since 2008?

You don’t hug someone’s neck like that unless you really care about someone.

I am not feeling great about this game and I don’t know why. I sort of ignored the advanced stats last week, thinking that Texas Tech would overcome the deficiencies and that the Texas Tech offense would prove to be too difficult for the NC State defense. That the offense would travel better than I thought. That didn’t happen and although parts of the Texas Tech defense played really well, the special teams and offense has to be more consistent, explosive, and better. I also think that I’m probably over-reacting after Saturday’s game. The other thing that I can’t shake is that the line opened at Texas -4.5 and now sits at -7 which that money has continued to roll in on the Longhorns. Texas is 6-0 straight up when playing on the road against Texas Tech, but 1-6 against the spread against Big 12 opponents and 1-4 on the road against Big 12 opponents. I’ll take those points, but Texas to win (I hate myself at this point and will celebrate greatly if Texas Tech wins).