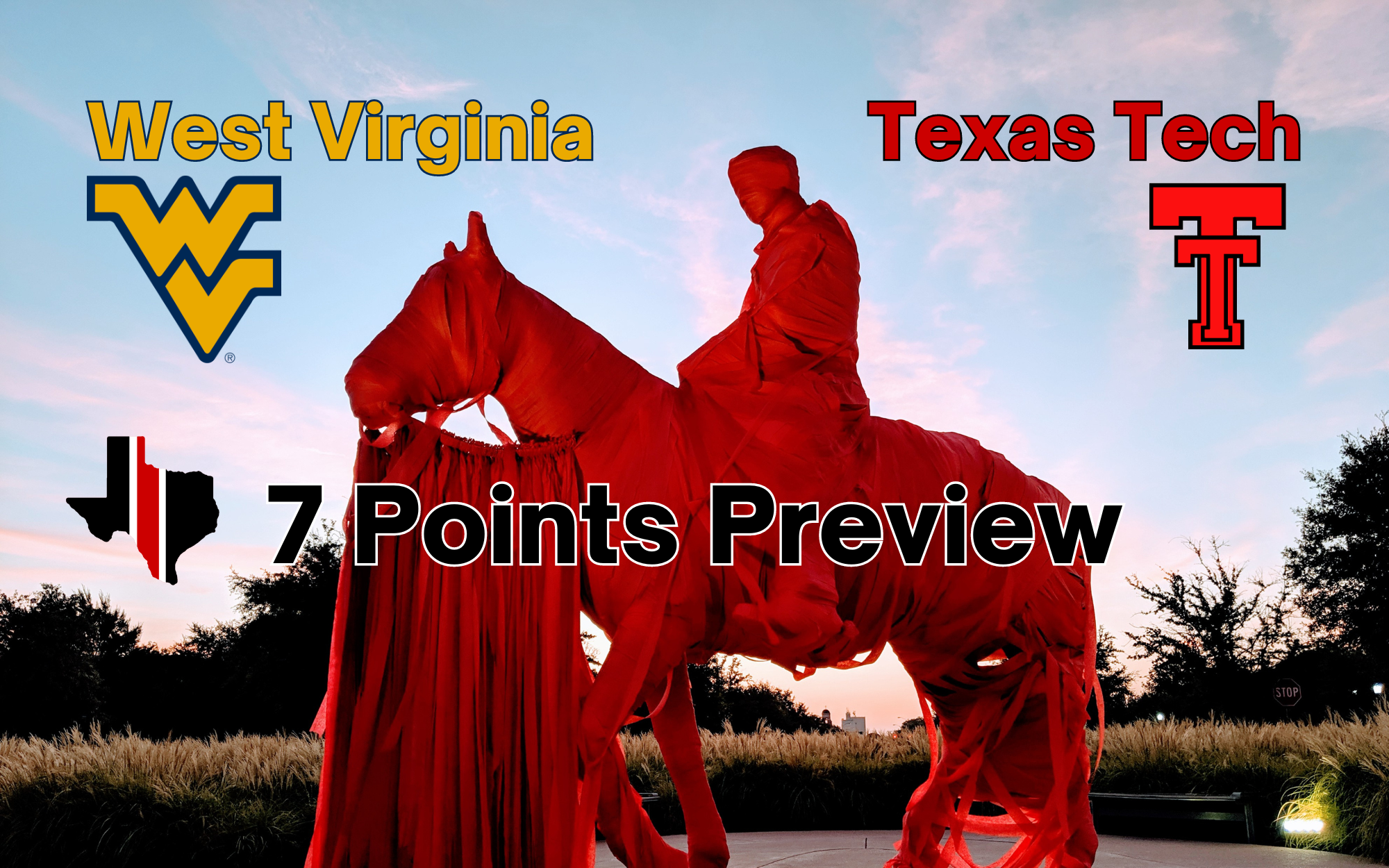 Advanced Stats: These two teams are pretty even across most sites except for Sharp, which we’ll get to the “why” here in a minute. 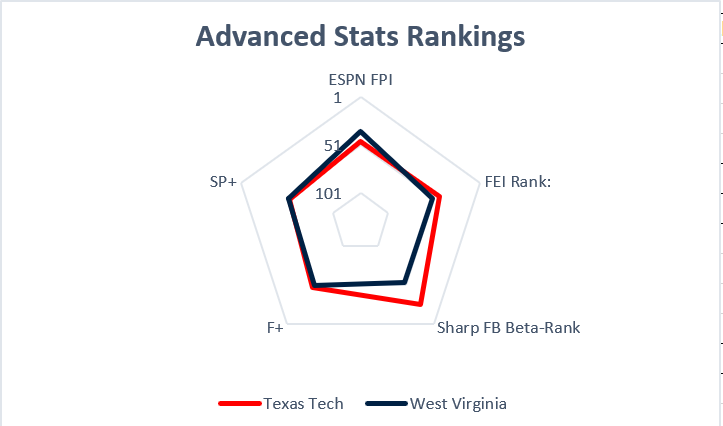 Texas Tech Offense vs. West Virginia Defense: Goodness, what a mess for West Virginia. I question if I even did this correctly, but I did. Texas Tech has some clear advantages here, but pass efficiency and drive efficiency are the biggest ones for sure. Sustain drives and pass the damn hell out of the ball. 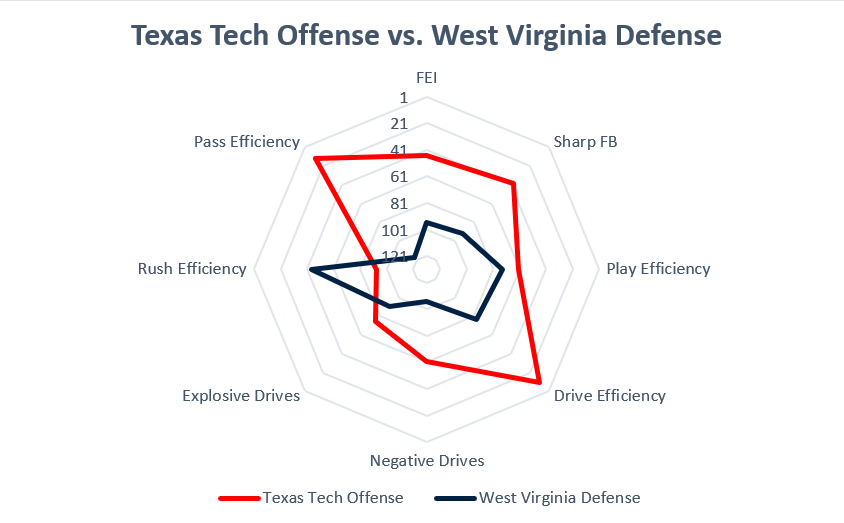 Texas Tech Defense vs. West Virginia Offense: Sharp Football has Texas Tech as having one of the top 25 defenses in the nation and that’s an outlier for sure. All of these numbers other than FEI are from Sharp and Texas Tech has a good pass defense, decent rush defense, is getting teams off the field on drives and decent at explosive drives. 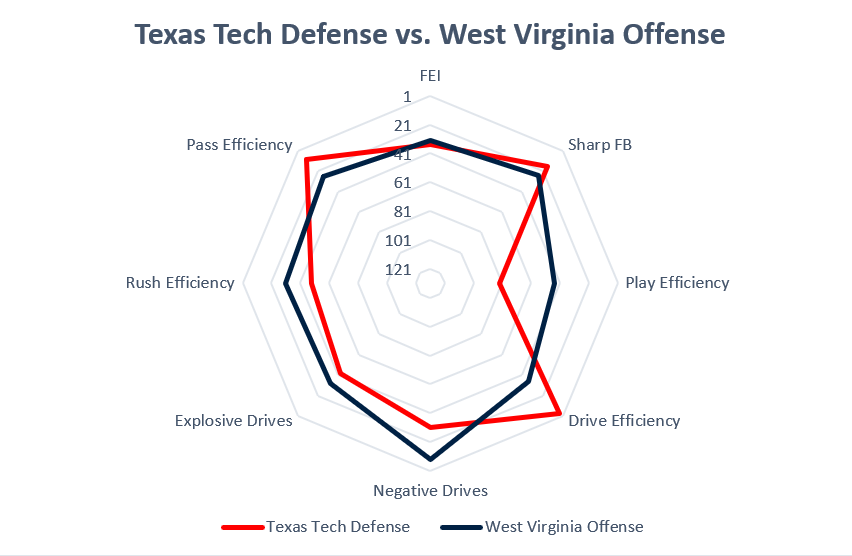 RB CJ Donaldson, Jr. or Tony Mathis, Jr. This is sort of a pick-your-poison situation. Donaldson burst on the scene as a true freshman averaging 78 yards a game in 5 games and 7 yards a carry, went down with an injury and is likely back for Texas Tech. Mathis isn’t as explosive, but still averages 5 yards an attempt, 77 yards a game and is just a tough runner. I should also clarify that Donaldson is a 240 load and that means that Hutchins, Bradford & crew will have a tall task in stopping Donaldson and Mathis.

QB JT Daniels is really the only quarterback who has played this year, in 6 games he’s completing 64% of his passes for 247 yards a game, 6.8 yards per attempt, 9 touchdowns and just 3 interceptions. If Daniels drops back, he’s likely passing, just 14 rushing attempts on the year. With the Texas Tech pass defense playing so well, this should be terrific.

WR Bryce Ford-Wheaton Texas Tech probably does have the cornerbacks to play with Ford-Wheaton, but he’s still 6-3/224, has 40 receptions on the year, 463 yards, 77 yards a game, nearly 12 yards a catch, and 4 touchdowns. Fellow receiver Kaden Prather is no slouch, 6-4/211, but isn’t as productive.

DL Jordan Jefferson and Dante Stills Both are absolute units, Jefferson is a 310 tackle with 4 tackles for a loss and just 15 tackles. Stills is who everyone talks about and with good reason, 2.5 sacks on the year, 4 tackles for a loss, 3 quarterback hurries, and a forced fumble. We can almost guarantee that one of these two guys or Kpogba will line up over Rogers at left tackle and when we last left this situation, there was some discussion about Ty Buchanan moving to left tackle as this has been a spot where there’s been a lot of pressure on the quarterback. Regardless as to who is there, Rogers or Buchanan, there will be pressure coming from that spot.

LB Lee Kpogba Kpogba leads West Virginia with 38 tackles, has 3 TFL, 2 sacks, and 4 quarterback hurries. Thisshould let you know that he along with others are rushing the passer and McGuire said that the pressure was coming from multiple places and WVU was very multiple defensively.

Key #1: Thid & Fourth Down Chaos: West Virginia has proven to be really efficient on third downs, 11th in the nation in conversion rate at 75% and they are 15th in 4th down conversion rate. On the other side of the ball, West Virginia is 95th in third downs allowed and 114th in fourth downs. This would seem to be pretty simple, which is to stop the Mountaineers from converting and then to stack your own conversions as much as possible.

Key #2: There Will Be Yards Available: West Virginia is having issues defending the pass and this would be the one real strength offensively for Texas Tech. I think that Morton likely gets the start with Shough maybe backing him up, not sure. Regardless, West Virginia is tough to run on and there may not be a reson to bang your head against that wall.

Key #3: West Virginia Will Eat Up that Clock: WVU is 13th in time of possession and looking at their stats, West Virginia is going to run the ball and they are successful at that. Eating up the clock will actually create fewer opportunities for the Texas Tech offense, and while the scoring offense has been fine, I think that points per play for Texas Tech wouldn’t be as efficient as it maybe could be. In fact, Texas Tech is 101st in points per play, while West Virginia is 41st.

More 4th Downs? This from ESPN’s Bill Connelly about Texas Tech’s 4th down philosophy, which is that Texas Tech is going for it on 4th down 4 times a game, and although there are statistical arguments to be made for going for it, it may be more about that too, maybe who Texas Tech’s coaches really are:

I’m going to follow Mina Kimes’ lead and declare that we’re looking at fourth downs all wrong. So many coaches and fans (and announcing crews) look at the uptick in fourth-down attempts somewhat skeptically, as if nerds and their spreadsheets and pocket protectors are having an undue and untoward impact on the way the game is being played. Nonsense! We should instead look at it as an uptick in bravery and alpha behavior. And there’s probably some poetry in the fact that a team from West Texas, with its gun-slinging mascot, is leading the way in this rugged, bravado-heavy activity. Keep showing us the way, Tech. Keep playing your fearless ball.

That’s it, right? It’s probably not all about the stats, but about the attitude. I sort of appreciate that.

These bells tell a story.

I really liked the spread when it opened, with Texas Tech as a 4.5 favorite and now with it being at 6, I’m not as comfortable. The thing that’s throwin me for a loop is that most of hte advanced stats think that West Virginia is better and the outlier is Sharp. The one thing that I did notice is that West Virginia is much worse o nthe road than they are at home, especially on offense. They give up fewer points, 34 to 28, on the road, but they score 50 points at home and 28 on the road. And the same is true for Texas Tech, 44 points scored at home and 24 on the road, while only allowing 24 points at home and 35 on the road. I’ll take Texas Tech to win, but West Virginia to cover.