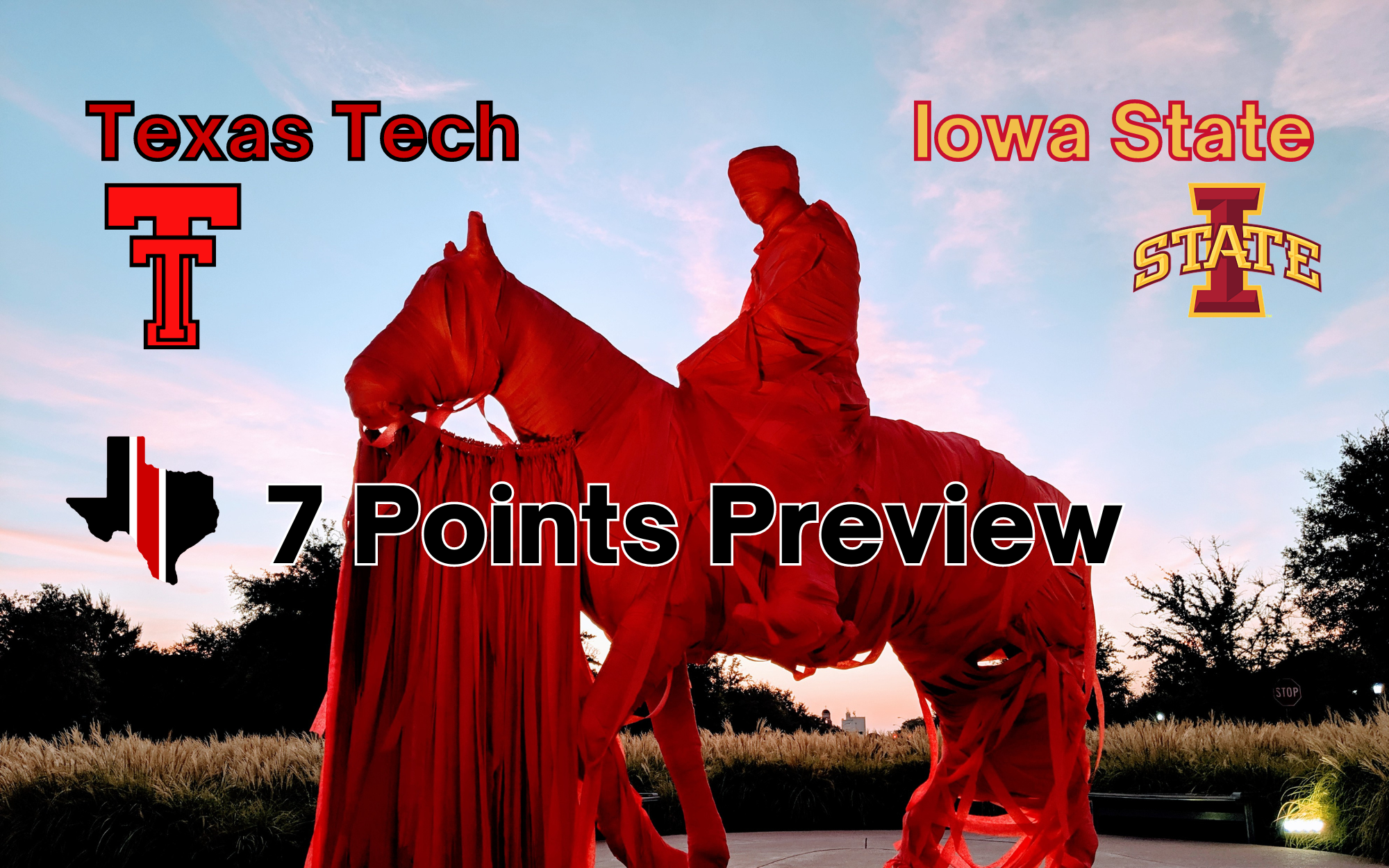 Need a win on the road.

I don’t know where to put this, but the human part of me feels like that I’d be failing at what I do here without acknowleding the senseless deaths of the three football players at Virginia. Maybe this doesn’t hit as close to home in a normal sitation, but Jacob Rodriguez was there just last year. I wanted to say their names and ask that you think a good thought for their families: Lavel Davis, D’Sean Perry and Devin Chandler. I know there is a fourth player, Mike Hollins, who is in ICU.

Advanced Stats: Most everyone has Iowa State, even though they are 4-6 and 1-6 in the Big 12, as being slightly better than Texas Tech other than Sharp Football, so they are always the outlier. 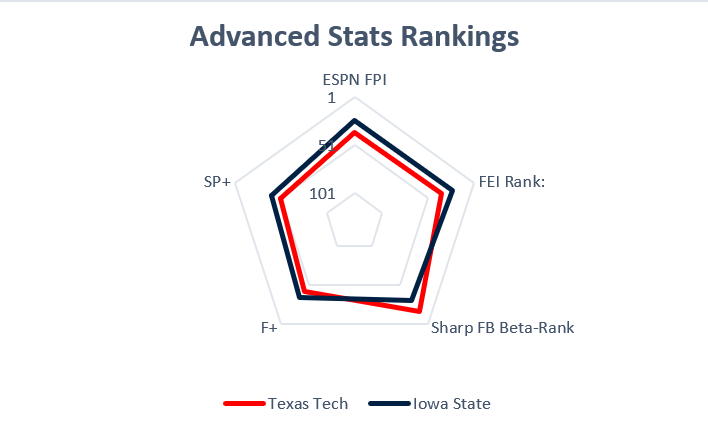 Texas Tech Offense vs. Iowa State Defense: Alert! The Iowa State defense is got-damned elite. Texas Tech’s offense is top 40 or so, but when you see a team that’s touching almost every point like Iowa State, that’s insane. 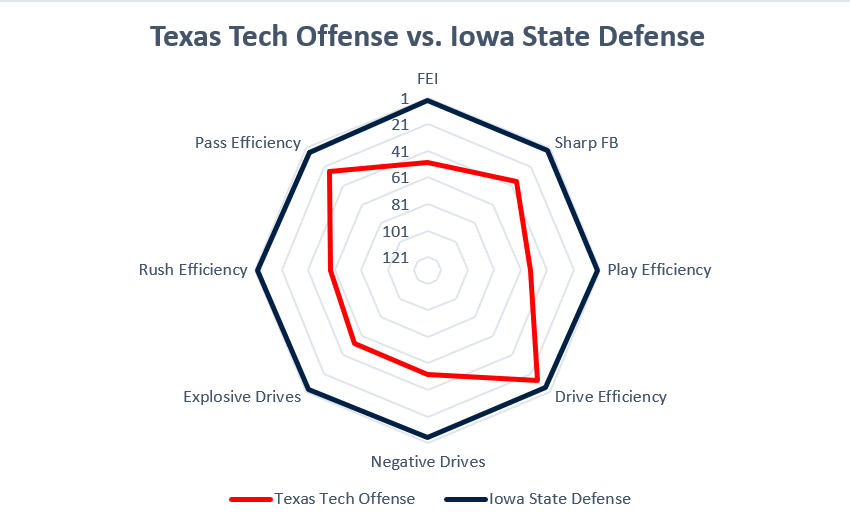 Texas Tech Defense vs. Iowa State Offense: And as dominant as the Iowa State defense is, the Iowa State offense is just lackluster. Other than being decent as passing, it’s just not good and you’d think that if the offense can just do a little something, the defense will take care of business. That changes without Tyree Wilson, but the sum of the parts of the Texas Tech defense is pretty good. 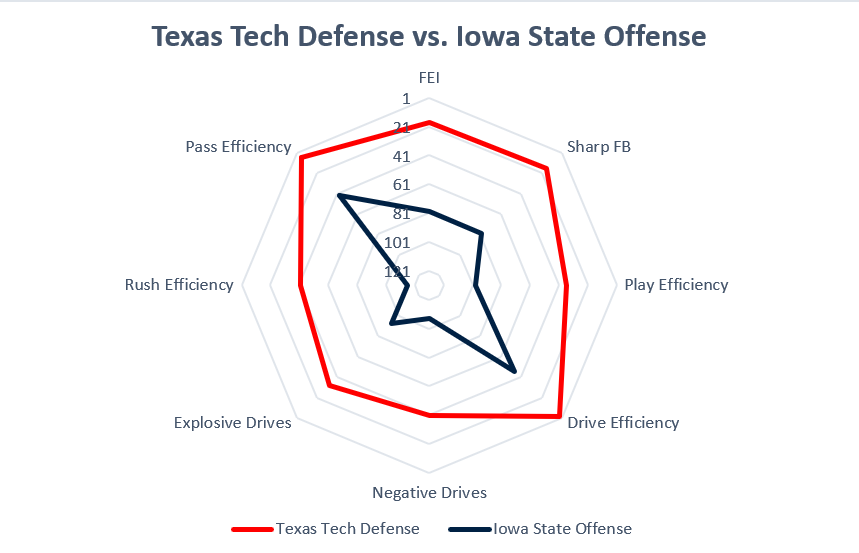 DE Will McDonald (6-3/236): McDonald is a force, one of hte players mentioned in McGuire’s press conference this week. He’s got 30 tackles, 5.5 tackles for a loss, 4.0 sacks, 3 passes broken up, and 6 quarterback hurries. He’s definitely one of the guys on that defense that’s creating a ton of havoc.

DL MJ Anderson (6-3/275): A big boy in the middle, just 26 tackles, but he’s got 8 tackles for a loss and 3.5 sacks. My guess is that Anderson is a highly athletic tackle that’s able to use that athleticism to break up plays on a regular basis. The offensive line will be something to watch, how they handle the cold and how they handler Anderson and McDonald.

WR Xavier Hutchinson (6-3/205): Hutchinson is a high-end and difficult to stop receiver for iowa State. He already has 97, yes 97, receptions on the year, 1,059 yards for 10.92 yards per catch, and 6 touchdown. Hutchinson has 6 100-yard receiving games, 5 of them happened in conference play, which means that he’s not padding his stats. Over the last 4 weeks, he has 10 catches each game. Iowa State throws him the ball a lot, so no matter who is guarding him, he’s likely to get a ton of work. I don’t know what DeRuyter will do, but likely rotating on Hutchinson might not be a bad idea.

QB Hunter Dekkers (6-3/206): Dekkers has been really the only quarterback this year, replacing Brock Purdy. He hasn’t been terrible, but with a lot of young quarterbacks, stretching the field is an issue as well as turnovers. Dekkers has completed 67% of his passes for 264 yards a game with 6.6 yards per attempt, 17 touchdowns and 13 interceptions. Dekkers has “run” the ball 73 times this year (about 7 rushes a game), but only for 44 yards, which means to me that he’s probably not making really quick decisions and getting a ton of sacks. Dekkers’ interceptions come in bunches, 3 against Oklahoma in a loss, none against West Virginia for a win, and then 3 last week in a loss to Oklahoma State.

Key #2: ISU Offense Isn’t Great: If there’s one good thing, it’s that Iowa State is pretty terrible on offense. They are 118th in rushing offense, which is a huge departure of what they’ve been in the past. The Cyclones throw the ball okay, 32nd in passing offense, but only 107th in the nation in terms of scoring the ball. One more item, which is that they have trouble scoring in gemeral, 105th in the nation in red zone offense.

Key #3: 1st Down Offense: One of the best things about the Texas Tech offense is that it actually is pretty good on 1st down, in fact Texas Tech is 3rd in the nation in 1st down offense and if there’s anything that sets you up for success, it is gaining those yards on offense. A bitterly cold game won’t befun, but it will be a lot more fun if Texas Tech is able to churn out first downs and make those 3rd downs much easier to attain.

Can Texas Tech score? I’ve been doing this a long time and I don’t know that I’ve ever seen a defense that is that elite. Just so good at everything, usually there’s a weakness, but there’s not with Iowa State. Zach Kittley is going to have to figure out how to pick and prod that elite defense enough to put points on the board. I think we’ll see more of the same of what we saw last week and maybe even more Donovan Smith. The wind should die down by the time the game starts, but the wind is supposed to be howling during the day and should subside by the time the game begins. It would also be nice to utilize the tight ends, much in the same way that Iowa State utilized those tight ends against the Big 12 for so many years. I’m keenly interested to see how Kittley attacks the defense.

Grades, much better, especially at quarterback and running back.

Fascinating and see how those 4th quarter points go in the negative.

Apologies in advance if a value looks a tad off. Its likely due to a missing game from the PBP data. Should still give a fairly accurate representation, though.#CollegeFootball pic.twitter.com/CsYetvG52k

Where Iowa State has the edge: I’d say exploiting Texas Tech’s leaky rush defense, if the Cyclones had a rushing game to exploit it. I can only imagine what it would mean for the offensive line, and the entire offense, if Norton has his first 100-yard rushing game. That would be an enormous boost, especially if it came in a victory. The Cyclones’ biggest, and most consistent advantage is the defense.

Where Texas Tech has the edge: Iowa State has 14 turnovers in seven Big 12 games. Dekkers has six interceptions in the past three games. The Cyclones have lost five times when committing two or more turnovers. They’re 3-1 when committing one or fewer. Translated: Knock the ball loose or pick off a couple passes and history says Iowa State loses.