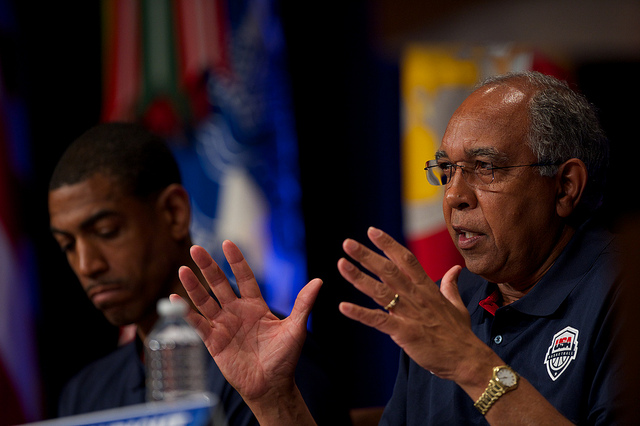 (Photo before the jump from U.S. Department of Defense @ Flickr)

Sophomore guard Randy Onwuasor will transfer out of #TexasTech, he tells Scout.

Randy becomes the second player to exit the basketball program with the intentions of transferring to another team. The first was Foster, which we all could have seen coming. When looking back at the end of last season we could have guessed that Onwusaor would fall into that category as well. In the last 8 games of the season he did not receive much playing time, significantly less than he had seen in the beginning of the season. Turner, Gotcher, Williams, and Evans made up the bulk of our core at guards to finish out the year.

Randy had struggled to get a real grasp on the offense that Tubby Smith had put out on the court. He had a turnover problem, and that was accompanied by a shooting problem. He only made approximately 31% of all his field goals on the year, and only shot 24% from downtown. Add to that a free throw percentage of 63% and you might realize why he was riding the bench.

I hope Randy gets a fresh start wherever he ends up, and we can cheer for him to have success in the future. He always looked to be giving a full effort while out on the court playing for the Red Raiders.

A slight concern that I do have is that this is Tubby Smith’s 2nd recruit to leave the program. Alex Foster was a Tubby Smith guy that followed the Coach to Texas Tech from his commitment to Minnesota. And, Randy Onwuasor was plucked out of Inglewood, California by our coaching staff. The guys that are leaving to go to other schools can no longer be chalked up to prior coaches (or staff) who brought those players into Tech, or guys that Tubby Smith just had to “inherit”. The hope is that there won’t be anymore transfers after this one.