Ed. Note: Before you get going, this post is about my weekend and not about Texas Tech athletics. If you don’t care about that, then do not continue reading.

Some of you may not know, but last weekend, I was out of town. My wife and I haven’t had any sort of vacations over the past two years, other than a day or two last weekend in San Antonio last year and this year, we had a long weekend in Hot Springs.

I found Hot Springs to be a bit strange in that it was a little like Gatlinburg, Tennessee, in that there are things to do in Hot Springs, namely the hot spring bathhouses that are on the main drag, but also there’s go-karts and things like that. The main drag, and there’s only one, has a ton of shops and there were quite a few people walking up and down the main drag every time that we stopped for a bite to eat.

I’m a pretty restless soul and I don’t have the personality to just sit there during the day, or shop for any extended period of time. I didn’t want to go sit in the bathhouses because that didn’t sound like fun. I am lucky in that my wife really does like to hike. Now, there’s a line for us and it’s one that I don’t try to push. My wife likes to be able to take a shower at the end of the day and she likes to clean up and go out for a sit-down dinner. My wife is not a fan of spending the night out in a tent and that’s okay. I figure I’m pretty lucky to have someone that will go for long hikes.

I wasn’t sure how I was able to talk my wife into going to Hot Springs, but it was mainly because there was a National Forest there and we would be able to do some hiking and walk around town when we wanted.

So, we arrived in Hot Springs shortly after lunch and we found our way hiking on the east mountain in Hot Springs. The day was a bit warm, but we hiked and walked for three hours. The trail wasn’t that great, but we still were able to hike and we got to talk for those three hours.

On the morning of day two, we made our way to Garvan Gardens, which is on Lake Hamilton and it was more like an arboretum than a national park. Garvan Gardens is land owned by the University Arkansas and was given to the university by this woman (assuming her last name was Garvan), over 200 acres. It’s a beautiful setting and some pretty amazing views at the end of one of trail that ends at the lake. And these really weren’t trails, but really well-manicured pathways. 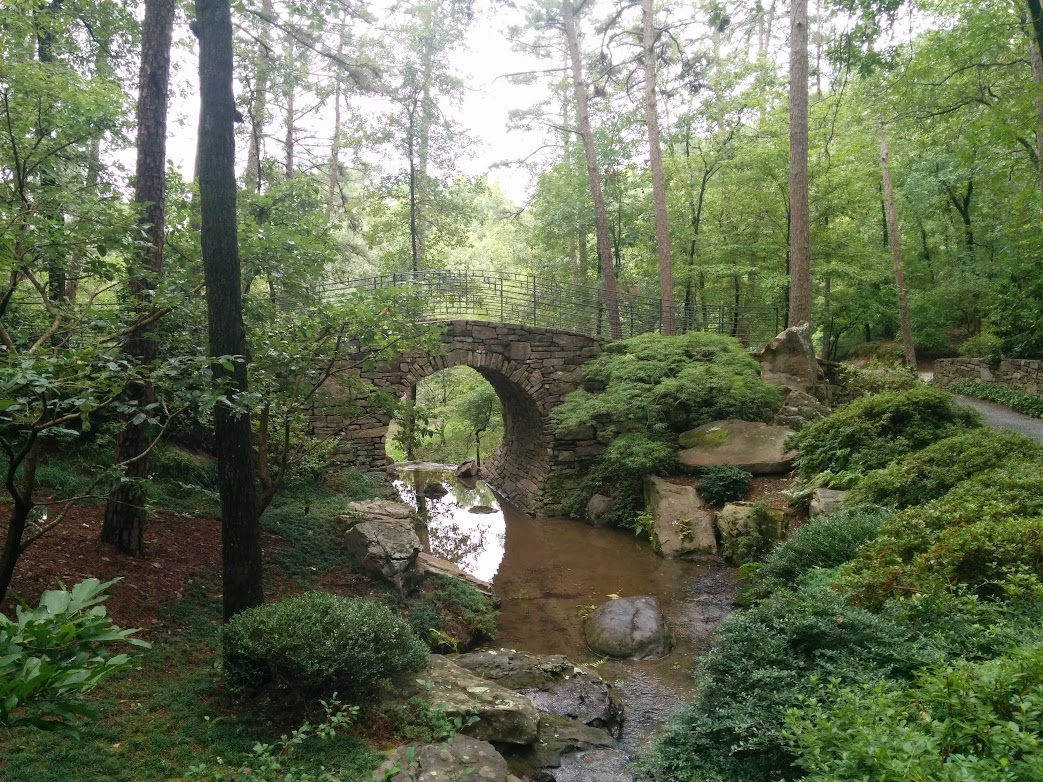 We then went back into town and had an early lunch at a local brewery in one of the old bathhouses. It was very good eats and very good beer. We then headed back into the national park and we then hiked for the next four hours or so with the end of our hike at the top of the east side of the mountain. At the end of each hike on both days, we cracked open a can of beer that I had and my wife opened a can of wine (yes, a can of wine, she was super excited about that) while we enjoyed the view. The last day was the best day as we finished at the top of the mountain and the view was nothing short of spectacular, at least for a guy from the Dallas area where the greatest elevation is an ant hill. 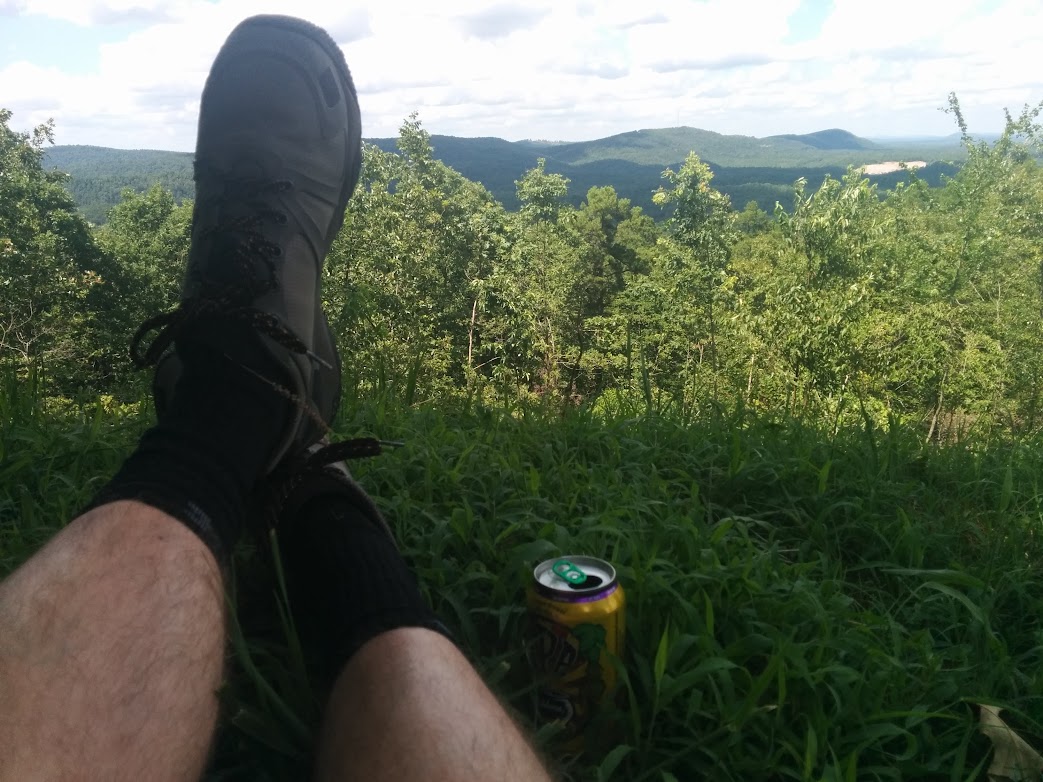 The point with all of this wasn’t necessarily to tell you how much we hiked and how kick-a we are, but as we hiked on the second day, I realized that we did not run across anyone on Friday and we crossed paths with only two other couples for the entire afternoon hike on Saturday. Meanwhile, there are scores of people on the main drag in Hot Springs walking up and down the street, somewhat aimlessly and there are these really terrific views just waiting to be seen. 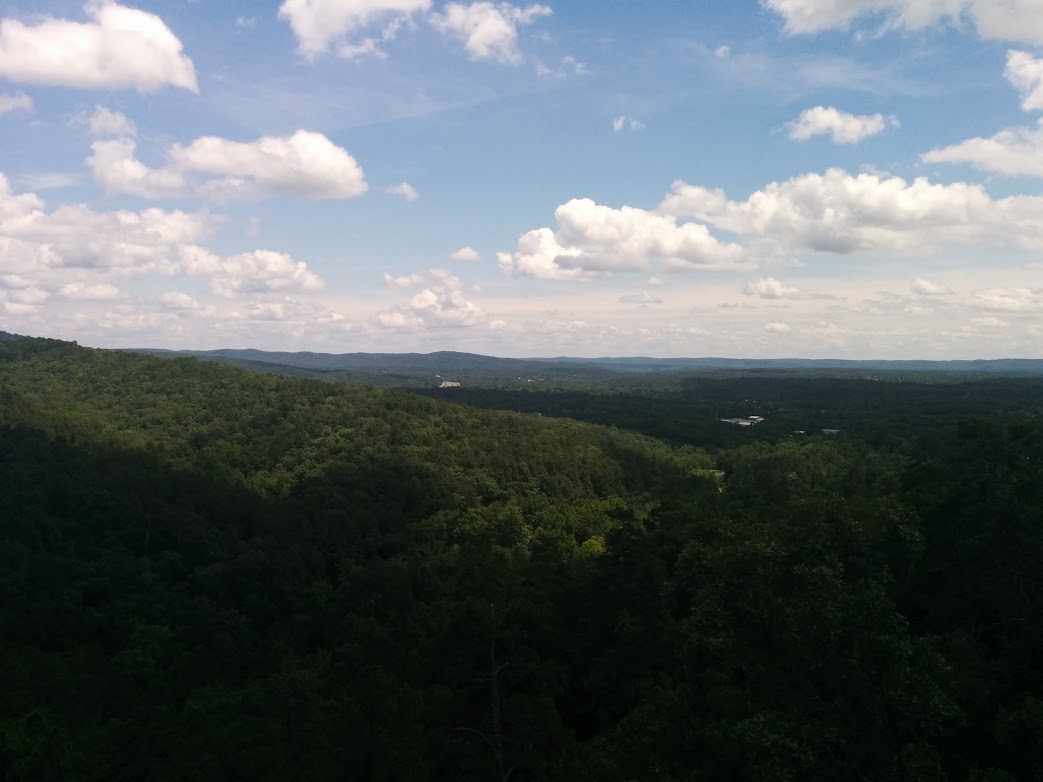 But no one was here.

I don’t know if I’ll ever really get that, the idea that there’s this really terrific National Park and no one was really enjoying it. I will say that while we were drinking our alcoholic beverages, there would be people that would drive up to the area. Get out of their car. Take a look. Get back in the car and drive away. There’s even a tower where you can take an elevator up and look around. We did this, but we stayed up there for about a minute as we were quickly bored. I snapped a few photos and we left. We figured that we could find better vistas and we did.

I should also say that driving up to see views is sometimes completely acceptable. There are elderly folks that can’t make their way any more and this is the only way that they get to see the park. If anything, it’s a testament to the workforce from the Great Depression, those folks built something that lasted. And they are beautiful. But then there’s the bro, that drives up in his car. Gets out with his other bro. Bro 1 says to Bro 2, “Just some trees and shit.” Bro 2 acknowledges and they get back in the car and move onward and upward.

So here are my takeaways from this long weekend.

1. Hiking with my wife was great. We talked for hours on end as we hiked. It was some of the best conversations we had in months. It was really great.

2. Before this trip, I never really considered that there was a National Park just four hours away from Dallas is pretty cool.

3. The hikes weren’t really very difficult, some were more difficult than others, but nothing substantial. If you can walk up an incline then you can hike the Hot Springs National Forest.

4. The beer at the end of the hikes was pretty awesome. We had not ever done this before, but it was good. At the end of both days, I was sweating and hot and cracking open that beer(s) was really great. We both kicked back, let that breeze cool us down along with the beer. It was pretty good to sit and have a drink.

5. For the first time in a long time, I didn’t bring a camera. Just my phone. I’m one of those people who has totally bought into Google and I use Google for pretty much everything (Gmail, Docs, Photos, etc.), including Google Photos. So I take photos and I don’t have to upload anything, they’re just all uploaded when I plug in my phone  and I’ve got wi-fi and they’re all just there. They’re just all backed up and it’s really terrific. I know that Google is looking at everything that I’m doing and collecting data on me and everything else, but son of a gun, it’s dead-easy.

6. So much of this is about the journey, even if it’s just for a few hours. There are too many times where in life, there’s no payoff at the end and this is one thing, at least for me, where there is a certain payoff, perhaps because there’s a sense of accomplishment at the end. Again, it’s not like I hiked the Appalachian Trail or anything, but there was really something satisfying at the end. Heck, I even just go for long walks in open hay fields (with permission) just to do something like this.

7. For the first time in almost four years, we spent two nights away from Fitsum. We had spent one night away last summer. I hope this hiking business translates to him one day. Five years old is probably too young, but he’s getting close to being able to enjoy something like this. It’s definitely more difficult with kids. No doubt about that. I’m hoping that this balance between being gone for the day and going back to a motel at night will ease the process and then, eventually work our way into full blown camping and hiking with the boys when they’re old enough.

8. The shot with my feet I was apparently bitten by chiggers and I forgot how bad they itch. Clear nail polish did the trick.

9.  The funny thing about Hot Springs is that the hiking trails start right behind the bathhouses. It’s all just right there. And the West mountain is in the middle of an upper middle-class neighborhood. You turn off one street and you see a row of houses and there’s the entrance. The other cool thought was that much of the infrastructure is nearing 100 years old and it’s really standing up to the test of time.