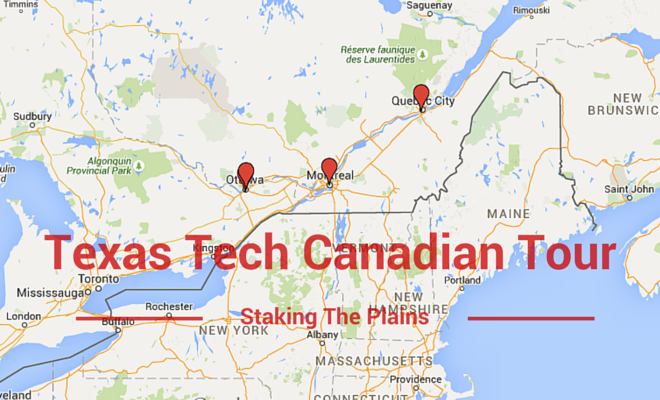 Texas Tech Goes 4-0, Beats Ottawa University. Texas Tech routed Ottawa 84-65 yesterday afternoon (there was no video for the game and thus no highlights) and this appeared to be a pretty easy win. Texas Tech won all four games in their Canadian Tour and will return home today. Here are some box score thoughts:

Take all of these wins with a grain of salt. These are good wins for a young team, but from what I can tell, these Canadian teams are relatively short and obviously inferior in terms of overall talent. These are nice wins and they’re better than losses. Hopefully, this will bleed over into the season.

2015-16 Basketball Schedule Released. Texas Tech released their 2015-16 schedule and the season starts off really easy, with games against Concordia, West Texas A&M High Point, and then is off to Puerto Rico for a tournament. That appears to be the toughest non-conference part of schedule, except for Arkansas later in the season. Texas Tech has no back-to-back conference home games, but does have a few instances of where Texas Tech plays back-to-back, including Oklahoma and Arkansas.